This is the third in a series of eight snippets about how to decarbonise land freight by 2050. Based on a new T&E study, the series will culminate in a public debate in Brussels in September.

To achieve it, the share of rail freight in the EU would need to be increased from today’s 18% to 23%. This would require a significant expansion of the EU’s railroad capacity (as freight demand considerably grows), higher fuel taxes or enhanced road user charges and a modernised, competitive and customer-oriented rail freight sector. 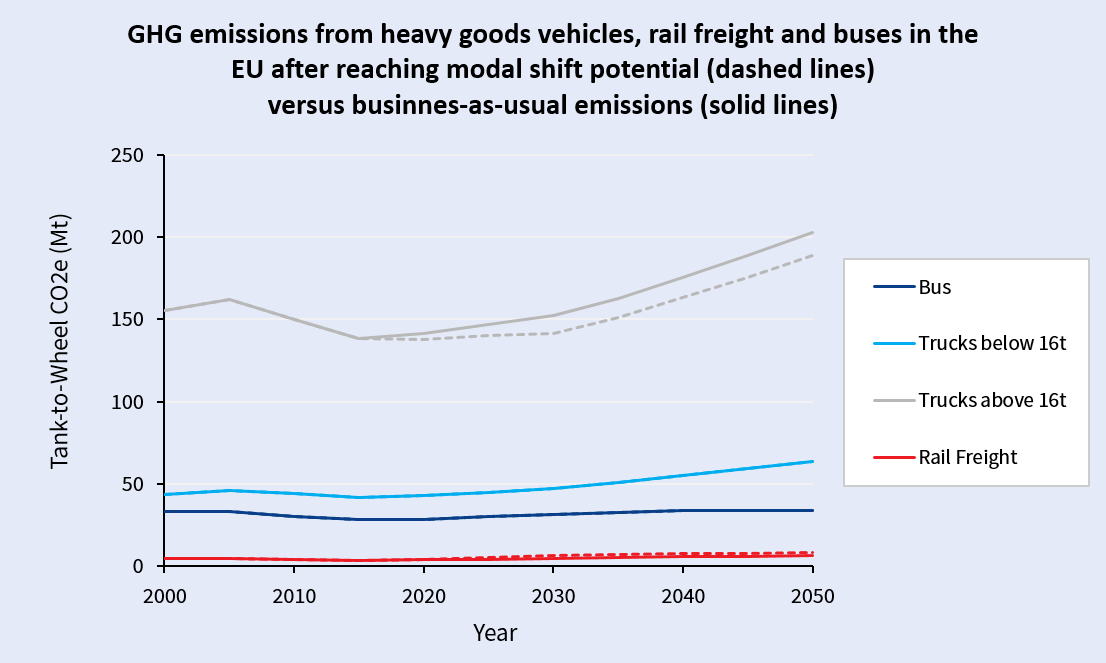 Under the business-as-usual-scenario (solid line), we assumed that without targeted policy measures the modal share of rail would remain at the current 18%, which some already consider optimistic considering the decrease on bulk transport (e.g. coal or mineral oils) over long distances, where rail currently performs best. The completion of the TEN-T network, together with integrated rail freight corridors, will be beneficial to ensure that rail maintains the same market share. We also assumed that the share of diesel locomotives would remain similar to the current share, as locomotives have life cycles of 30-40 years.

On the other hand, we estimated 23% rail modal share only if certain improvements in rail capability would be implemented and rail freight operators would provide greater customer service. This shift in business model will come from a better environment for competition whereby more train operators can compete fairly with the state-owned operators. The cost of road has to increase significantly so that the external costs of road transport (such as air pollution, GHG emissions and infrastructure costs) are internalised. Even if the 23% might not seem that high, this is within a context of increasing freight demand, meaning that the total freight volumes transported by rail would considerably increase. If you look at the very stable and low modal share of rail in the last 20 years, this shift is very high. Also in absolute terms, it means +79% tkm in rail transport up to 2030, which is a huge challenge in terms of the provision of infrastructure capacity.

To achieve it, both member states and the EU as a whole should continue investing in infrastructure so trains can cross borders easily and trans-shipments can become faster and cheaper. Markets should be open to competition; including fair and equal access to service facilities. and independent regulators should be granted sufficient resources to ensure fair competition in the European railway market. Finally, management of tracks should be improved to allocate more capacity and better flexibility for freight trains, while maintaining passenger kilometres.

For more details, have a look at section 3.1.2 of our new study.

Seems a weak finding with simple (massive) assumptions around two revolutions in the sector:

1. The Rise if digital distribution eg CAD design files and close to market 3D printing
2. The proportion of electric powered freight vehicles. Tesla announced <5 yrs as have Scania and other OEMs

3. Does your model treat long dist (>300km) differently to city logistics?
4. What assumption do you make about freight business models
5. Why no mention of the stubborn problem the rise of hugely polluting and easily substituted airfreight.