Emissions from vans – classified as light commercial vehicles of up to 3.5 tonnes – are supposed to be subject to parallel emissions limits to those in force for cars. But while strict car CO2 targets led to a reduction in car emissions, the target for vans had no impact. Vans sales have boomed in recent years and vans are now the EU’s fastest growing source of road transport emissions.

With the Commission due to propose a revision of the current CO2 standard for vans next month, T&E has brought out a 72-page analysis of data relating to vans entitled European van market unplugged: how weak regulation is failing electrification. It shows that while sales of electric cars have broken through the 10% barrier, fewer than 2% of vans sold are electric. 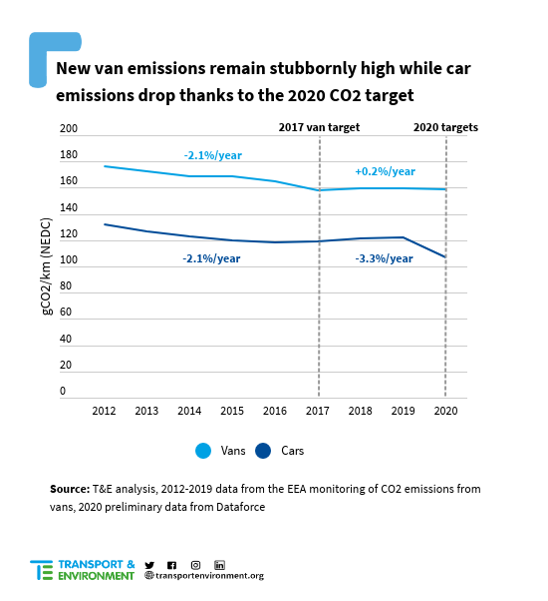 CO2 emissions from vans were just under 180 g/km in 2012, and they declined very gradually to meet the EU’s 2017 target, just below 160 g/km. Despite targets that were introduced in 2020, the EU’s van emissions have not dropped since then.

T&E’s freight manager James Nix said: “Electric vans make economic and environmental sense, but vanmakers don’t have an incentive to sell them. This is leading to pointless pollution. Standards which came into force last year were supposed to make vans cleaner, but vanmakers have had to do almost nothing to reach them. In the case of Volkswagen, their emissions are even going up. With pathetic CO2 targets, the boom in e-commerce is becoming a nightmare for our planet.”

Under current trends, e-van sales will be stuck between 2% and 8% until 2029 unless the EU increases vehicle CO2 targets, according to T&E’s analysis. This is despite smaller e-vans already being cheaper to own and run. A recent T&E-commissioned study found that all electric vans – big and small – will be cheaper to buy by 2026. T&E is calling for the current weak target for 2030 to be brought forward to 2027 – which would amount to a 31% reduction – and rise steadily until 2035. In parallel, a target for e-van sales will also be necessary. 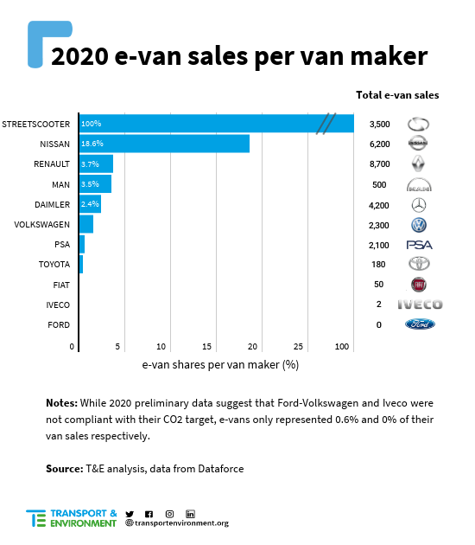 Renault leads the field in terms of e-van sales, with 8,600 models of its electric Kangoo sold in 2020, followed by the Nissan NV200 with 6,200 e-vans sold. But only a tiny portion of all the other vanmakers’ sales are electric vehicles.