At this year’s UN ICAO General Assembly, countries have agreed on a non-binding target of getting aviation net CO2 emissions to zero by 2050 while watering down the only tool at their disposal to try and address the sector’s climate impact. To get to net zero emissions, member states will rely on a scheme meant to offset growth in international aviation emissions called Corsia.

“This is not the aviation’s Paris agreement moment. Let’s not pretend that a non-binding goal will get aviation down to zero. If countries and industry are serious about this aspirational goal, they should stop bullying the EU out of its plans to finally price emissions from departing flights. The EU should  not wait for more empty promises to move ahead with its SAF mandate and pricing of departing flights,” said Jo Dardenne, aviation director at T&E.

Under Corsia, less than a third of international aviation emission would be addressed by 2030, as airlines must only pay to offset growth in emissions above a certain baseline. Major aviation markets like China, Russia, Brazil, India don’t apply the scheme, further weakening the efficacy of the system. The baseline has progressively been lowered as a result of industry pressure, seeking to avoid their climate responsibility, T&E says.

The outcome of the Assembly in Montreal was hugely disappointing – albeit expected – with a baseline of 85% of 2019 emissions levels above which emissions need to be offset, instead of the average 2019-2020. In its original design, before the new watering down by the Assembly, Corsia was already an ineffective scheme, using cheap offsets with no environmental gains.

New calculations by T&E show that with this 85% baseline a mere 22% of total international aviation emissions would be covered by the scheme and therefore offset[1] in 2030. Yet, the price of offsets is so low that there will be no incentives for the decarbonisation of the industry or the uptake of green fuels. On a flight from Europe to the US, with the new adopted baseline, a mere €1.7 would be added to the price of the ticket to offset emissions. Earlier calculations by T&E for the average 2019/2020 baseline had shown that offsets on a flight to New York would cost only an extra €2.4 for a passenger flying from Europe. 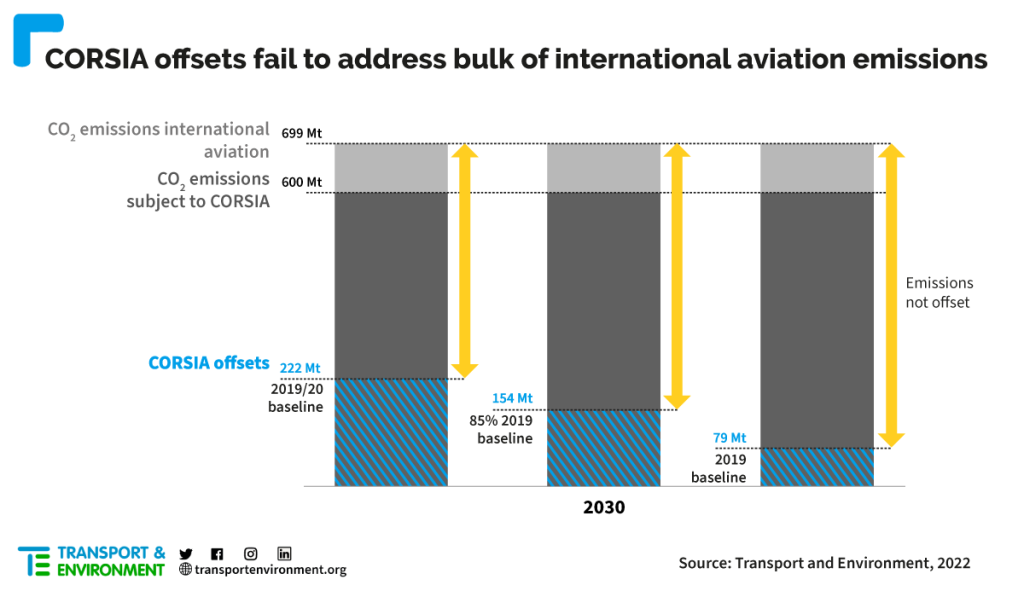 “This Assembly’s decision shows that the ICAO continues to adapt its measures for the benefit of the industry and not for the climate. Countries, and specifically the EU, must see through this smoke screen and move forward with true green measures,” concluded Jo Dardenne.

[1] Under current rates of predicted growth of air traffic, international aviation will contribute to 699 million tonnes of CO2 poured into the atmosphere by 2030. CORSIA offsets would cover only 22% of emissions (or 154 million tonnes of CO2) at the start of the next decade.