The American market sped up in the second half of the year with a whopping 120% surge in sales in the last quarter of 2018 (year-on-year) while Europe saw a more modest 33% increase over the same period. By way of comparison, China sold more than 150,000 EVs in December only, half of the annual sales in the EU.

EU carmakers have been holding back EV sales to ‘save’ zero-emission cars right until the end to comply with stricter CO2 limits in 2020 and 2021.

The suppression of EV sales is apparent in carmakers’ limited model choice and availability. Market monitoring shows that seven all-electric model launches were recently delayed in Europe. This has led to waiting times of between six and 12 months for most plug-in cars. Carmakers also launched fewer new battery electric and fuel cell (ZEV) models in 2018 than 2017. Just seven were added last year, whereas 20 new models will be added in 2019, 33 in 2020 and 45 in 2021.

Lucien Mathieu, E-mobility analyst with T&E, said: “EU carmakers have seen electric cars as a necessary evil to comply with regulation and evidence shows they’ve been suppressing supply and sales in 2018, in an attempt to protect their diesel business. Meanwhile China is racing ahead and even Trump’s America has now overtaken Europe thanks to the Tesla-fueled EV sales boom.” 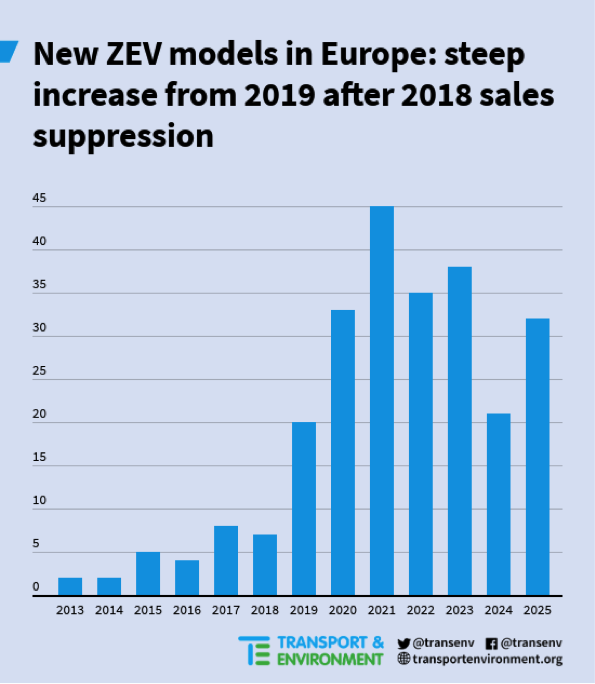 The main driver of EV sales has been clean car policies in the world’s three largest car markets. China’s EV mandate has aided the spectacular growth in electric car sales in the world’s biggest car market, attracting $135.7 billion (€120 bn) of investment with more than half coming from European carmakers. In the US, California’s ZEV mandate [2] and the federal tax credit have fueled the success of Tesla. The Model 3 is now the top selling luxury car in America, accounting for 68% of battery electric (BEV) sales in Q4 2018.

While Europe might have lost the 2018 battle, the race is still on. In addition to ramping up the launch of new BEV models in the next two years, the European market is showing good potential for sustainable long-term growth. The EV market is shifting towards more BEVs (+53%) and some countries have reached all-time sales highs 8% EVs in Sweden in 2018 and more than 30% BEVs in December in the Netherlands, for example.

Contrary to the US, the European market is not dependant on one brand (Tesla) and has a wide diversity in EV sales, which is also a sign of maturity. Finally, carmakers are signing off on important global investments in electro-mobility. European carmakers are investing about $163 billion (although 42% is directed towards China), with Volkswagen alone accounting for $91 billion, almost one-third of global investment in EV and battery production.

Lucien Mathieu said: “The car industry is gearing up to comply with the 2020-21 CO2 standard and will soon start boosting the sales of plug-in cars. This is a unique opportunity for carmakers to stop seeing electric cars as a pure compliance strategy, strengthen the competitiveness of Made in the EU and start to seriously address climate change.”

Transport & Environment modelling [3] shows that the last internal combustion engine (ICE) vehicle should be sold in the early 2030s if the car industry is to contribute its share to limiting global warming to 1.5C degrees and achieve zero emissions in 2050.

US vs EU EV sales.png 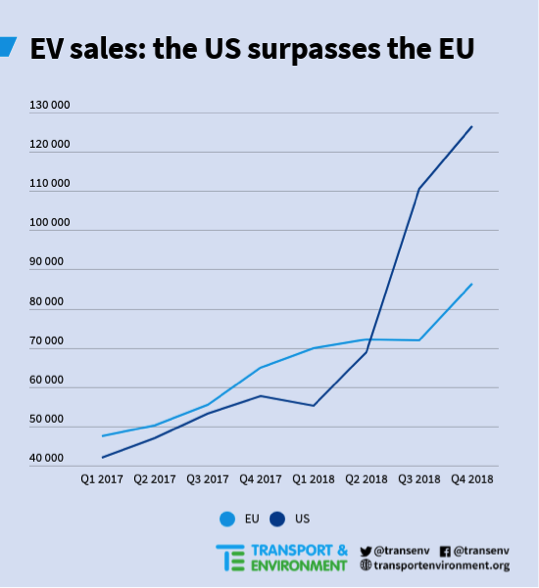 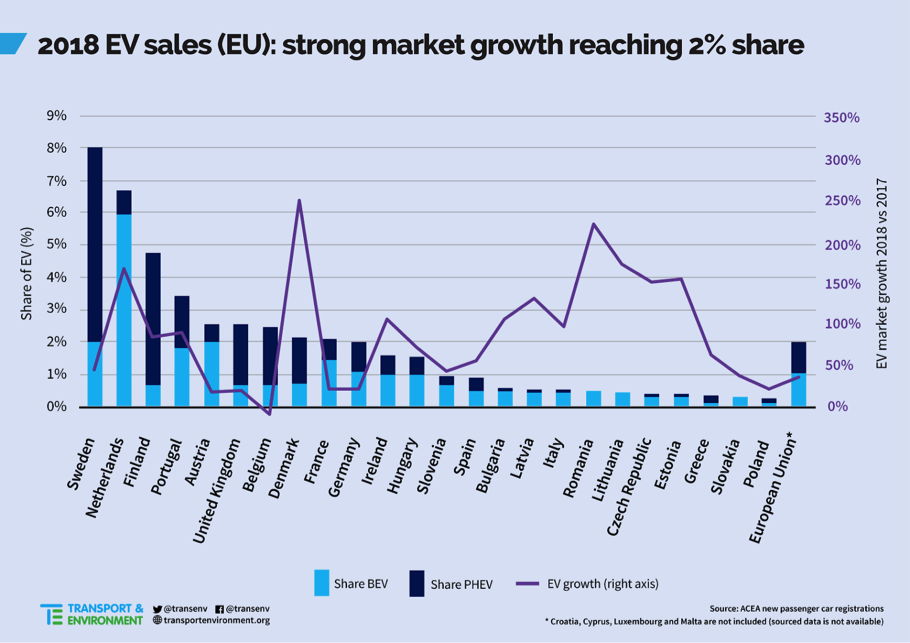