The study, carried out by Profundo on behalf of T&E, shows that BP, Eni, Repsol, Shell and TotalEnergies are responsible for huge societal costs through pollution, deteriorating public health and carbon emissions, totalling a whopping €13 trillion. They have paid back a mere 5% of this in corporate taxes, the study reveals, leaving a mountain of unpaid costs at the door of society. With fuel prices at record highs and consumers facing a cost of living crisis, now is the time for the oil companies to pay back, says T&E.

Sofie Defour, climate manager at T&E, said: “While oil majors’ shareholders and managers have pocketed nearly a trillion euros over the past 30 years, they have left destruction in their wake. And it is ordinary people who are paying for it. With fuel prices soaring, it’s time for Big Oil to pay back its debt to society”. 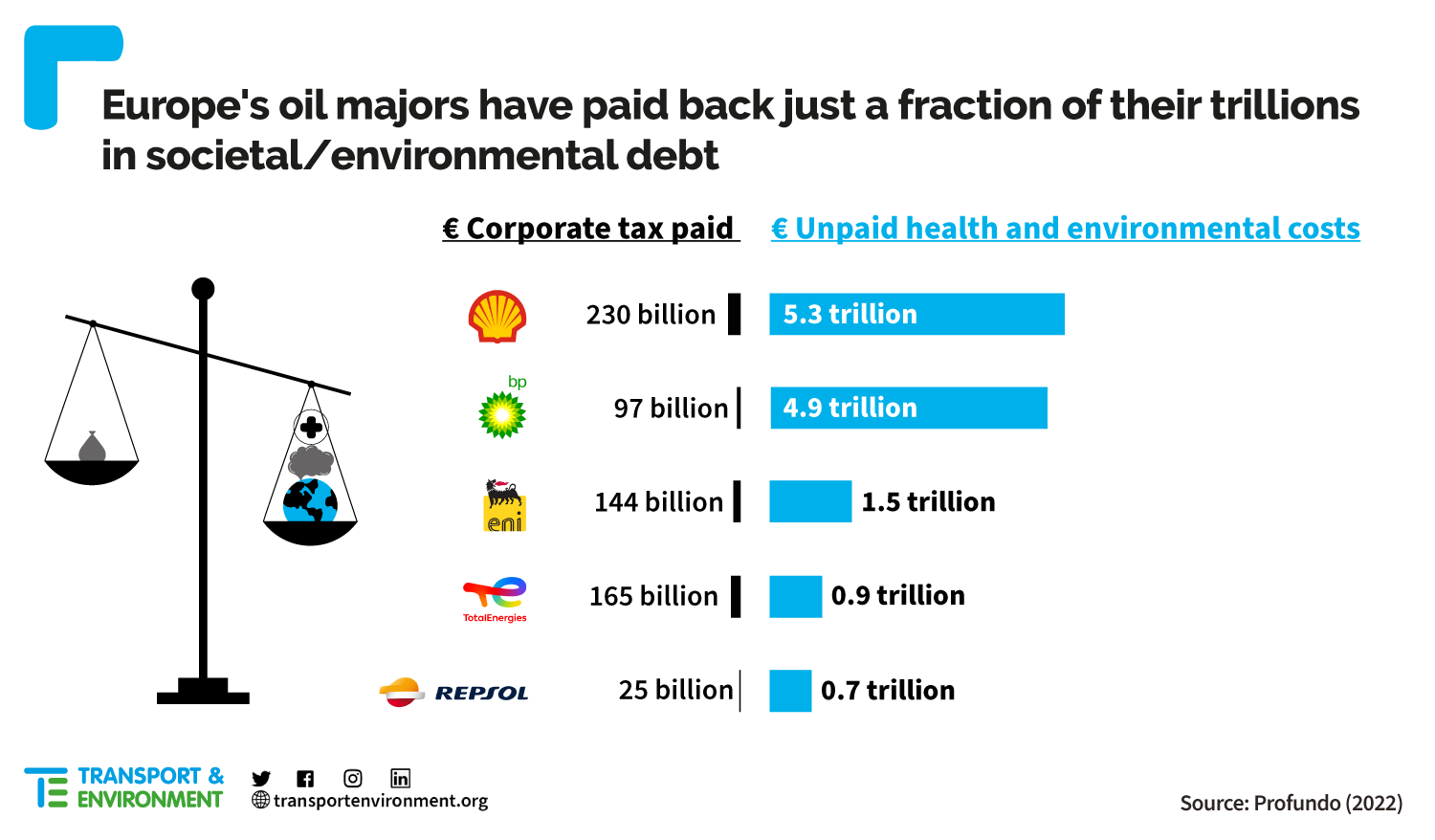 The Rio Summit in 1992 was the first time that countries agreed to act on sustainable development and by this time there was no doubt that oil companies were fully aware of their impact on the planet. T&E has therefore used the years since as a timeframe for Big Oil’s debt to society using a number of measures.

Shareholders and management were the major beneficiaries of this lack of societal responsibility. Between 1993 and 2020, €622 billion was distributed to the shareholders in the form of dividends and share buybacks. Managers of these five companies made over €2 billion in this timeframe. With soaring energy prices this year, shareholder and management profits will have grown significantly.

The oil majors have paid back a meagre 5% of the €13 trillion in societal damage through corporate taxes. In comparison, fuel taxes that are paid for by drivers at the pumps were in some cases over three times larger than the corporate tax paid by the five companies. Consumers have therefore been paying for external costs like health and pollution, while the oil majors have lined their pockets.

As Europeans face rising inflation – particularly at the pumps – Big Oil continues to profit. T&E calls on governments to help to alleviate the cost of living crisis and for oil companies to pay for the pollution they are responsible for.

For years Big Oil has sought to control the conversation on climate change legislation with Europe’s oil majors spending almost €4 billion worldwide in lobbying and an additional €3 billion in advertisements since 1993, the study shows.

Sofie Defour concludes: “This is not just about fairness. Big Oil is increasingly trying to dictate the pace of climate change mitigation. They seek to portray themselves as key actors in the transition by spending huge sums of money on lobbying and advertisements. Yet a legacy of unpaid oil debt shows that they are only interested in profits. Politicians must close their doors to Big Oil.”

[2] In various jurisdictions, carbon costs have been introduced. These costs form the start of a mechanism of pricing of externalities and to use the market price to reduce GHG emissions by companies and/or industries. Industries generate Scope 1 (operations), Scope 2 (sourcing) and Scope 3 (the use of the products sold) emissions. Fuel for cars, trucks, shipping, and all other road vehicles has to date not been included in the EU’s carbon tax. This means the majority of the oil majors’ emissions have not been included in the main carbon emission pricing mechanism. The study therefore estimates how much the companies should have paid in carbon taxes if all of their emissions were to be included in the EU’s carbon market.