The UK, Belgium and the Netherlands have also joined Germany’s call to set CO2 limits for new trucks.

Road traffic accounted for 95 per cent of the transport sector’s greenhouse gas emissions in Germany, according to UBA, while road freight traffic increased by about 31% between 2000 and 2013.

Trucks and buses accounted for around 30% of the world’s road transport CO2 in 2012. Due to growing traffic and improvements in passenger cars and vans by 2030 this will increase to almost 40%. According to the International Transport Forum, emissions by trucks and buses are on their way to become the biggest source of transport emissions globally.

Pressure has been building on the EU to act on lorry fuel efficiency standards since the US authorities announced new targets for CO2 reductions from its fleet. The US Environmental Protection Agency in June proposed a 24% improvement in truck fuel economy by 2027, on top of limits introduced in 2011.

Under the new US proposal, trucks there – which now average 33-36l/100km – will overtake Europe’s in the early 2020s and average less than 26.7l/100km by 2027, as shown in the graph (below). The EPA estimates this second phase of standards will save US truck owners €150 billion in fuel costs over the lifetime of the vehicles. 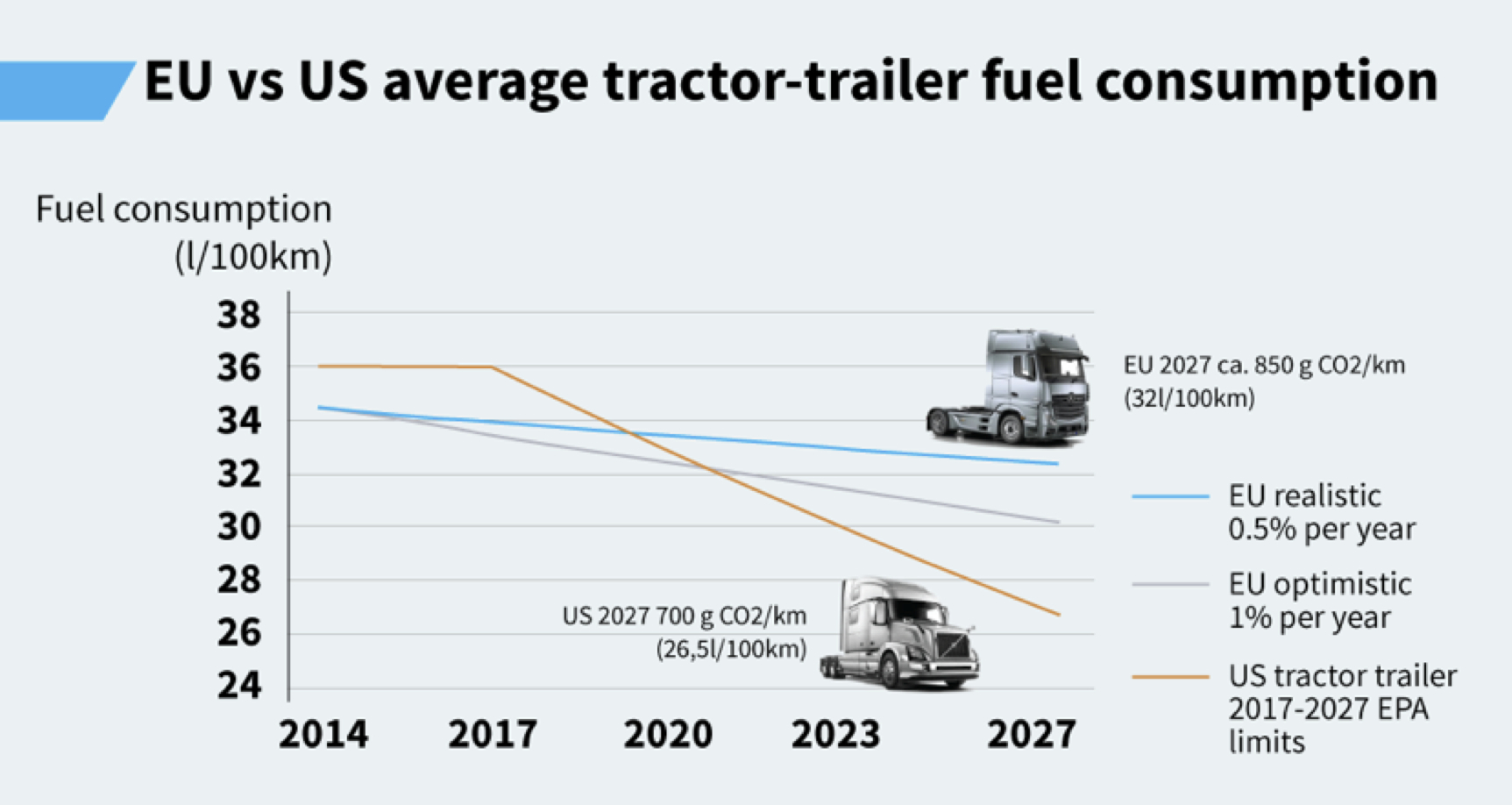 T&E said EU inaction threatened Europe’s technology leadership as the new US standard will bring forward the rollout of advanced technology in America, such as waste heat recovery systems being developed in Europe by Bosch, as well as better tires, more efficient transmission and hybrid engines.

William Todts, transport programme manager at T&E, said: ‘After 20 years of no progress on fuel economy and an Commission investigation on cartel behaviour, time’s up for Volvo and Daimler. They simply can’t be trusted to deliver the fuel efficient trucks we need. The US, China and Japan know this and are moving ahead with CO2 standards but Europe is paralysed. Climate commissioner Cañete should take note of the German environment agency, call for action and follow through.’

Access to Europe’s truck CO2 test procedure VECTO, which is being finalised by the European Commission, must be opened to truck users, transport industry and green groups have warned. If the software simulation too is to have a real impact on the market, truck users need to have access to it, according to the eight groups in a letter to Commission officials.

Access to VECTO would enable truck buyers to compare how their preferred vehicles and fuel saving technologies perform on their specific routes or journeys, increasing comparability, choice and competition. However, truck manufacturers vehemently oppose it, claiming such a move would disclose commercially sensitive information.

William Todts added: ‘Hauliers need to be informed and empowered to choose the most efficient trucks and inject competition into the market. Independent use of VECTO won’t solve all problems but will go some way to reducing truck fuel use.’

For hauliers, fuel amounts to up to a third of the cost of a running a lorry fleet.