In my time at T&E, I never expected to top a list with Vladimir Putin, nor did I want to. Yet that is what happened when Politico named the 28 power players behind Europe’s green agenda.

Putin was nominated because of his barbaric invasion of Ukraine and use of energy as a weapon has spooked Europe to its core. “President Vladimir Putin has achieved something generations of green campaigners could not — clean energy is now a fundamental matter of European security” wrote Politico.

T&E were nominated for very different reasons. “From vehicle fuel efficiency standards to work on clean planes and ships, T&E (…) now find themselves on the winning side of big arguments.”

I abhor Putin and everything he stands for.  And yet T&E and Vlad the killer have something in common. We exist because of oil. Oil is what enabled Putin’s rise, out of St Petersburg into the Kremlin. It is what funds his wars. We were never among the Putinversteher. As the below graph shows, T&E have been warning about Putin for many years.

Of course, oil is also Europe’s biggest climate problem, powering all of its transport system. T&E exists to change that. 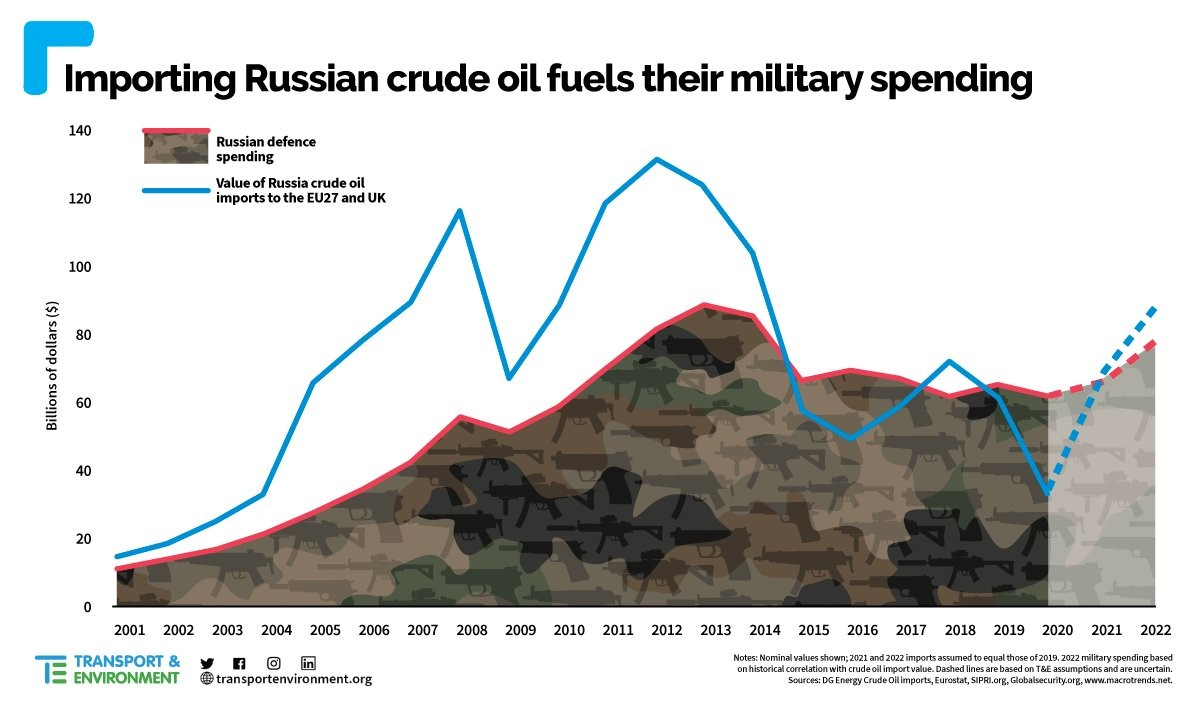 Just days after Russia’s president invaded, T&E called for an embargo on Russian oil (or rather an import tariff). It seemed unthinkable at the time, and yet on December 5th, it was enacted. Thanks to concerted US, EU and UK action, Russian oil now trades under a price cap.

But the structural knockout punch to Putin and his fellow petrodictators was a different one. Cars guzzle up most of Europe’s oil. In 2022 the EU decided to end oil guzzling car and van sales, and hopefully soon also trucks, ultimately this will kill demand for petroleum.

It’s hard to overstate the significance of the newly adopted CO2 standards. Ten years ago, the thought that Europe could regulate the combustion engine to extinction was unthinkable.  Back in the mid-2000s a top car lobbyist dismissed the very idea we’d one day regulate car CO2 emissions “we can never accept this, and if we won’t accept it, it won’t happen.”

Well it did happen, and most carmakers now accept the only future is a zero emission one.

It’s not just cars and vans that guzzle oil. Trucks, ships and planes account for the other half of EU oil demand.

In 2022 we saw decisive progress on each of those sectors. Shipping’s emissions are now in Europe’s cap and trade system, a global first, and aviation will be subjected to the world’s most advanced clean fuel mandate, and there’s hope something similar is achievable for shipping.

Nothing is won. Ironically 2022 was also the year the oil industry made record profits. A portion of that will surely be dedicated to keeping the world, including Europe hooked on oil. Some in Europe might say getting rid of Russian fossil fuels is good enough, especially once oil and gas prices fall back to prewar levels.

But unless we end our addiction to oil now, it may not be Putin’s but one of his colleagues topping the list of EU Green Deal influencers in 2025. Stand up Mohammed bin Salman.