Fuel tax cuts for drivers will cost European taxpayers almost €9 billion, new analysis finds. The richest motorists will receive eight times more public money than the poorest, on average, according to the study by green transport group Transport & Environment (T&E). It said governments should instead place an import tariff on Russian oil to raise revenue for cash support to low-income households and boost Europe’s energy security.

Griffin Carpenter, cars analyst at T&E, said: “EU governments claim they stand with Ukraine, but instead of taxing Russian oil, they’re subsidising it with €9 billion of taxpayers’ money. There are better ways governments can help people. We could impose a tariff or tax on Russian oil imports right now. Instead of subsidising the wealthy drivers of gas guzzling cars, cash support could be distributed more fairly to families who actually need it.”

The richest 10% of drivers will receive eight times more in fuel tax cuts than the poorest, on average, because they consume far more fuel, the report finds. Wealthier motorists drive more, often alone, and with larger, more polluting vehicles. For example, a 15 cent cut in fuel excise over six months will reduce a BMW X5 driver’s bill by €300 compared to €85 for a Citroën C3 driver. Meanwhile, people who take public transport receive nothing. 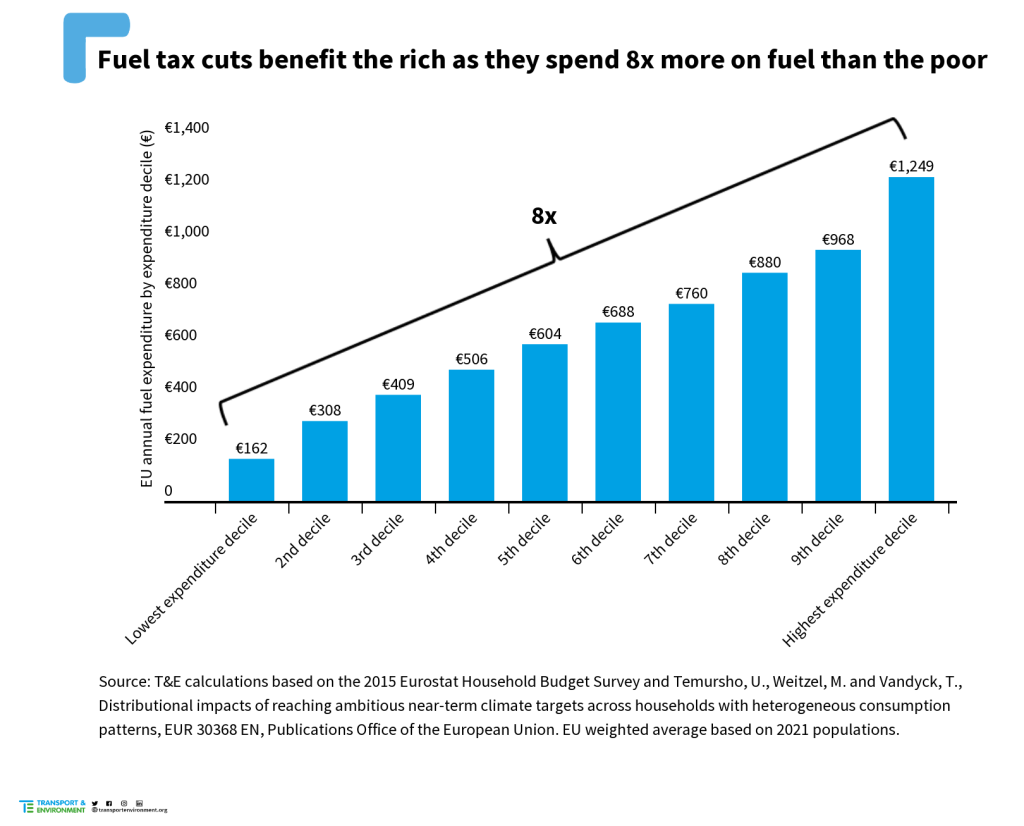 EU countries would raise €27 billion this year from an import tariff of $25 a barrel on Russian oil, the analysis also finds. Russia’s oil industry would have to absorb the cost as they have no alternatives to selling on the European market in the short term.

So far, no measures have been taken to reduce oil demand in Europe, with governments focusing solely on cutting fuel taxes, the study also finds. An IEA report published last week found that if all advanced economies take 10 emergency actions, they can quickly cut global oil demand by 2.7 million barrels a day, equivalent to the oil demand of all the cars in China.

Griffin Carpenter said: “The easiest way to avoid high oil prices is to make it possible for people to drive less. Governments should make homeworking a right and temporarily slash public transport fares. If governments want to help low-income households dependent on cars, they should lower income taxes, increase mobility allowances or simply issue cash cheques to those who need it.”