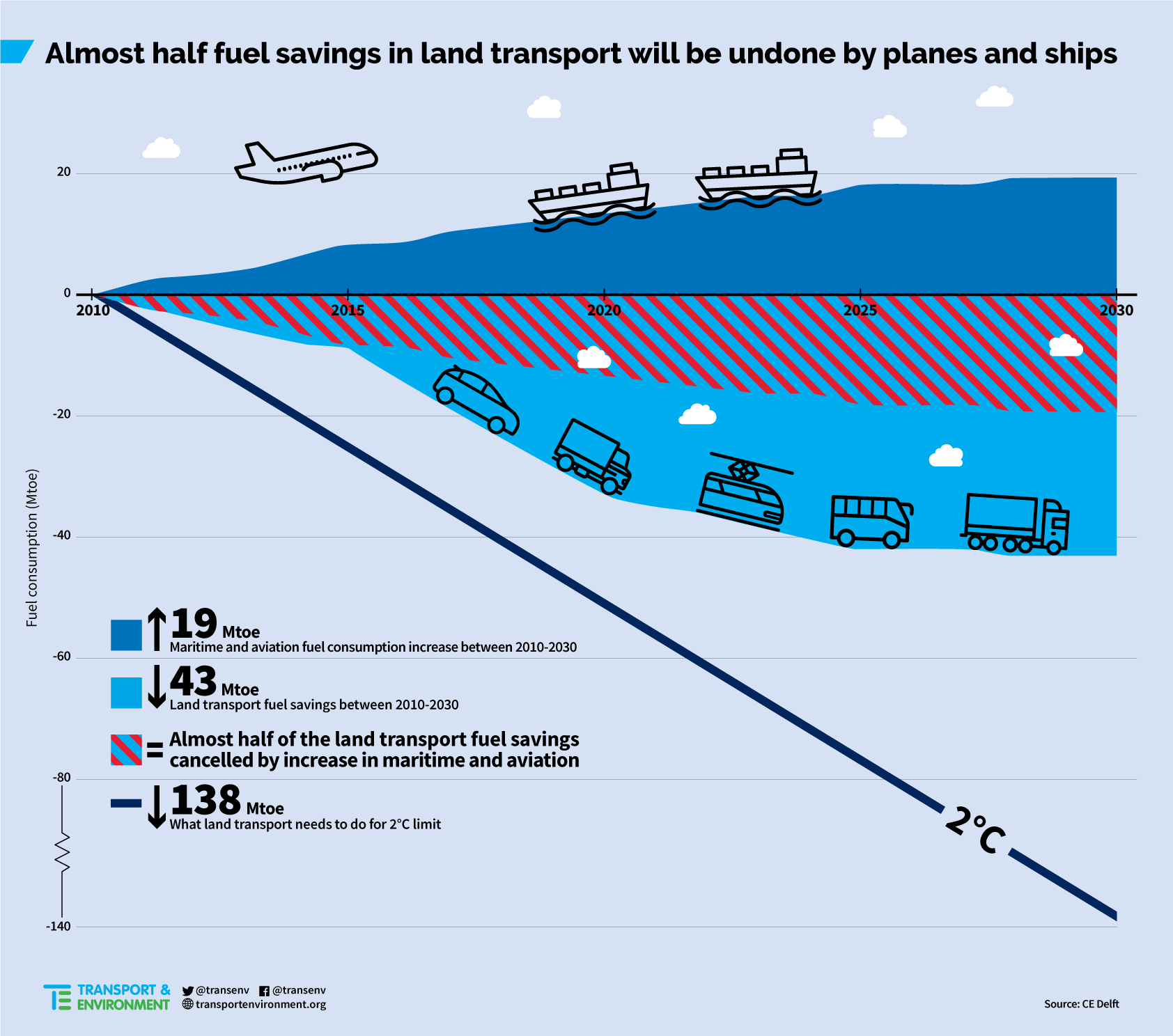 Under measures already in place, land transport is expected to consume 43 Mtoe (million tonnes of oil equivalent) less energy per year in 2030 than it did in 2010, according to consultant CE Delft.[1] Even this 43 Mtoe cut is less than half of what will be required from land transport under the EU’s proposed 2030 Effort Sharing Regulation.[2] Yet ships and planes in Europe will consume 19 Mtoe more fuel annually in 2030 than they did 20 years earlier. So the growth in these two sectors will undo almost half of the already insufficient progress made by cars, vans, trucks, rail and inland navigation.

Bill Hemmings, aviation and shipping director at T&E, said: “Planes and ships are free riding at the expense of land transport’s already insufficient efforts to cut emissions. This is not only unfair but a roadblock to Europe meeting its own climate commitments. Governments need to think again and include shipping in the emissions trading system and strengthen its aviation provisions.”

Shipping emissions are totally unregulated but next week the European Parliament will consider a proposal to fix this by creating a Maritime Climate Fund and including ship emissions in the EU’s emissions trading system (ETS). In January the European Commission will make a proposal on aviation’s future in the ETS.

Shipping CO2 emissions can be reduced cumulatively by 80 million tonnes by 2030 if the sector is included in the ETS, compared to the status quo where its emissions are not regulated, according to the European Commission. The difference between action and inaction up to 2030 amounts to the total annual emissions of Austria.[3] Currently MEPs in the environment committee are discussing whether to include the sector in the ETS through a Maritime Climate Fund. The fund would rebate a portion of ETS revenues back to the sector to finance sustainability projects. 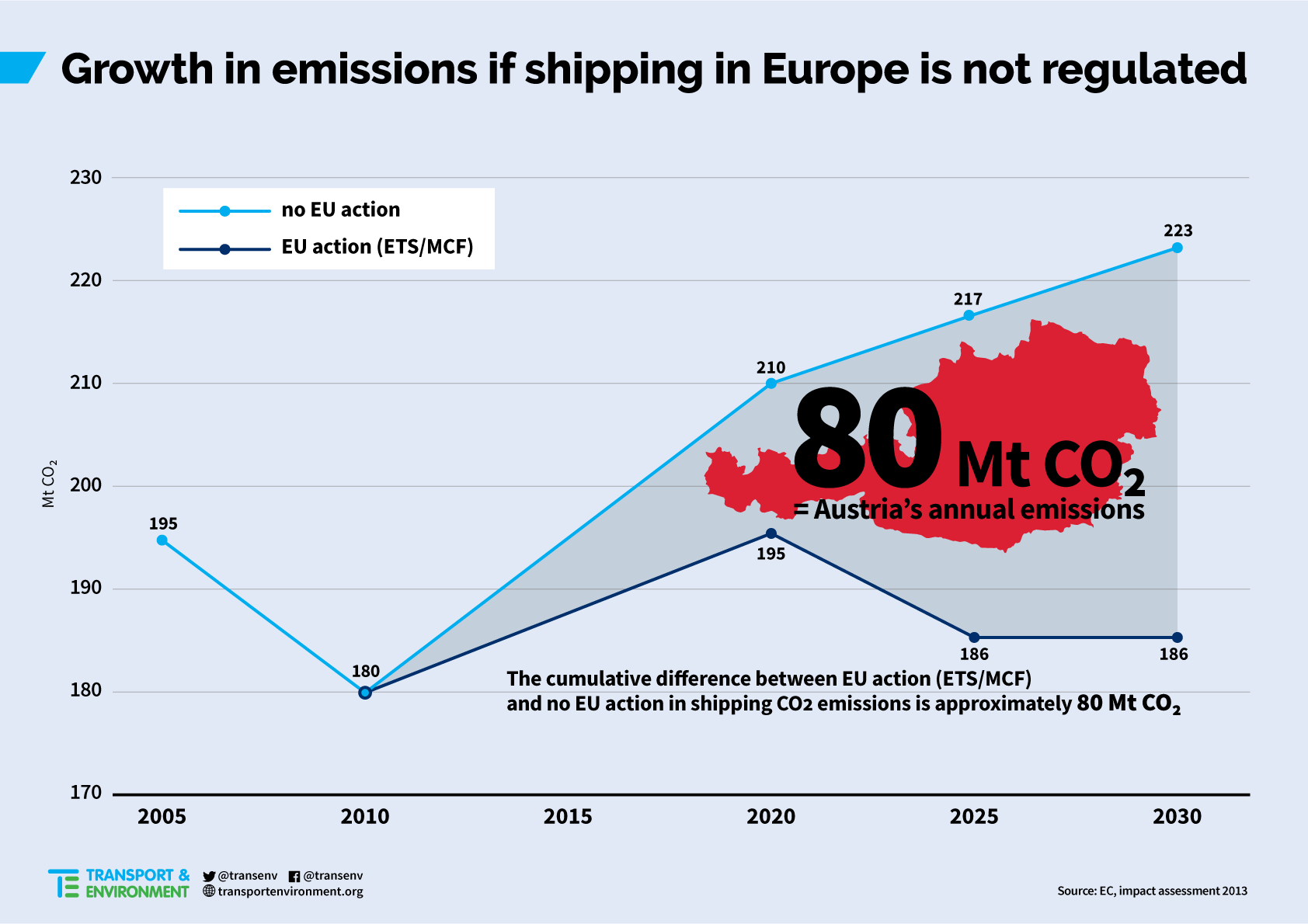 Shipping, one of the fastest growing sources of transport emissions, is projected to account for 17% of global emissions by 2050. Yet the International Maritime Organisation has decided to delay by at least seven years any agreement on introducing a global measure to reduce GHGs from the sector with the actual implementation date possibly many years further away.

Aviation is currently responsible for an estimated 5% of global warming. Aircraft CO2 alone is projected to quadruple and will potentially account for 22% of all CO2 emitted globally in 2050. A global agreement will see airlines in participating countries offset but not reduce CO2 emissions from aircraft, and on a voluntary basis.

[1] CE Delft’s based its calculations on the European Commission’s own projections for greenhouse gas emissions to 2050.

[2] The Effort Sharing Decision establishes binding annual greenhouse gas emission targets for EU member states. These targets concern emissions from most sectors not included in the ETS, such as land transport. The Effort Sharing requirements of land transport – cars, vans, trucks, trains and barges – are calculated based on a 30% reduction of their 2005 emissions levels.

[3] EC, 2013, Impact Assessment, Accompanying the Proposal for a Regulation of the European Parliament and of the Council on the monitoring, reporting and verification of carbon dioxide emissions from maritime transport and amending Regulation (EU) n° 525/2013