Over 25 million tonnes of CO2 – equivalent to the total CO2 emissions of Denmark¹ – are exempt from the EU’s proposed carbon price for shipping, a new Transport & Environment (T&E) study shows. Arbitrary exemptions of ships such as those servicing oil and gas facilities, as well as yachts, will undermine the EU’s shipping law and let millions of tonnes of emissions off the hook, says T&E.

In July 2021 the European Commission proposed a carbon pricing scheme (ETS) for shipping. It only applies to ships above a certain size (5,000 GT) and there are a number of exemptions for certain ship types.

Alongside exemptions for fishing and military vessels, ships such as those servicing offshore gas and oil vessels are also excluded, despite emitting more on average than bulk carriers and oil tankers. This means just over half of Europe’s ships are exempt from the proposal, despite them accounting for nearly 20% of the EU’s shipping emissions – double what the Commission originally claimed the exemption would cover².

Jacob Armstrong, sustainable shipping officer at T&E, said: “It’s good that the EU is finally trying to address shipping’s appalling climate impact. But its proposal based on arbitrary loopholes lets too many heavily polluting vessels off the hook. The EU must rethink its shipping laws to ensure that millions of tonnes of CO2 don’t go unregulated.” 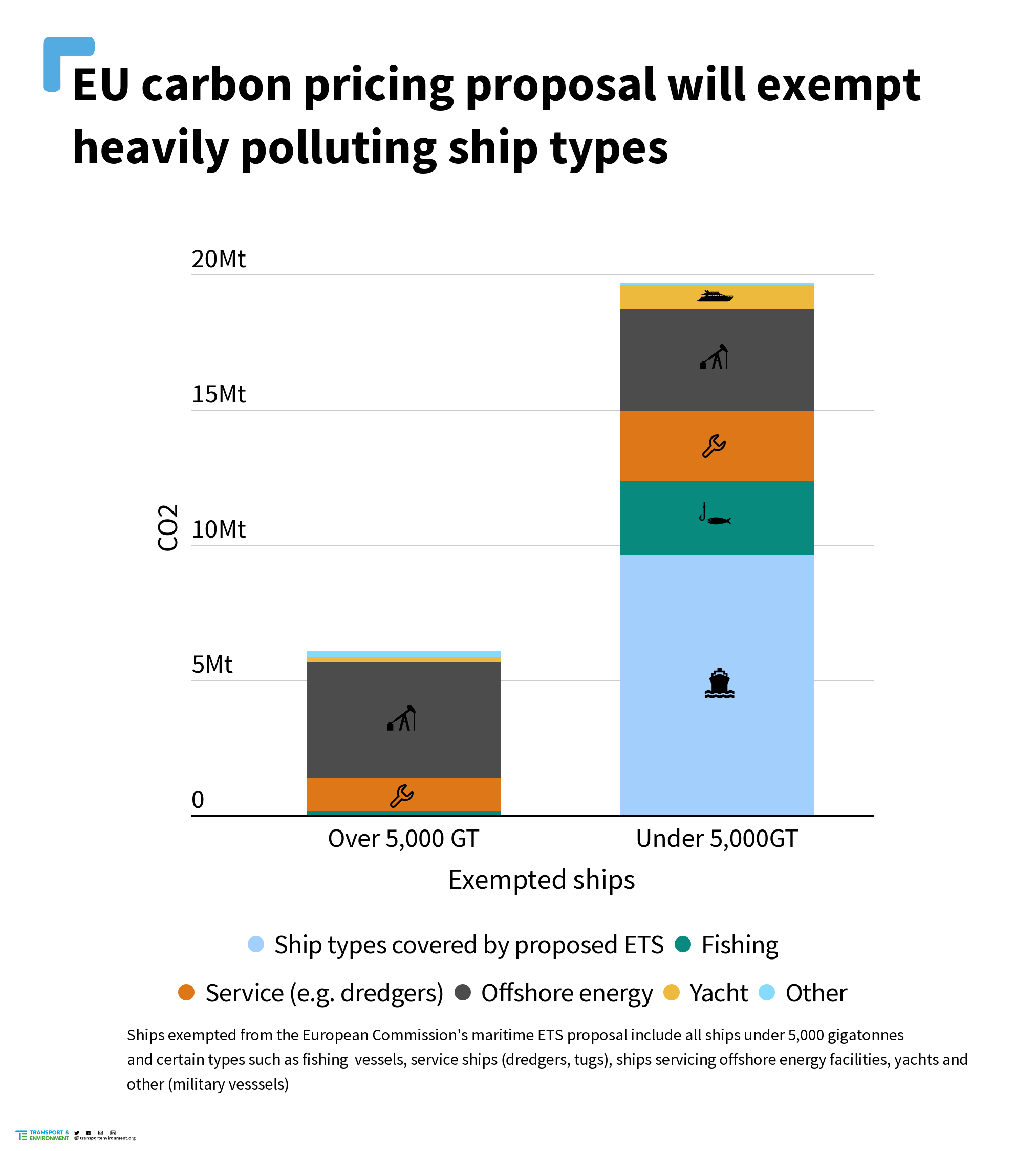 The Commission claims this would reduce the administrative burden by cutting down the number of ships that are covered, while still covering the vast majority of emissions. However, an approach that covers only ships that pollute over a certain amount – rather than based on size – would regulate more emissions without putting an administrative burden on small businesses, says T&E. T&E recommends a carbon threshold of 1,000 tonnes of CO2 per year, which would cover 12% more emissions than the current proposal[3].

The EU’s shipping industry emits nearly 130 millions tonnes of CO2 each year, making up roughly 4% of the bloc’s total emissions.

For another comparison, it is also equivalent to all of France’s aviation emissions.

² T&E understands that the Commission has calculated 90% of emissions coverage according to the 50% extra-EU scope, covering all voyages between EU ports and half of all voyages departing from and entering the EU. The Commission, however, does not make this explicit.