The vast majority of Europeans don’t know they’re putting palm oil in their tanks when filling up with diesel and are opposed to it. In a poll of 4,500 Europeans conducted in nine countries by Ipsos [1], 82% of citizens surveyed were not aware of the fact that diesel fuel has palm oil added to it. When asked whether they would support measures to end policy support and subsidies for palm oil in biodiesel in Europe, 69% of respondents said they would welcome the change, with only 14% against it and 16% with no opinion on the matter.

Italians and Hungarians express the strongest opposition to burning palm oil in cars and trucks (75%), followed by the French (71%), the British (69%) and the Poles (69%) . The survey shows there is strong public support across Europe for the European Parliament and Member States decision to phase out the use of palm oil in diesel fuel. The EU Commission has until 1 February 2019 to publish a delegated act establishing the science-based criteria to execute the progressive elimination of palm oil in diesel.

Palm oil expansion to feed cars in Europe drives deforestation and peatland drainage in Southeast Asia. Biodiesel made from palm oil is three times worse for the climate than fossil diesel. Last year, 51% of the palm oil used in Europe ended up in the tanks of cars and trucks. This makes drivers the top (albeit unaware) consumers of palm oil in Europe.

An international coalition of environmental NGOs in Belgium (Fédération Inter-Environnement Wallonie), Brussels (Transport & Environment), France (Amis de la Terre and Canopeé), Germany (Deutsche Umwelthilfe and Nabu), Italy (Legambiente), Portugal (Zero), Spain (Ecologistas en Acción), Sweden (the Swedish Society for Nature Conservation) and the Netherlands (Milieudefensie/Friends of the Earth Netherlands) – and more are expected to join – today launched a campaign to urge the Commission to execute the phase-out of palm oil in diesel in a delegated act by February 1, 2019.

The coalition has launched a citizens’ petition, supported by one of Europe’s leading platforms, SumOfUs. The campaign #NotInMyTank will entail a number of public initiatives and will culminate in a ‘European day of action’, with multiple demonstrations in Rome, Madrid, Berlin, Paris and at Berlaymont, home of the EU Commission. Activists have announced multiple ‘Gatherings of the Apes’ to convince policymakers to take action to avoid the extinction of many species, including orangutans, caused by deforestation. 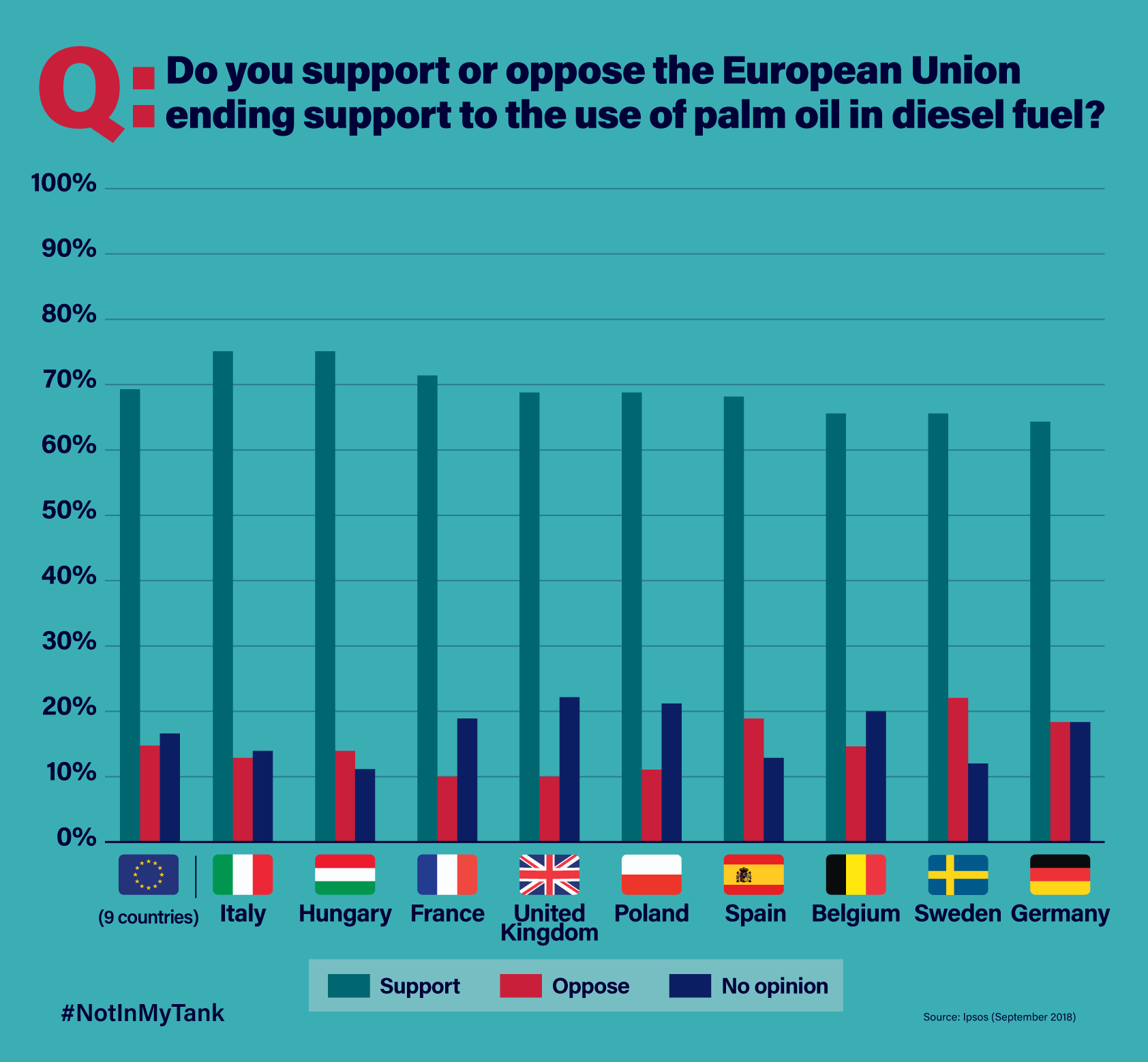 The EU’s Renewable Energy Directive was introduced to accelerate the uptake of renewables such as solar and wind but its transport chapter has promoted the use of food crops like palm oil, rapeseed oil and soy oil to make biofuels. Biodiesel made from virgin vegetable oil is the most popular and cheapest biofuel in the European market with a market share of three-quarters in 2017. Biofuels are counted as zero-emission energy for climate accounting purposes.

Rosalía Soley of Spain’s Ecologistas en Acción, said: “Burning palm oil in cars and trucks to meet climate goals is nonsense! And Spain is one of the worst countries in this respect.  According to the data of the National Commission of Markets and Competition, 90% of the biodiesel produced in our country is made with palm oil. Spanish production increased by 27% in 2017 and already accounts for 44% of all palm oil biodiesel produced in Europe. Commissioner Cañete can and should stop this madness.”

Sylvain Angerand, campaign coordinator of France’ s Les Amis de la Terre France and founder of Canopée, said: ”In France new big biorefineries are being built to make palm oil biodiesel like the one of Total in la Mède. Because of this project, the total consumption of palm oil in France could jump up to 60%. It’s high time for the EU to turn off the tap on palm oil.”

Giorgio Zampetti, Executive Director at Italy’s Legambiente, said: ”We wanted cleaner fuels to save the environment, instead we have palm oil, that destroys forests, feeding diesel cars: it’s an unbearable paradox. This campaign will voice the concerns of the majority of Italians and Europeans, who are against it. We need advanced biofuels, produced from waste, in the context of an economy that is  ‘circular’. And, in the long run, we need diesel-free cities such as Milan, that from 2025 will ban diesel vehicles altogether”.

Sascha Müller-Kraenner, director of Germany’s Deutsche Umwelthilfe, said: “Adding palm oil to biodiesel means that a precious product from rainforest regions is burned senselessly. Huge amounts of ‘certified’ palm oil are then no longer available to other markets such as the food sector. This madness must be stopped.”

Ton Sledsens of Milieudefensie’s forests campaign in The Netherlands, said: “Early on in the biofuels debate the Dutch government took a strong stance against high-ILUC biofuels that drive deforestation. So Milieudefensie expects the Dutch government to put pressure on the European Commission and its Vice President Timmermans to take decisive action against palm oil diesel.”

Karin Lexén, Secretary General of the Swedish Society for Nature Conservation, said: “In Sweden there’s a strong and positive commitment to end the use of fossil fuels. The European Commission and Cecilia Malmström must ensure that the shift from fossil to renewable fuels doesn’t lead to rainforest destruction with an even higher negative impact on the climate and biodiversity than the use of fossil fuels.”

Noé Lecocq of Belgium’s Inter-Environnement Wallonie, said: “Belgian people know palm oil production can be very destructive of the environment and the climate. But most of them just ignore that 63.000 cubic metres of palm oil has been blended in the diesel fuel sold in Belgian gas stations last year. Once people know, most agree this should come to an end.”

Trees Robijns at Germany’s NABU, said: “Diesel is not only polluting the air we breathe in our cities, it’s also blended with precious products such a palm oil, fuelling deforestation and destroying unique habitats for threatened species like the orangutan. This has to stop and we are calling upon the German government to change these harmful practice.”

Francisco Ferreira, President of ZERO, Portugal, said: “Since Portugal uses a limited amount of palm oil in the transport sector, the country therefore has an excellent opportunity to be at the front of a full ban of this unsustainable fuel.”

Fatah Sadaoui, Campaign Manager at SumOfUs, said: “People across Europe are outraged to find that there is palm oil in their tanks, which is why so many have been signing and sharing SumOfUs’ petition to expose the EU for their relationships with palm oil lobbyists. The palm oil industry has failed to live up to its sustainable palm oil promises. That means palm oil pumped into tanks across Europe is contributing to rainforest destruction and pushing orangutans to the brink of extinction. Together, we are galvanizing to demand change from the European Commission; anything less is unacceptable.”

William Todts, Executive Director of Brussels-based Transport & Environment, said: ”Putting palm oil in diesel, burning it and then calling it ‘green’ or ‘bio’ is wrong in so many ways. People don’t want it; the EU Parliament and EU ministers don’t want it; scientists says it’s counterproductive; basically nobody wants this. The only reason this is happening is the old European renewable energy law. The good news is that the new adopted law is designed to put an end to this. The Commission shouldn’t just see this as a legal obligation but also as a unique opportunity to show the EU is not out of touch with what a huge majority of Europeans want right ahead of the EU elections.” 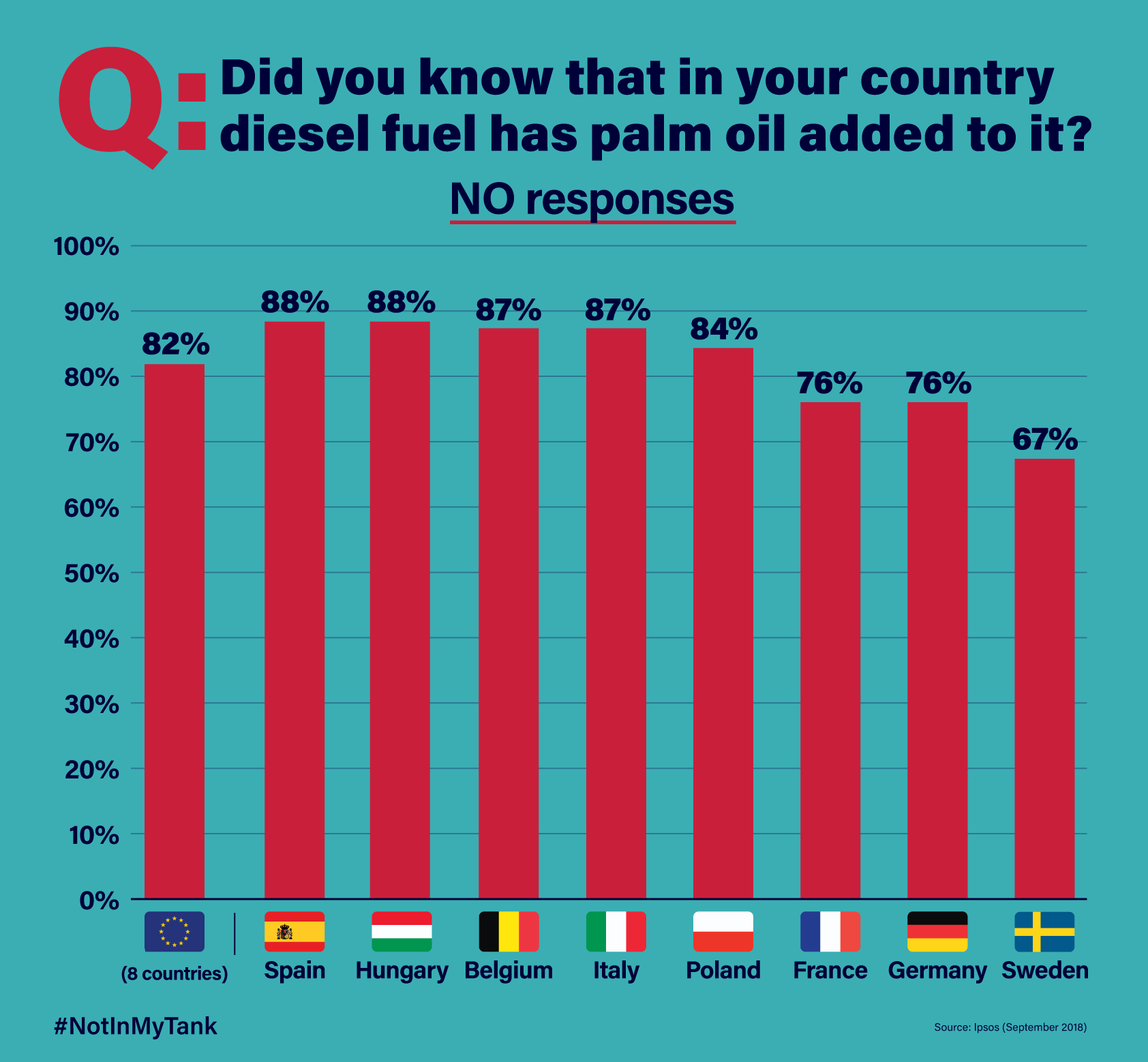