The recovery of the cars sector, and what technologies should be supported with public money, has already led to much debate in Berlin, Paris and Madrid, and ongoing in Rome. But the trucking sector is also badly hit by this pandemic. In the first five months, registration numbers fell by 37% compared to the year before. To kickstart demand, truckmakers are now calling for a scrappage scheme, whereby hauliers would get a financial bonus to scrap an old vehicle and replace it with a newer lorry complying with the Euro VI air pollution standard. The German government announced earlier this month in their – overall, very progressive – national recovery package a scrappage mechanism, paying truckers €10,000 to €15,000 for every truck scrapped and replaced with the newest Euro VI model. The money for the German scheme would not come from the national government but from Europe, which is where the European Recovery Fund comes in.

There are three reasons why introducing a Euro VI scrappage scheme supported with European money would be a mistake:

It is true that scrapping an old Euro III-V truck and replacing it with a new Euro VI vehicle would lead to reduced air pollutant emissions. But the effect of this policy would be limited as all new heavy-duty vehicles registered after 31 December 2013 need to comply with Euro VI anyway. It would only accelerate what would happen without a scrappage scheme while paying truckmakers to comply with existing regulation.

Secondly, giving money to replace an old truck with a newer fossil fuelled vehicle is not an example of sound long-term climate policy. On the contrary, in recent years, the fuel efficiency gains of new trucks have ranged from noneto very limited. This means that a sudden uptake of the newest Euro VI generation will not greatly bring down truck CO2 emissions and help Europe to meet the 2030 climate targets and become climate-neutral by 2050.

Finally it would not be a clever European industrial strategy. As of 2025, European truckmakers need to meet binding CO2 emission reduction targets, risking to pay high penalties if they fail to meet them. Martin Daum, head of Daimler Trucks, recently acknowledged that improving the efficiency of the diesel truck is not the long-term pathway for meeting these targets. The solution is to rapidly increase the production and sales of battery electric and hydrogen vehicles.

And that is exactly the challenge the trucking industry is facing now and where governments need to support them. So, rather than handing out money for a truck that is burning a few liters less, financial aid should be targeted to support the trucking sector in the transition away from diesel and gas. Truckmakers have already announced and started selling zero emission trucks; the challenge now is to accelerate this transformation. In other words, new investments should go to future-proof solutions.

How could this work in practice?

There are two ways – that are mutually reinforcing – to move from theory to practice. Firstly during the upcoming discussions in Council, EU Member States should amend the Recovery and Resilience Facility (RRF) Regulation, the biggest chunk of the €750 billion programme, to ensure that no financial support can be granted to fossil fueled vehicles and infrastructure.

Secondly, in the coming months, EU countries will submit their national RRF plans to get their share of this €750 billion. Instead of introducing scrappage schemes to support demand for new diesel trucks, national governments should set up financial support programmes to help truckmakers scale up manufacturing of zero-emission trucks and commit to reach 10% of sales production by 2025, similar to what Renault Trucks and Iveco have already announced. The infographic shows how much it would cost each country to support the production of electric trucks, assuming that 50% of the additional battery upfront cost would be paid by the state, the other half by the truckmaker. In total about €5 billion would be spent in the next five years in the EU. At the same time, countries and the EU should start investing heavily in the required infrastructure. 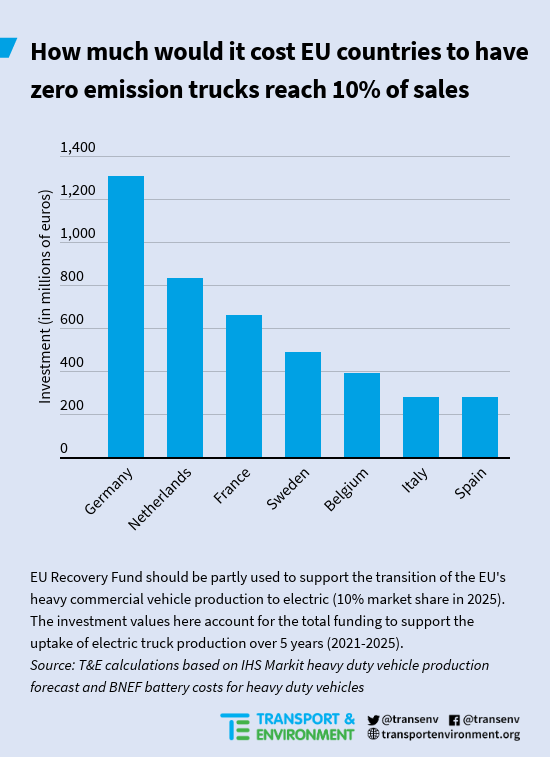 Today European carmakers are investing tens of billions of euros to catch up in the electric vehicle race as they had been caught napping while Californian and Chinese carmakers moved ahead and are currently leading and possess valuable knowhow. A recent call from major logistics companies for the European Commission to help accelerate the supply of zero emission trucks shows that there is demand for clean trucks, but also a growing frustration. The recovery package is the opportunity to help European truckmakers as well as the logistics sector. Squandering money on Euro VI trucks will only push truckmakers, the logistics sector and Europe further away from their own targets, and at the same time open the door for non-European competitors to conquer the market. Now, which of those options sounds like a “recovery”?