By 2035, buying and running a new long-haul diesel truck with pure e-diesel would cost 47% more than buying and operating a battery-electric truck (BET)[1]. This is because the lower energy and maintenance costs of a battery-electric truck quickly offset its higher purchasing costs. Meanwhile, vehicles running on e-fuels would be significantly more expensive due to the high cost of a liter of e-fuel.

The study compares the price of e-fuels in various scenarios, and even in the most optimistic scenario, e-fuels are still 15% more expensive than battery-electric trucks. This scenario envisages using e-fuels in a second-hand truck, and comparing a BET with high battery and recharging costs.

Max Mollière, e-mobility data analyst at T&E, said: “Cost is a huge consideration for road freight companies, which is why battery-electric trucks are the way forward. E-fuels are a desperate attempt by the fuels industry to throw themselves a lifeline at the expense of hauliers operating on thin margins. Why force expensive e-fuels upon them when there is a cleaner and cheaper solution at their fingertips? Europe recently announced it will not use e-fuels in cars for good reason, so let’s put trucks on the same path.” 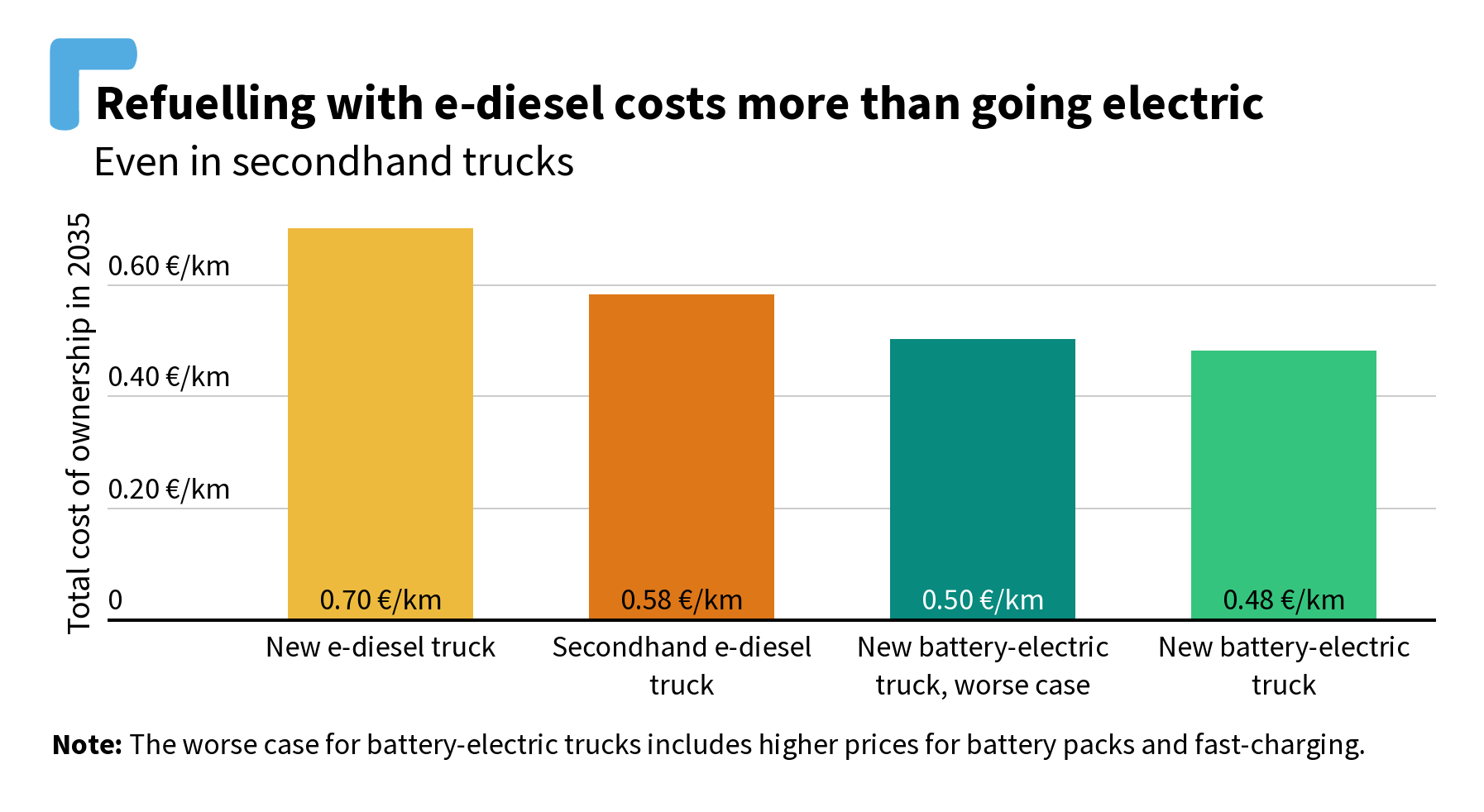 In a typical case[2], a truck powered by e-diesel would emit close to three times more GHG emissions over its lifetime than a BET charged with average grid electricity. In a best-case scenario where 100% renewable energy is used for e-fuel production and BET charging, an e-diesel truck still emits 41% more than a BET. In spite of the higher manufacturing emissions due to battery production, e-fuel trucks emit much higher GHG emissions over their lifetime than BETs. This is because most of the GHG emissions are caused during the driving phase, and trucks have high mileage. 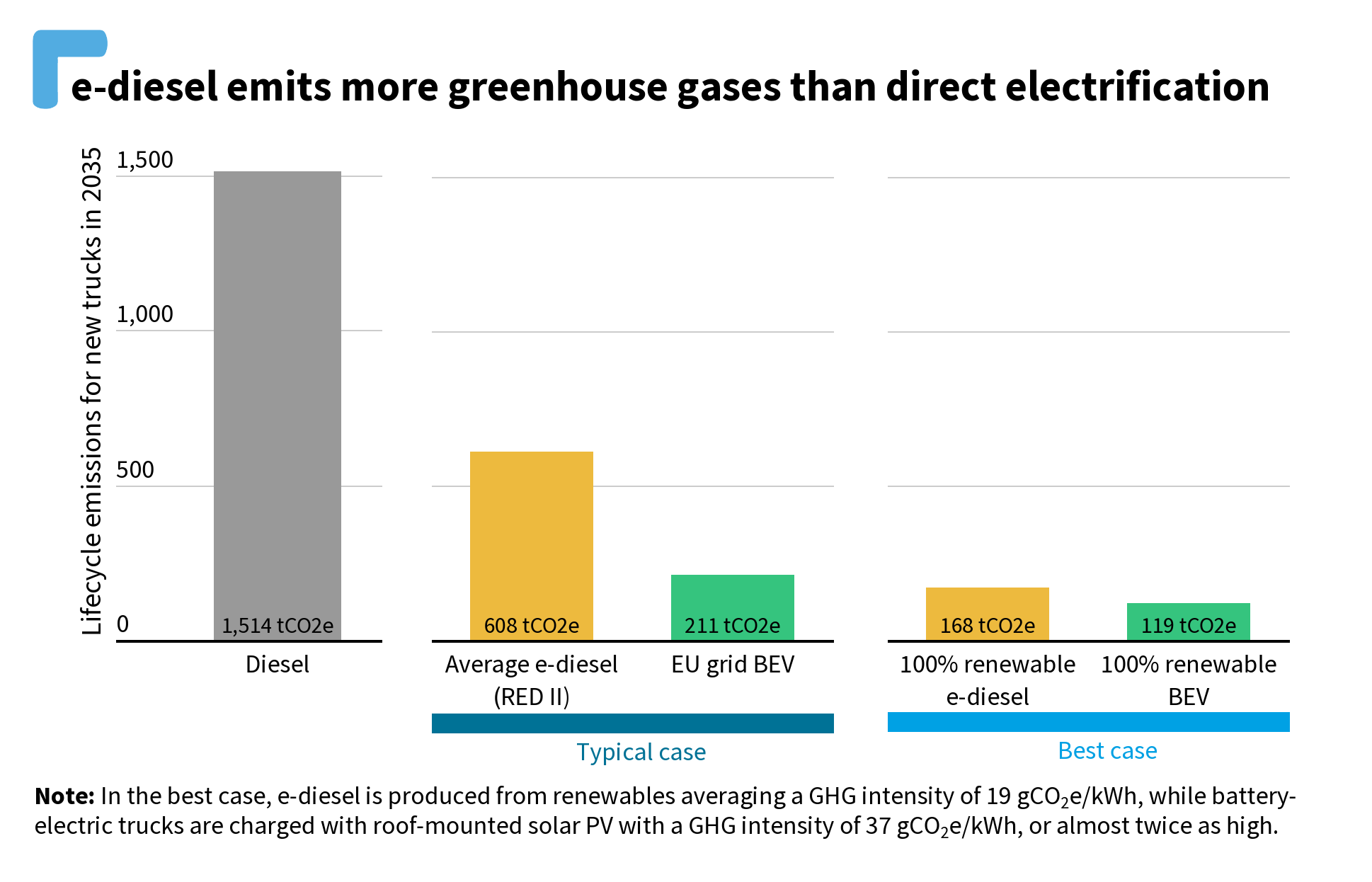 Concawe, the oil industry’s research group, modelled that European production of e-fuels for road transport would reach 6 Mtoe in 2035. This would meet only 6% of trucks’ fuel demand in 2035. Current projections for imports of transport e-fuels only foresee imports of e-kerosene and e-ammonia, which would not apply for road transport. There are no public projections for import volumes of e-diesel or e-petrol from abroad into Europe, meaning the supply of e-fuels for trucks and cars would be very limited[3].

If those 6 Mtoe of e-fuels are to be used in trucks, the amount left for aviation and shipping would be insufficient for the decarbonisation of these two sectors, where other technologies such as electric and hydrogen ships and planes are not feasible nor scalable, says T&E.

“After its attempt with cars, the fossil fuel industry is hoping to resurrect e-fuels in trucks. The claim that this technology is a scalable solution to decarbonise is wrong for cars and new evidence shows it’s also wrong here. They will jeopardise the transition to electric trucks and lock-in diesel technologies for much longer than our planet can sustain,” concluded Max Mollière.

The European Commission is set to revise the CO2 standards for trucks at the end of 2022. Ahead of the proposal, T&E calls for:

[1] BETs are less susceptible to energy price fluctuations than conventional trucks because of their higher efficiency. E-fuels, on the other hand, are much more impacted by high electricity prices because of the large amount of electricity needed to produce them.

[2] The typical case assumes that e-diesel production does not go beyond the 70% GHG reduction necessary to comply with the Renewable Energy Directive (RED II).

[3] In a recent report, the Hydrogen Council projected that by 2050 the only fuels derived from hydrogen imported in Europe will be synthetic kerosene and ammonia. https://hydrogencouncil.com/wp-content/uploads/2022/10/Global-Hydrogen-Flows.pdf