The report, Private jets: can the super-rich supercharge zero emission aviation?, reveals the climate impact of private jets across Europe. It finds that private jets are 10 times more carbon intensive than airliners on average, and 50 times more polluting than trains.[1]

According to the findings, a four-hour private flight emits as much as the average person does in a year. T&E points out however, that private jet owners, who have an average wealth of €1.3 billion,[2] can be part of the solution – by paying for the development of greener technology that can help accelerate innovation and clean flying for everyone.

The study highlights the continued use of private jets last year despite the pandemic. By August 2020, while most Europeans were still grounded and commercial flights were down 60% year-on-year, private jet traffic had returned to pre-COVID levels. One operator reported an 11.3% increase in private flight sales in July 2020 alone.[3]

Andrew Murphy, Aviation Director at T&E, said: “Flying on a private jet is probably the worst thing you can do for the environment. And yet, super-rich super polluters are flying around like there’s no climate crisis. The upside is that the private jet market is ideally suited to help bring about aviation’s Tesla moment, making hydrogen and electric planes a reality.” 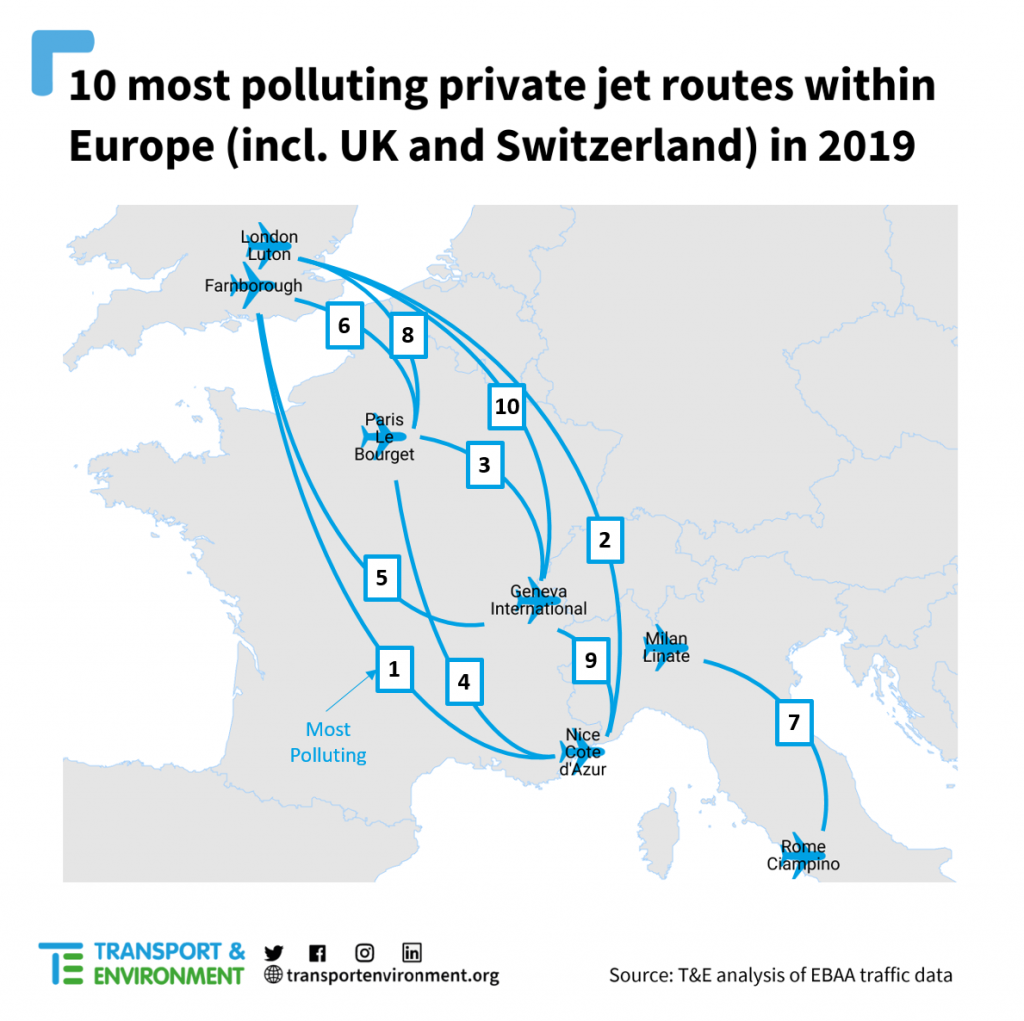 Despite the disproportionate climate impact, private jets are untaxed in most European nations because of exemptions from the EU’s carbon pricing scheme (EU ETS) and untaxed kerosene.

T&E calculates that a jet fuel tax applied proportionately to flight distances could raise €325 million if applied to all flights departing from the EU and UK. The report suggests that revenues raised in this way could be used to accelerate the decarbonisation of the aviation sector.

Andrew Murphy explained: “The good news is these short hops are prime targets for replacement by clean technologies like electric and hydrogen aircraft. European policymakers need to urgently start taxing fossil-fuel powered private jets and ban their use by 2030. The revenues raised from the super-rich could be invested in greener technology that could clean up flying for everyone.”

While the aviation sector is preparing to re-open post-European lockdowns, its environmental impact is under increasing scrutiny. France has recently banned some short-haul internal flights and the UK is developing its own aviation emissions framework, as well as speeding up its target to cut emissions ahead of hosting the G7 Summit in June 2021.

The report makes three recommendations to advance the decarbonisation of the sector and mitigate the disproportionate climate impact that private jet use has:

[4] T&E calls on regulators to only permit the use of hydrogen or electric aircraft powered with green hydrogen and electricity for private jet flights under 1,000km within Europe by 2030. Large private jet companies should be obligated to enter into power purchase agreements (PPA) with e-kerosene suppliers for all flights.