The study comes as MEPs this week vote on proposals to reform the EU ETS. The proposals include a progressive decrease of both the cap on aircraft emissions and of free allowances available to airlines, thus bringing aviation into line with obligations on other industries. 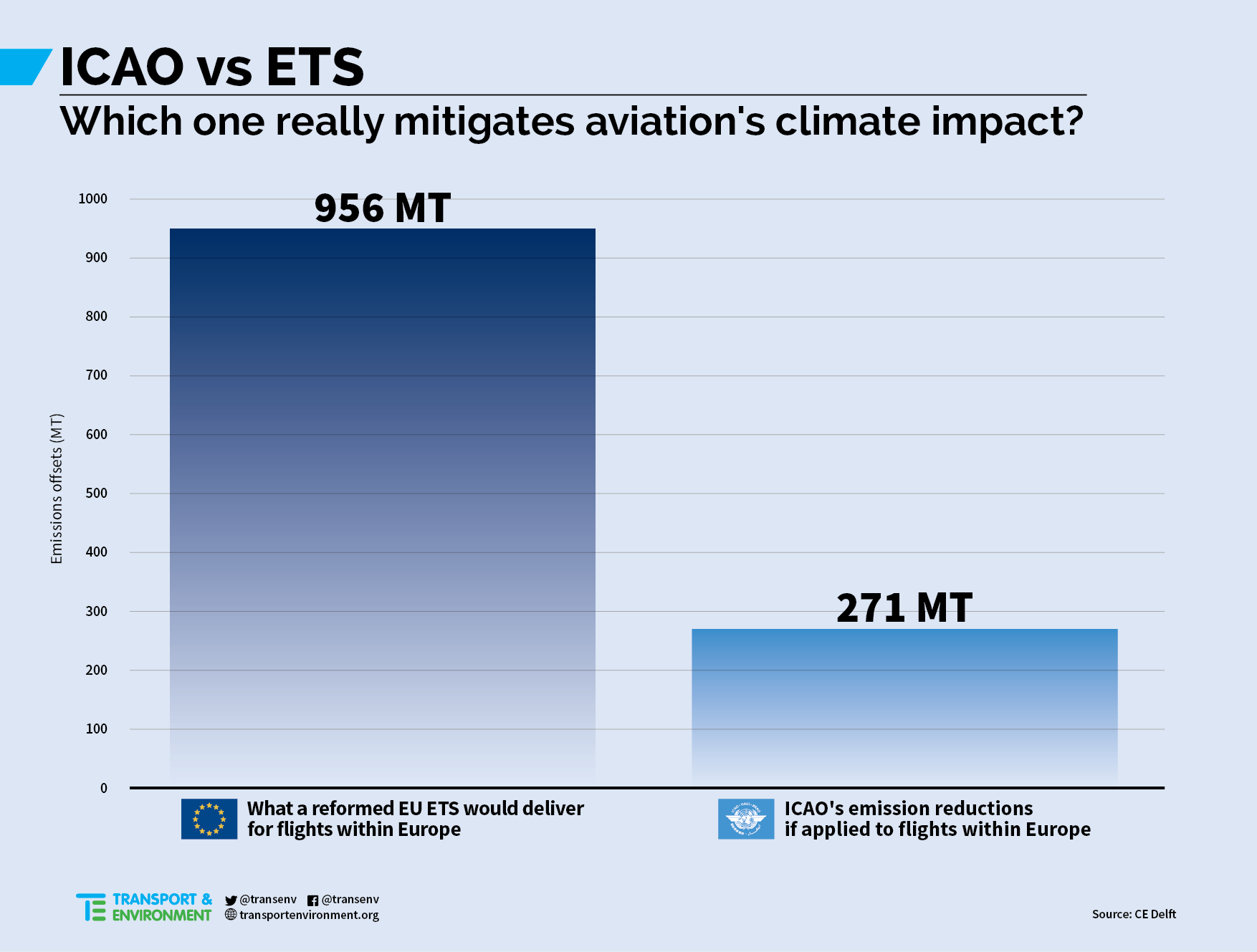 Reforming the aviation ETS in this way and still only covering flights within Europe will mitigate 956Mt of CO2 while ICAO’s scheme, applied to those same intra-EU flights only, would mitigate a maximum of just 271 Mt over its 2021-2035 lifetime, consultant CE Delft found. [1] Even when applied to flights “globally”, the ICAO scheme will only mitigate a maximum of 2,711 Mt – less than what the original full-scope aviation ETS would have delivered and much less if the cap was decreased annually from 2021 in line with other sectors.

Andrew Murphy, aviation policy officer at T&E, said: “We now know why industry wants the ICAO deal and not the ETS. A reformed ETS is much more effective than the cheap offsets that the ICAO deal will rely on.” 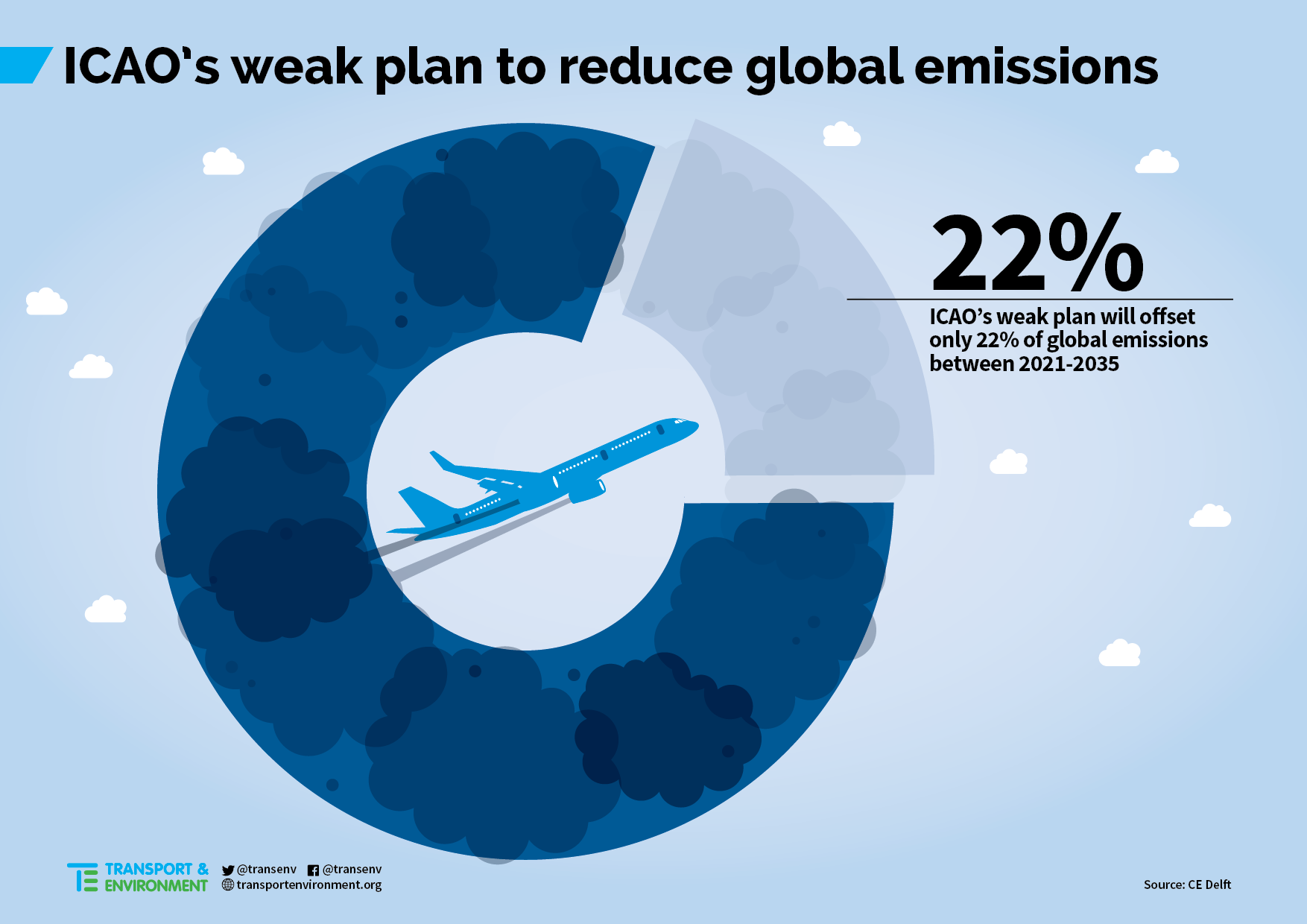 The CE Delft report also finds that ICAO’s scheme will offset only a maximum of about one-fifth (22%) of emissions over the 2021-2035 period because it just addresses emissions growth above 2020 levels and then only some 80% of that target due to countries not participating. The ETS cap is much stricter. The climate effectiveness of ICAO’s scheme also depends heavily on the application of strict rules governing the quality and type of offsets which will be permitted. Without strong political will, it’s possible that airlines will be able to purchase cheap offsets which in fact deliver no real-world emission reductions. The agreement adopted by ICAO as yet contains no such rules.

Andrew Murphy concluded: “This report shows that good regional action delivers more than weak global action. Cutting the cap in the ETS, as Parliament will be voting on, is the way to go. An ICAO-only approach, which has been the mantra of some in Europe for too long, won’t do the job. ICAO is only the bare minimum and Europe needs to build on it.”

Europe launched its ETS in 2005 and included emissions from all flights within, to and from Europe from 2012. This step was taken after ICAO repeatedly failed to act, but faced immediate resistance from industry and other states who claimed a global approach was better for such an intense and rapidly growing driver of climate change. Under this pressure, the EU relented and agreed to suspend flights to and from Europe from its ETS, leaving only flights within Europe (intra-EU) in the system.

Aviation‘s CO2 and non-CO2 make it responsible for an estimated 5% of global warming. Without a change in the current projections, emissions will increase by more than four times, potentially to account for 22% of global emissions in 2050. Aviation CO2 has grown from 1.4% to 4.5% of Europe’s emissions between 1990 and 2014, due largely to Europe’s indifference to the sector’s climate impact.

[1] The study based a reformed ETS on a linear reduction factor, by which the cap on the total number of ETS allowances is reduced, of 2.2% each year from 2021. This is widely expected once the current reform process is finalised by lawmakers.