The BMW X5, Volvo XC60 and Mitsubishi Outlander emitted 28-89% more CO2 than advertised when tested by Emissions Analytics on a fully charged battery in optimal conditions. On an empty battery, they emitted three to eight times more than official values. When driven in battery-charging mode, which could become more common as motorists charge up ahead of using electric mode in low-emissions zones, the PHEVs emitted three to 12 times more. 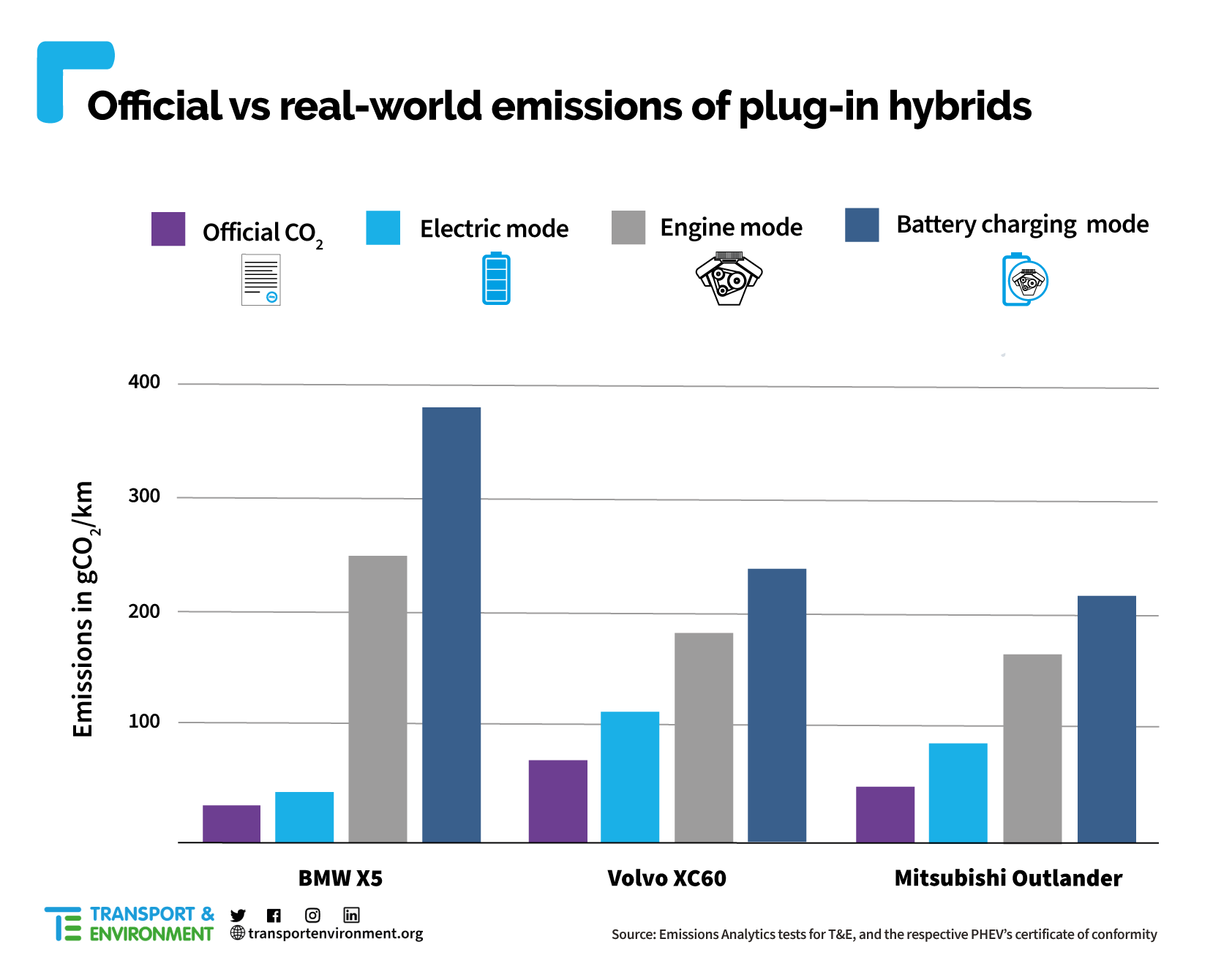 Julia Poliscanova, senior director for clean vehicles at T&E, said: “Plug-in hybrids are fake electric cars, built for lab tests and tax breaks, not real driving. Our tests show that even in optimal conditions, with a full battery, the cars pollute more than advertised. Unless you drive them softly, carbon emissions can go off the charts. Governments should stop subsidising these cars with billions in taxpayers’ money.”

Once the battery is flat, the three plug-in hybrids can only drive 11-23km in engine mode before they overshoot their official CO2 emissions per km, T&E estimates. This is contrary to the misleading carmaker narrative that PHEVs on sale today are suited for long journeys. In fact, they have to be charged much more frequently than battery electric cars, which do around 300km on a single charge.

While carmakers blame customers for using the engine too much, the PHEV models on sale today often lack the necessary EV power, range or charging speed. For example, two of the three cars tested, the BMW X5 and Volvo XC60, cannot fast charge. And even the Outlander’s manual states that the engine may start if the PHEV system is too hot or too cold, if quick acceleration is applied, or if the air conditioning is operating.

Julia Poliscanova concluded: “Carmakers blame drivers for plug-in hybrids’ high emissions. But the truth is that most PHEVs are just not well made. They have weak electric motors, big, polluting engines, and usually can’t fast charge. The only way plug-ins are going to have a future is if we completely overhaul how we reward them in EU car CO2 tests and regulations. Otherwise PHEVs will soon join diesel in the dustbin of history.”

Selling plug-in hybrids makes it easier for carmakers to meet their EU car CO2 standards as PHEVs are currently given additional credits. T&E said the EU should end this weakening of the regulation when it reviews the targets for 2025 and 2030 next year.

[1] The ICCT analysed databases up to 2019 and found the real-world CO2 emissions from plug-in hybrids were typically two-to-four times the measurements given in their approval process.

A T&E analysis of European studies of CO2 emissions from PHEVs while driven on the road by owners in 2016-2018 showed emissions were, on average, over two-and-a-half times those of official test values.

Plug-in hybrids: Is Europe heading for a new Dieselgate?