The poll for Transport & Environment (T&E) reveals that 68% of respondents who expressed an opinion want their country’s climate targets to be increased, while 84% support increased climate efforts in the transport and buildings sectors to be delivered through new standards and regulations [i].

T&E is calling on the European Commission to listen to citizens and stop casting doubt on the continued responsibility of national governments to jointly deliver on the EU’s 2030 climate target. The Commission should propose increased national targets as part of the June ‘Fit for 55’ package.

Sofie Defour, climate manager at T&E, said: “Binding targets are a key driver for national climate action like ending subsidies for diesel company cars and are widely supported by EU citizens. The European Commission should take heed of this and finally make clear that the national targets are here to stay as one of the main pillars of the EU’s climate architecture.”

There is also overwhelming support among EU citizens (84% of respondents who had an opinion) to implement new measures to reduce greenhouse gas emissions, such as road transport zoning and minimum sales of electric vehicles, at a combined national and EU-level. Respondents are more reserved when it comes to a new EU-level pricing instrument that would make transport and heating fuels more expensive for consumers, such as the proposed extension of the EU’s carbon market to these fuels would do [ii]. While 41% of respondents who had an opinion support such an instrument, 59% oppose it. 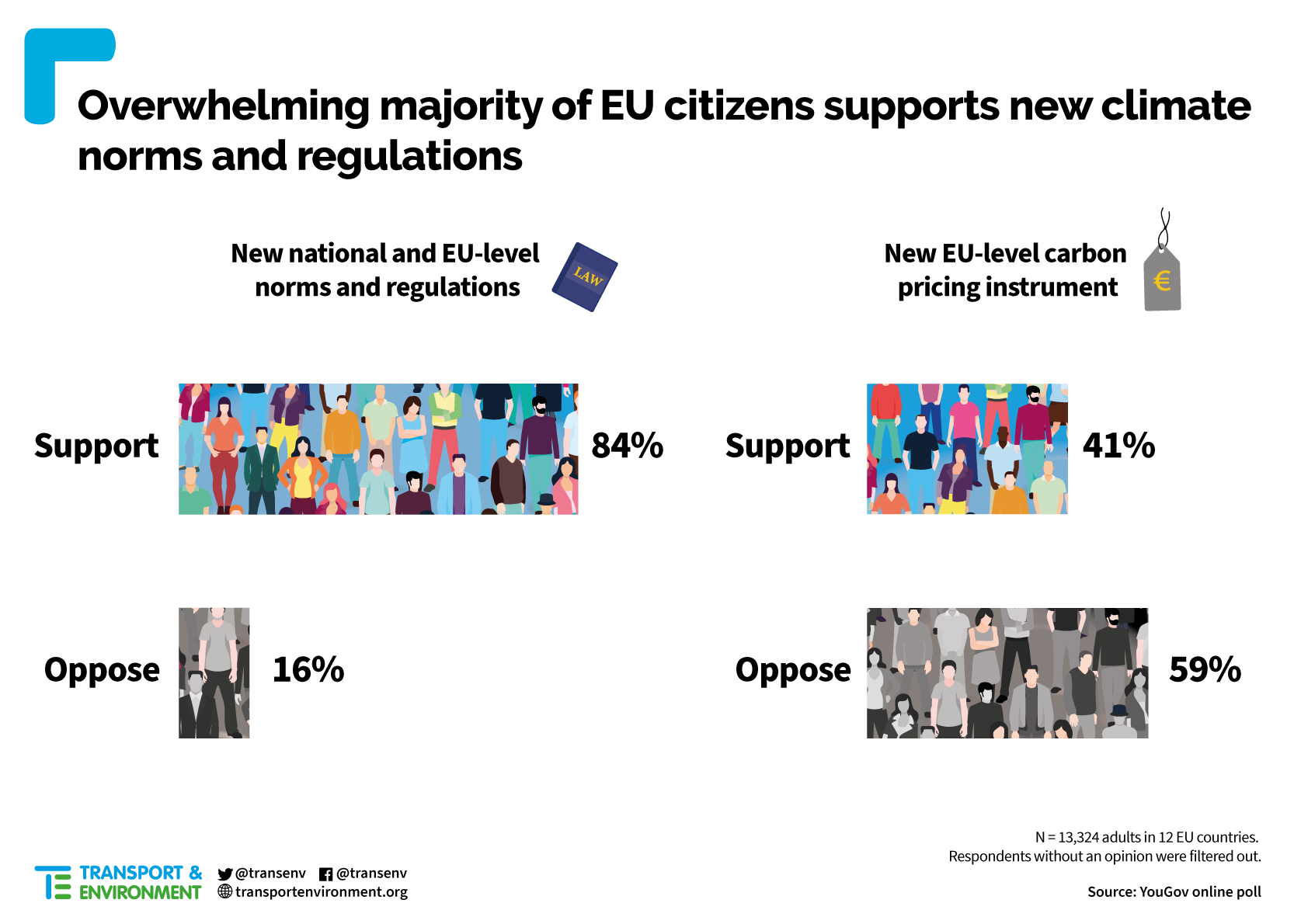 The EU is currently debating the continued existence of the so-called Effort Sharing Regulation, which sets binding national climate targets for each member state and regulates 60% of EU emissions.

Sofie Defour, climate manager at T&E, said: “Shifting the responsibility for delivering on the EU climate target from countries to the EU’s carbon market, is a high risk, low reward strategy. If the EU does decide to press ahead with a carbon market for cars and trucks despite low public support, it should address the social impacts both within and between EU Member States.”

The European Commission should build on the overwhelming public support for new climate measures to prioritise increased ambition in high-impact EU measures such as CO2 standards for cars and vans. Ambitious policies at EU-level also help member states to more easily reach their targets.

All figures, unless otherwise stated, are from YouGov Plc. Total sample size was 13324 adults. The online survey was undertaken between 11th – 20th February 2021 in 12 countries including Romania, Netherlands, Italy, Portugal, Denmark, Poland, France, Germany, Ireland, Belgium, Hungary and Spain. The figures have been given a weighting reflecting the size of the population of each country aged 18+ to be representative of this country group as a whole. All calculations to filter out the respondents without an opinion were done by Transport & Environment.

[i] Question is asking extent of the support for the following statement: ‘In order to reduce emissions and achieve the new climate targets, national governments will implement new measures to reduce greenhouse gas emissions (e.g. including road transport zoning, buildings renovations etc), in combination with other EU measures (e.g. minimum sales of electric vehicles etc), which will not make fuels more expensive for consumer.’

[ii] Question is asking extent of the support for the following statement where the instrument was introduced: ‘In order to reduce emissions and achieve the new climate targets, the European Commission will create a new instrument. Such instrument would make transport fuels (i.e. diesel and petrol) and heating fuels (i.e. natural gas and fuel oil) more expensive for consumers.’