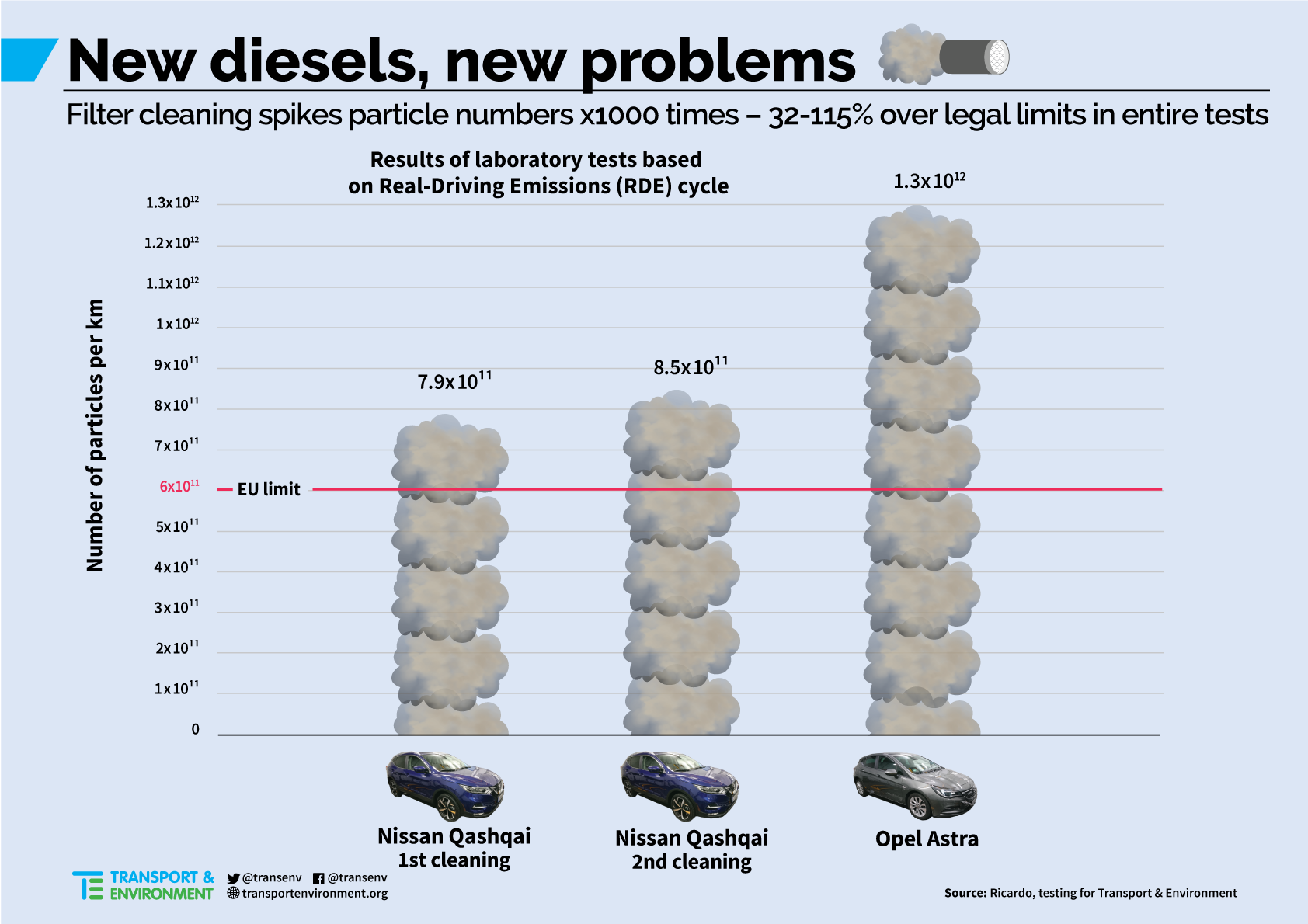 The Nissan Qashqai and Opel Astra, the second and fourth bestsellers in their segments respectively, were 32% to 115% over the legal limit for particles when they cleaned their filters in the independent tests. But a loophole means that the legal limit does not apply when filter cleaning occurs in official testing, meaning that 60-99% of regulated particle emissions from the tested vehicles are ignored.

Anna Krajinska, emissions engineer at T&E, said: “These tests show that new diesels are still not clean. In fact they are spewing out highly-dangerous levels of particles in our towns and highways everyday. Carmakers are being given an easy ride but people’s lungs are paying for it. Manufacturers should clean up their cars if they want to sell them.”

Harmful total particulate emissions from the Nissan Qashqai and Opel Astra further increased 11-184% when the smallest unregulated ultrafine particles were measured in the lab. These ultrafine particles are not measured in official tests but are thought to be the most harmful to human health – as they penetrate deep into the body – and have been linked with brain cancer.

Filter cleaning, to prevent the diesel particulate filter from clogging, can occur in all driving conditions, including in urban areas. In the tests, the number of particles continued to be higher during urban driving for 30 minutes after the cleaning had ended. Both models tested respected the legal limits for NOx.

Anna Krajinska said: “Regulated particles are only half the story. The smallest ultrafine particles are thought to pose a bigger threat yet they’re ignored by official tests. The next Euro pollution standard must close the loopholes and set limits for all pollutants. The endgame is a standard that demands zero emissions from cars on our roads.”

T&E said the new European Commission should also use its new powers to require type approval authorities to check cars on the road, after they have been sold – as the US Environmental Protection Agency does.

With three in four inhabitants of European cities exposed to unsafe levels of particles, particulate pollution is increasingly seen as ‘pollution enemy number one’. It is the type of air pollution most closely associated with cancer, and chronic exposure has been found to affect the heart and the lungs.[1]