Pricing emissions in Europe through a carbon market is seen as key to reducing aviation’s climate impact. However, the effectiveness of such a mechanism is heavily weakened if only a limited number of flights are included. The carbon market that encompasses Europe’s aviation sector, known as the EU ETS, currently only applies to flights within the European Economic Area (EEA), and has had limited impact on reducing carbon emissions.

A new study by Transport & Environment (T&E) and Carbon Market Watch shows that enlarging the scope of the EU ETS to all flights departing from EEA airports increases expected emissions reductions by 53% compared to the current proposal, and by 113% if applied to both incoming and outgoing flights. European legislators need to significantly increase the ambition of the EU ETSto properly tackle aviation’s climate problem, T&E and Carbon Market Watch say.

Cumulative reduction in emissions in the EC proposal, semi-scope and full scope

Daniele Rao, Policy Officer at Carbon Market Watch, said, “Europe claims to want to bring down aviation emissions but they continue to skyrocket. The only way to decarbonise the sector is to make airlines pay for their pollution inside and outside the EU. European airlines must raise their ambitions if they are to meet their climate obligations.”

Flights not currently regulated by the EU ETS – all flights departing from and arriving to the EU – currently represent two thirds of all European aviation emissions. For the most part, these are covered by the UN’s International Civil Aviation Organisation (ICAO)’s flawed offsetting scheme, Corsia. Many studies – including a European Commission impact assessment – have proven that Corsia is an ineffective tool for the climate. The oversupply of cheap offsets available under the scheme mean that airlines are not incentivised to use clean technology or sustainable fuels. Add the lack of transparency and enforceability of the scheme, and it’s clear Corsia has no role to play in decarbonising aviation, T&E says.

The extension of the carbon market to more flights would have economic and environmental  benefits. The rules of the scheme stipulate that airlines have to buy allowances to pay for their CO2 emissions. The purchase of these allowances generates revenue that can be used to invest in the decarbonisation of aviation. Under the current EU ETS proposal, revenues generated for the purchase of allowances between 2021 and 2035 would amount to €26.1 billion. If the EU ETS was applied to flights departing the EEA (semi-scope) and both departing and arriving flights (full-scope), auctioning revenues would increase to €60.8 billion and €95.4 billion respectively.

Despite claims by airlines that extending the EU ETS would be extremely costly for the industry and passengers, the scheme has always represented a small share of their operating costs (5.5% for intra-EEA flights over the period 2021-2035). Extending the scope would not exacerbate the financial burden on airlines. The study reveals that a semi-scope ETS would amount to a mere 3.4% of an airline’s operating cost over the 2021-2035 timeframe. This figure remains low as incoming flights are covered by the cheap Corsia offsetting credits. A full scope EU ETS would cost 6.8% of their operating costs over the same time period. 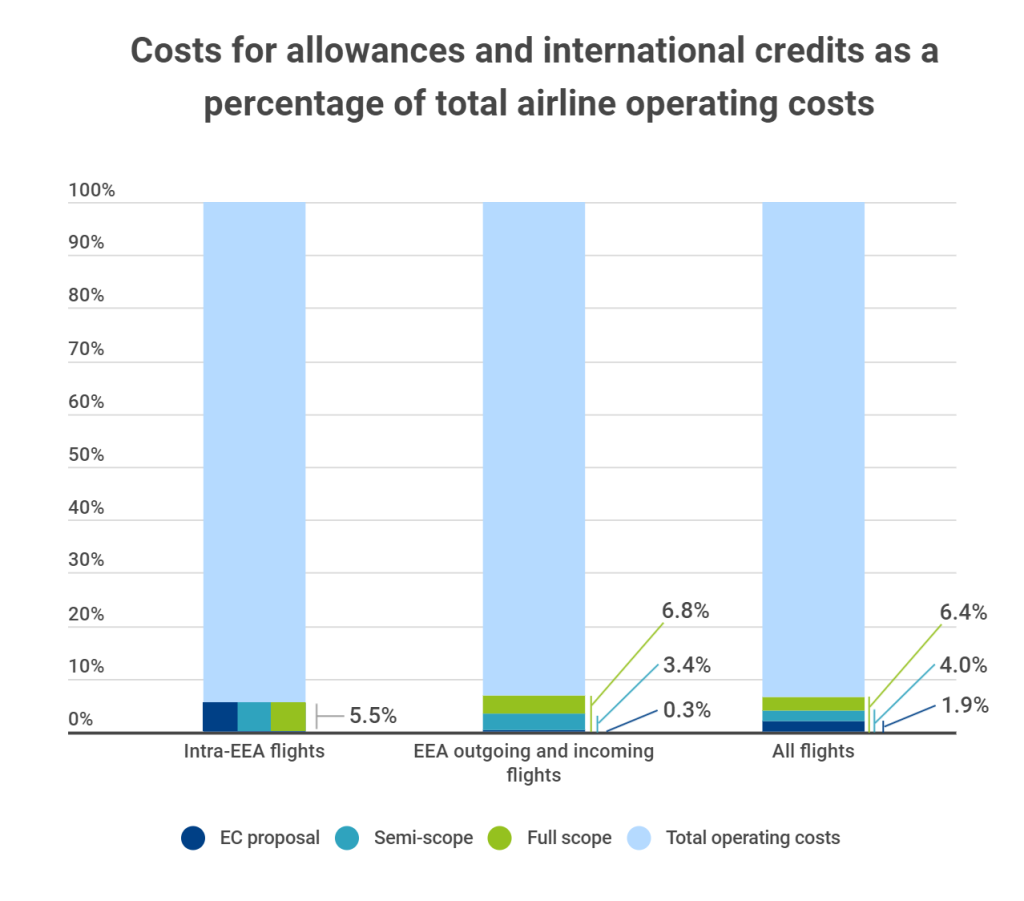 Jo Dardenne, aviation director at T&E concludes: “Airlines repeat time and again that offsetting is the solution to aviation’s climate problems. It’s bright as day: Corsia will do nothing to reduce emissions. These same airlines claim that a carbon market would be extremely costly to them and their customers. This assumption has been proven wrong. An effective carbon market will actually reduce carbon emissions, and only represent a fraction of airline operating costs. At a time of climate crisis, we need action not excuses. ”