By voting in favour of an agency, recommended by EMIS, the Parliament can bring an end to the current discredited system in which national regulators have been captured by their carmaker clients, and ensure appropriate checks are performed on the cars that member states have approved for sale. The plenary vote on the Type Approval Framework Regulation (or the Dalton report), as well as on the EMIS recommendations, will determine the ambition of the Parliament position: a strong stance will help secure a good final outcome later this year.

Reform is necessary because EMIS has shown the current system is riddled with inconsistent, slack and distorted interpretations of the rules by member states, which are favouring their national carmakers or treating vehicle approval as a commercial activity. In Europe Volkswagen still claims it has acted legally, and it has not been fined or prosecuted by the German, UK or Spanish authorities that approved its cars. Neither is Fiat being required to clean up its engines after extensive arguments with Germany about whether turning down the exhaust controls after 22 minutes is legal (a test lasts 20 minutes). This is despite it being investigated in the US over the same vehicles that were approved for sale in Europe by Italian, UK and Dutch authorities. (The only exception to this inaction by regulators is France, where the authorities are investigating Renault and Peugeot-Citroën for emissions cheating.)

Following a T&E document request, the Spanish government released its Dieselgate investigation report. As was the case with similar investigations, the report concludes that most vehicles have very high emissions in the real world as a result of carmakers turning down emissions controls. For example, some Nissan engines, exceed limits by up to 12 times. However, the Spanish type approval authority is not intending to take any action – as has become the norm in Europe. The regulator has simply concurred with the manufacturer’s explanation that they switch off emission controls to protect the engine without further scrutiny. The health of the engine is, paradoxically, more important in Europe than the health of citizens.

This failure to act and bring carmakers to account is symptomatic of Europe’s failed vehicle type approval system – failure caused by national regulatory capture and collusion with the car industry. The reform is urgently needed: it would put in place an independent EU regulator that would withstand industry and political influence and rigorously check vehicles on the road. The initial approval of cars would remain with member states; the European Vehicle Surveillance Agency being responsible for checking that cars after sale comply with the rules – a task that member states are currently responsible for but generally do not perform.

This does not need to be a large bureaucracy. Rather it can easily rely on the existing test facilities, such as the emissions labs of the Joint Research Centre (JRC) or independent technical services. But what is needed is, firstly, an independent board to take decisions above national regulators; and, secondly, powers to conduct tests and take action in cases of non-compliance. We all drive the same car models across Europe, so tasking one authority to do spot checks would save resources for many national market surveillance agencies. 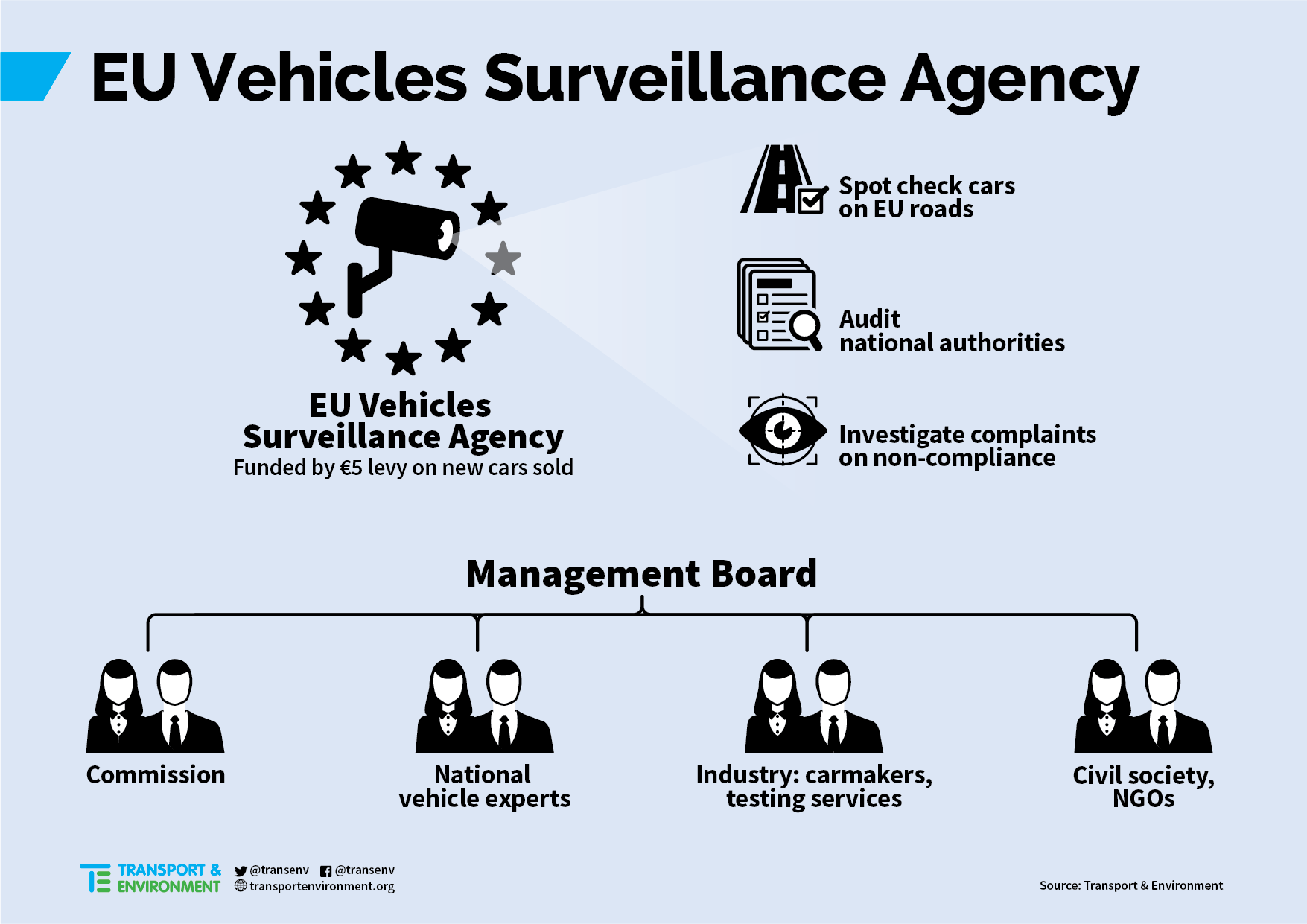 Why should an agency and not the Commission perform this task? We applaud the current Commission efforts to get both member states and carmakers to comply with legislation. But past commissioners have been heavily swayed by industry pressure, leading to weak and delayed rules – as the EMIS conclusions clearly show. Only an independent authority with a clear mandate, distant from political meddling, can ensure that checks happen as intended and law breakers are penalised. The Commission would still have effective enforcement powers, for example, in coordinating the new Forum on Enforcement and having the final word in disputes among member states. Meanwhile, responsibility for vehicle tests would sit with the separate, independent authority.

MEPs have an opportunity to make Dieselgate history by supporting the amendments on the EU Vehicles Surveillance Agency. This will make the EU vehicle testing system one we can be proud of and ensure we are not reliant on the US to discover European carmakers cheating.