Plug-in cars are in the midst of a boom, accounting for almost every fifth car bought across the EU in 2021. As their sales soar and performance improves, more and more carmakers are now committing to go 100% electric from 2030 onwards. But despite the most optimal zero emission technology to decarbonise cars – batteries – now clear, some in the oil and automotive industry including Bosch, Porsche and Europe’s oil lobby FuelsEurope are pushing for synthetic petrol and diesel, or “e(lectro)” fuels instead.

E-fuels are made by an expensive process which turns electricity into hydrogen, which in turn is combined with CO2 to produce liquid fuel that can be similar to petrol or diesel used in conventional engines (as well as kerosene used in aviation). Its proponents claim that if renewable electricity is used and CO2 is captured from the air, then the e-petrol and e-diesel are climate neutral fuels that will also reduce pollution. So the argument goes: instead of decarbonising engines, why don’t we decarbonise the fuel itself. 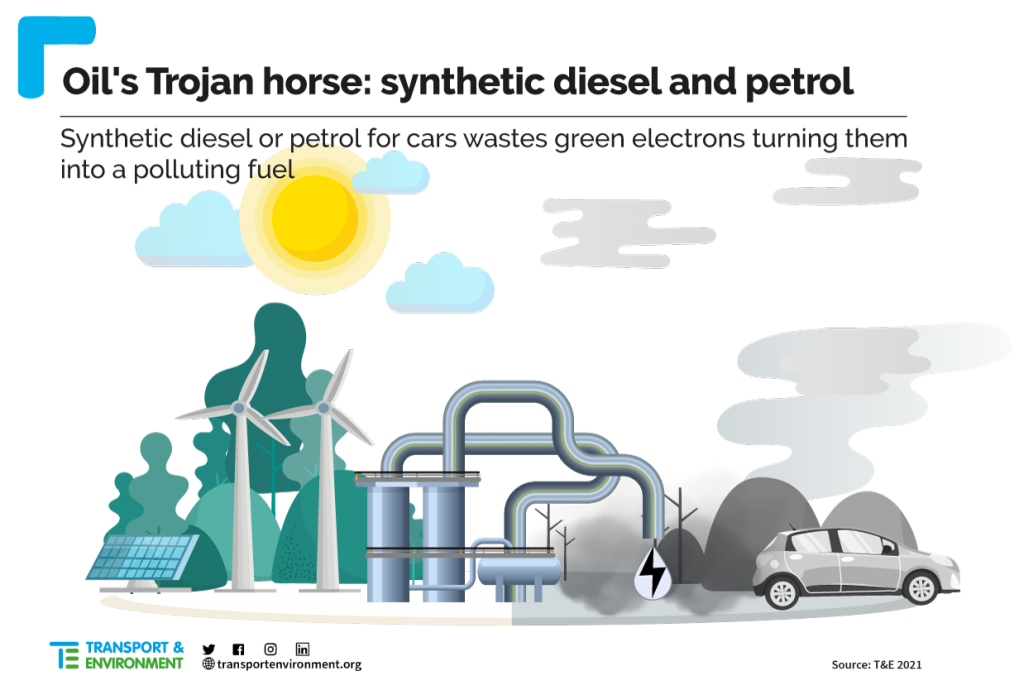 T&E decided to put these clean fuel claims to test and commissioned IFP Energies Nouvelles to run a series of lab based tests simulating real-world driving (WLTC and RDE) to measure the emissions of different e-petrol blends in an A-class (A180) Mercedes.

Despite much publicity from some auto suppliers and the oil industry, the e-petrol to perform the tests could not be purchased due to lack of commercial production, IFPEN had to blend three e-fuel blends representative of potential future fuel that are compatible with petrol cars. Two different 100% e-petrol blends and one blending 2nd generation ethanol (10%) and e-fuel were made. The emissions were compared to the standard E10 EU petrol.

The results of pollutant emissions show that:

Overall, the testing shows that e-petrol is not a clean fuel and, beyond particles, will do little to reduce toxic pollutant emissions of both regulated and unregulated pollutants compared to petrol fuel used today. To find out more, download the full report and test results.

UPDATE: In response to the e-fuels testing, fossil fuel industry lobby group FuelsEurope accused T&E of cherry-picking the results, but here we debunk each of their points.