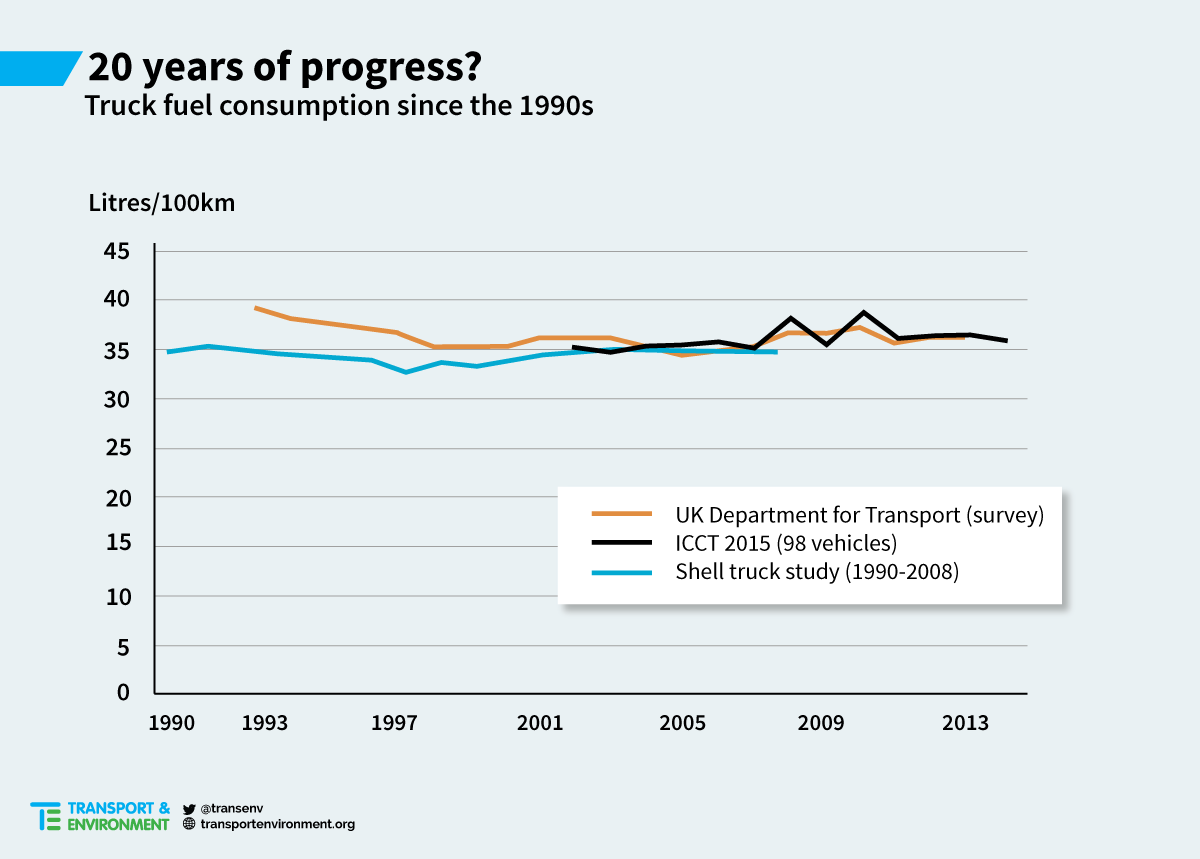 New truck fuel economy standards in the US mean its heavy-duty vehicles will outperform Europe’s in the near future, the study by the International Council for Clean Transportation finds. Europe’s stagnant truck fuel economy coincided with a trend towards heavier vehicles and larger engines.

William Todts, freight manager at T&E, said: “Truckmakers claim we can trust them to deliver more efficient trucks. The reality is that for the last decade they’ve made virtually no progress in fuel efficiency while for much of that time they are alleged to have operated a cartel. It’s high time we shift gears and introduce fuel economy standards for trucks.”

Truck emissions in Europe have risen sharply in recent decades – 36% between 1990 and 2010, despite the 2008 economic crisis – due to their high mileage and fuel consumption well above 30 liters per 100km on average. CO2 emissions are directly related to the fuel economy of internal-combustion vehicles, with more fuel-efficient vehicles emitting less greenhouse gas.

Pressure has been building on the EU to act on truck fuel-efficiency standards since the US Environmental Protection Agency in June proposed a new 24% target for improvement in truck fuel economy by 2027, on top of limits introduced in 2011. Four EU countries have told the European Commission that limits on truck CO2 emissions are required if the EU is to meet its 2030 climate targets. [1]

“The Commission’s lack of progress on truck CO2 is spectacular. A decade after EU leaders first demanded a strategy to reduce truck carbon emissions we haven’t even decided how we will measure truck CO2. Meanwhile the Americans introduced their first truck CO2 limits in 2011 and now the EPA is finalising new targets for after 2020.”

The Commission and EU truckmakers have been working together since 2010 on tests to measure truck fuel consumption. The tests are based on a software simulation tool called VECTO, which will gradually become mandatory for new trucks from 2018.

European manufacturers still have a leading position on the global truck market, accounting for over 40% of total global production.

[1] Belgium, the Netherlands, Slovenia and the UK told the European Commission in June that limits on lorry CO2 emissions were required if the EU is to meet its 2030 climate targets.