This is due to a number of pros and cons that this fuel offers compared to the other fossil liquid fuels used by ships – heavy fuel oil (HFO) and marine gas oil (MGO). First, let’s look at the facts: using LNG over HFO is beneficial to air quality, which has been documented by many studies, including those produced by T&E. So a shipping fleet running on LNG would have real health benefits. But LNG isn’t the only fossil technology that could reduce air pollution while we are waiting for zero-emission fuels like hydrogen. Cleaner marine gas oil with 10 ppm sulphur content (similar to road fuels), coupled with selective catalytic reduction (SCR) systems and diesel particulate filters (DPF), could deliver air pollution benefits similar to LNG. But, unlike natural gas, these technologies won’t require changing ships or investing in new expensive bunkering refueling infrastructure as LNG would. If we are looking for transitional air pollution reduction options, cleaning up the existing fuel is a cheaper and more sensible way to go.

When one starts looking into the greenhouse gas (GHG) footprint of LNG vessels and their climate impact, the picture is even less rosey.

There have been numerous studies [1, 2, 3] showing LNG’s GHG footprint is either comparable to that of MGO (the cleanest oil-based marine fuel) or worse. In theory the lower carbon content of LNG brings down CO2 emissions, but this is offset by the problem of LNG, the associated methane slip and leakage during the extraction, transportation, bunkering and especially onboard use of LNG. Fossil methane (CH4) being 30 times more potent a GHG (when averaged over 100 years) than CO2, LNG use risks actually increasing shipping’s climate impact as opposed to reducing it.

Industry associations have made several attempts to raise hopes about LNG’s supposedly “green” credentials. SEALNG, an industry organisation promoting liquefied natural gas as a fuel for ships, and the Society for Gas as a Marine Fuel (SGMF) jointly commissioned and published a study on the climate benefits of LNG for ships. The study claims up to 21% GHG savings on a well-to-wake basis if ships use LNG over alternative fossil fuels. The research was undertaken by the consultancy Thinkstep.

Following this publication, Dr Elizabeth Lindstad, chief scientist at the SINTEF Ocean research organisation in Norway, reached out to T&E with her commentary on the Thinkstep study. In her commentary, Dr Lindstad raises several issues with the methodology of the Thinkstep analysis and, based on the Sintef engine measurements, argues that in most cases LNG’s GHG footprint will actually be worse than that of MGO. T&E decided to publish this commentary in order to raise public and industry awareness of the dangers of a large scale shift to LNG in the maritime sector.

In addition, based on AidaNOVA’s engine specifications and Dr Lindstad’s comment, T&E estimated the most likely GHG footprint of AidaNOVA compared to its hypothetical equivalent running on MGO (see image below). This shows that LNG is higher emitting. 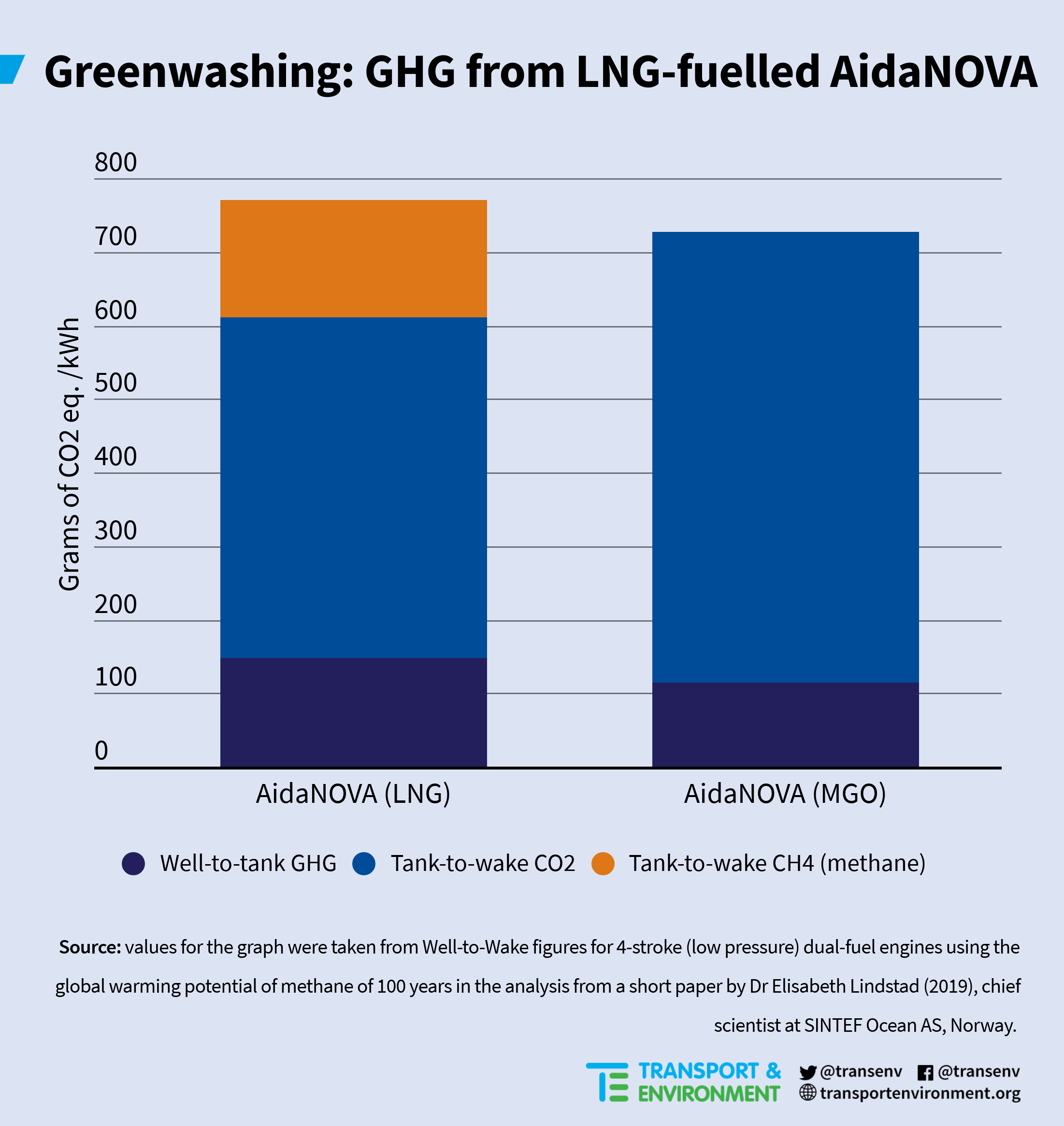 Based on the evidence, we believe LNG is the wrong pathway for decarbonising shipping. LNG requires massive investment in bunkering infrastructure and LNG-compatible ships, which cannot deliver carbon-free transport but run the risk of creating stranded assets, some of which will be publicly funded.