Extending the EU’s carbon market to road transport would deliver no additional emissions cuts in 2030 and minimal savings in 2050, the analysis shows. That’s because drivers and hauliers are less responsive to ETS price increases – paid at the fuel pump – than global industries such as steel. This additional demand for permits would also drive up the carbon permit price (to almost €90 a tonne) for the other industries. Including road transport in the ETS would also mean removing it from national climate targets (under the Effort Sharing law), which means governments would no longer be obliged to cut road transport emissions. 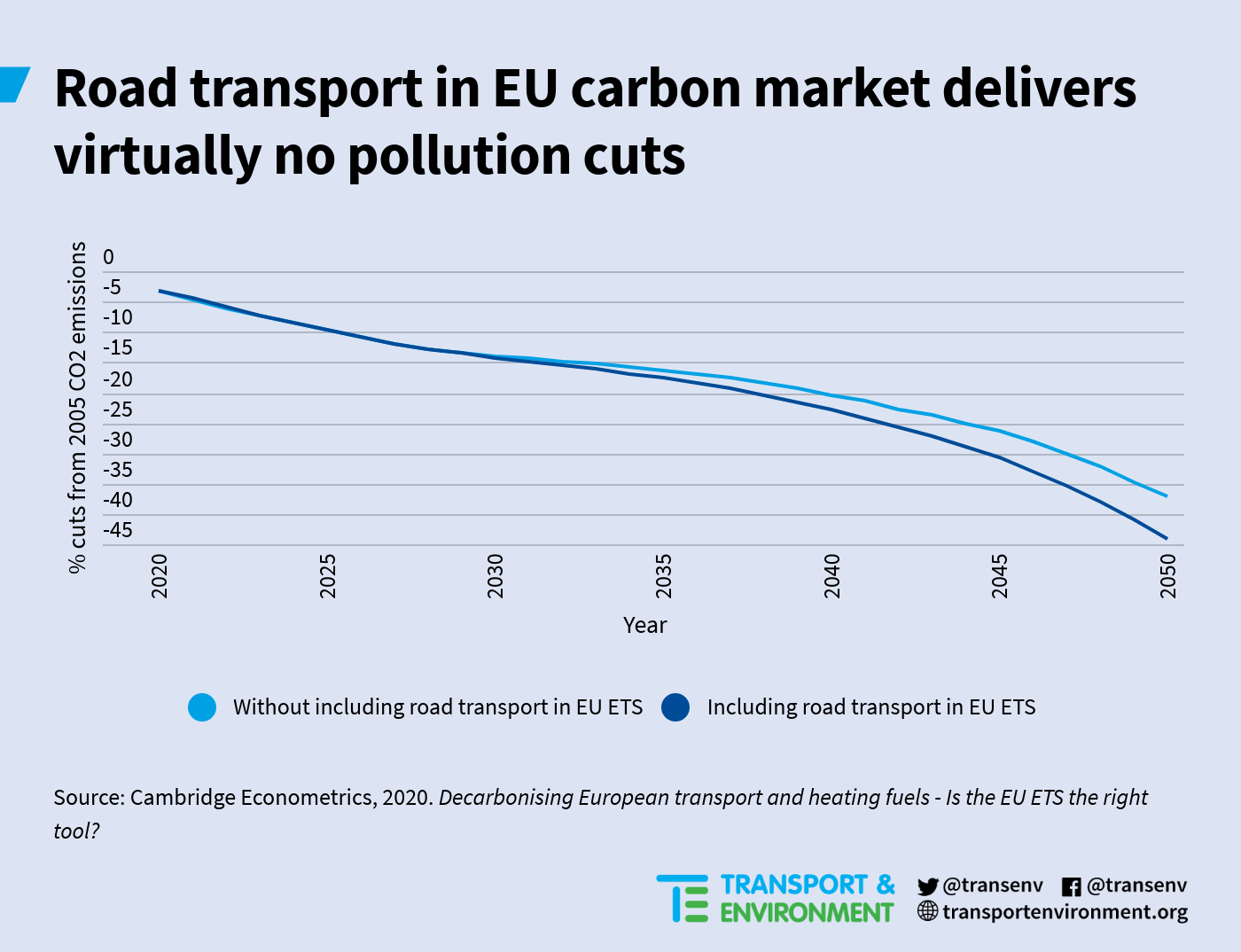 Carlos Calvo Ambel, senior director for analysis at T&E, said: “Putting cars and trucks in the existing EU carbon market won’t work for the environment, people or the economy. It won’t save any emissions but will jack up prices for industry and low-income families who can’t simply go out and buy a cleaner car immediately. EU vehicle CO2 standards and greener taxes at national level are what’s needed to decarbonise road transport.”

T&E said extending the EU carbon market to road transport is supported by the European car industry [2] because it puts the burden on drivers while carmakers can continue producing polluting vehicles, including lucrative SUVs. This would delay real action to cut vehicle emissions such as national taxation favouring zero-emissions cars and trucks, deploying charging infrastructure, and setting phase-out dates for fossil-fuel vehicle sales.

Low-income households would be hardest hit at the pump by the ETS price increase as they could not afford to switch to new, cleaner vehicles, the study finds. In the medium term, when there is a strong second-hand electric vehicle market, progressively higher fuel taxes will help push the last remaining fossil-fuel vehicles off Europe’s roads, T&E said.

Carlos Calvo Ambel concluded: “Making fossil fuels more expensive will be important in the longer run if we want to consign the last remaining fossil-fuel vehicles to the scrap yard. But we need fuel and carbon tax increases to be fair and gradual. The simplest way to achieve that is through national fuel taxes or carbon pricing schemes such as the one recently introduced by Germany. By then, vibrant electric vehicle markets will provide affordable alternatives to polluting road transport.”

[1] In her political guidelines for the new European Commission (September 2019), president Ursula von der Leyen proposed extending the EU emissions trading system to cover “traffic and construction”. As part of the EU Green Deal (December 2019), the language was modified to “consider applying the ETS to road transport”. The Commission is exploring the idea ahead of its 2030 Climate Target Plan expected in September.