The IAA Motor show returned this month, seeking to shake off its petrol-head image with electric cars and even bicycles on display. However, analysis from Transport & Environment showed that far from the industry reinventing itself, the IAA was more notable for the worrying trend towards engine-driven SUVs.

All five of the new vehicles that Mercedes-Benz unveiled at the show are battery-powered, while Volkswagen led discussions on autonomous driving, battery technology and the company’s plan to reduce carbon dioxide emissions. BMW displayed a concept vehicle made entirely of recycled materials.

Lucien Mathieu, e-mobility analysis manager at T&E, said: “The car industry is seeking to reinvent itself but actions speak louder than words. It can’t talk about sustainability when they are still making a growing number of their sales through engine-driven SUVs.”

The share of SUVs with an engine rose by 3 percentage points up to 42% – more than the growth in electric vehicles. In just over 10 years SUVs went from a peripheral 10% of sales to nearly half of all car sales in Europe today (45%). 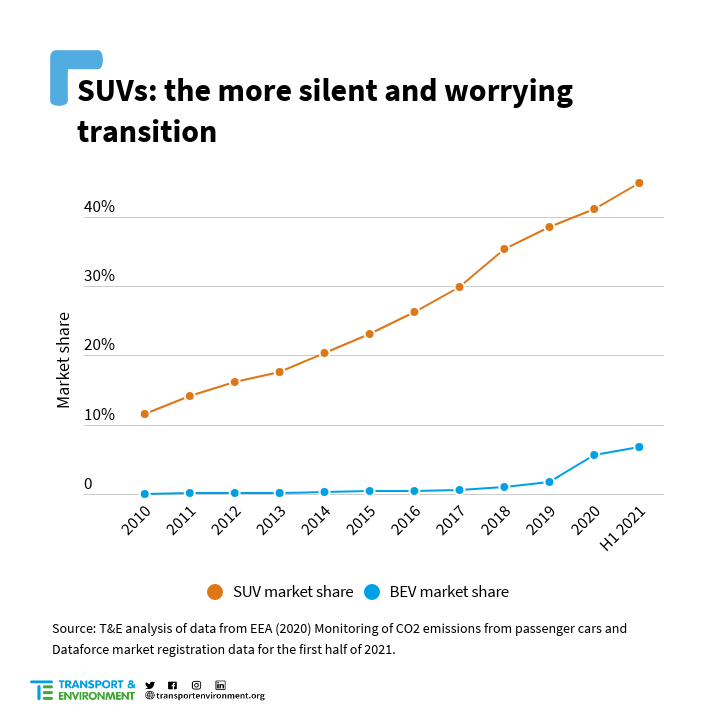 While only a third of the cars on display have a combustion engine, most carmakers are still expected to rely on these for the majority of their sales in the coming years. Carmakers can still comply with the CO2 emission targets until 2029 with the fully electric car sales close to today’s levels. That means millions and millions of new car sales will continue to have diesel and petrol engines – and many will be large SUVs.

T&E levelled a similar charge at the supplier Bosch, whose focus on digital and connected products for electric cars was being undermined by its supervisory board chairman encouraging the auto industry to delay the e-mobility transition. The company is also involved in the e-fuel alliance which actively lobbies to delay vehicle electrification.

In opening the motor show, outgoing German chancellor Angela Merkel warned against focusing exclusively on electric cars in the race to decarbonise transport, urging carmakers to stay open to alternative technologies. She said automakers should explore alternatives such as hydrogen. But, as T&E points out, hydrogen cars need 2.5 times more energy to travel the same distance as a battery electric car and would account for only 0.3% of cars produced in Europe in 2030.