Transport is the largest consumer of oil in the EU, and the EU is dependent on imports for 97% of its oil products. One out of four barrels of crude oil that supplies the Bloc comes from Russia. In the context of the Russian Federation’s invasion of Ukraine, this briefing compiles key information on the EU’s dependence on Russian oil.

The dependence on Russian oil is not uniform across the continent: Slovakia is the most dependent member state, with four out of five barrels of all oil products originating from Russia, while the dependency of Poland, Finland, and Lithuania is more than two thirds. From 2004 to 2017, imports of oil products from Russia were relatively constant, exceeding 200 Mt per year. There has been a reduction in Russian imports from 2016, with 2020 imports being the lowest they’ve been since the year 2000. 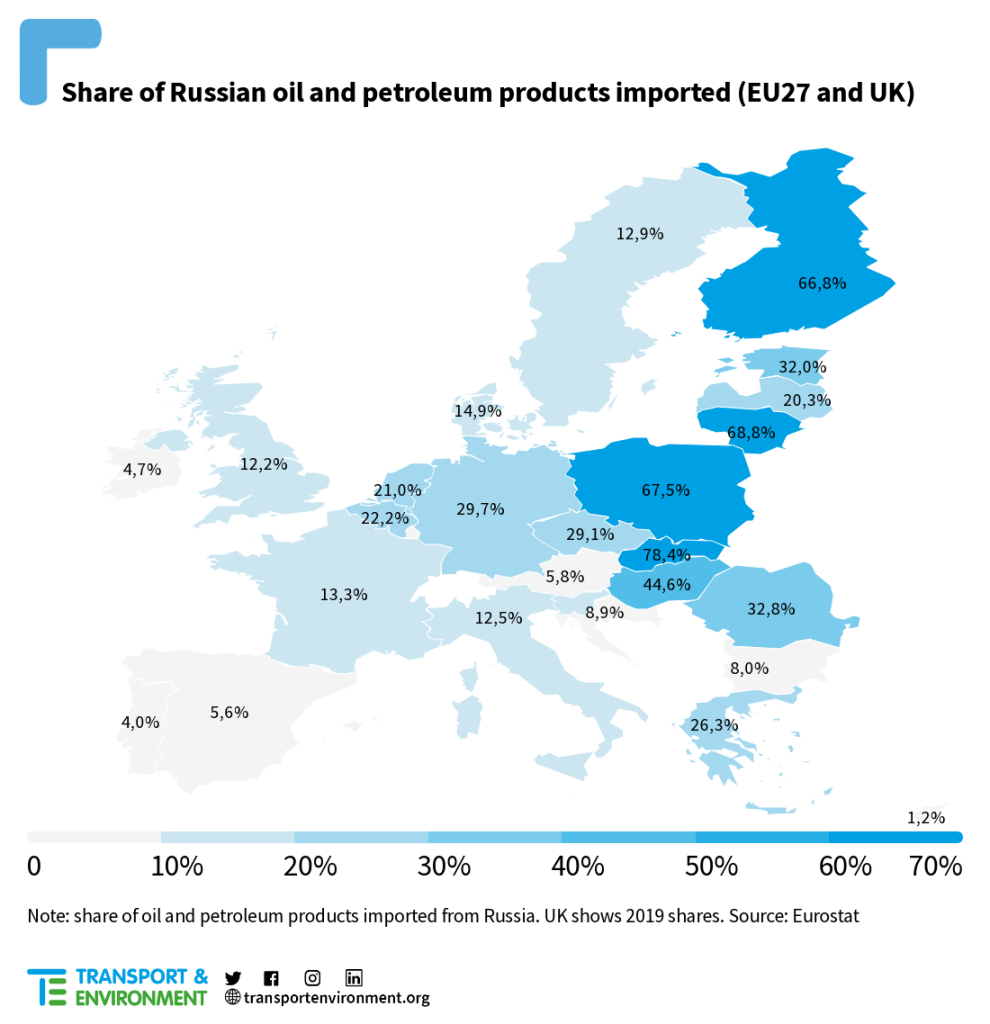 The EU and UK are the largest trading partners with Russia for fuel products (oil, gas, and coal), accounting for 50% of revenues in 2019.  In the recent context of the war in Ukraine, Russia has been synonymous with gas, but it is actually oil that generates the largest revenues for the country. In 2021, oil products being sold on the global market earned Russia three times more money than gas.  This is largely inline with the value of EU imports.

The EU is connected by pipelines to Russian oil, but most of the imports into the Bloc are via oil tankers and ports. About 70% to 85% of imported crude oil from Russia is shipped from its western ports on the Baltic sea and the Black sea and in smaller volumes from its Artics terminals, while the remaining is directly delivered through the Druzhba pipeline. In 2019, crude oil coming by pipeline accounted for 4% to 8% of the EU’s total crude imports. The Druzhba pipeline supplies refineries in Poland, Germany, Hungary, Slovakia and Czechia.  The countries with the largest imports of Russian crude oil are the Netherlands, Italy, France and Finland. Only the top 10 ports importing Russian crude oil account for 51% of all imports by sea.

In conclusion, the European Commission must include Russian crude oil in its upcoming energy independence strategy. While the EU is heavily reliant on Russian crude, it is also one of the key revenue streams of Russian exports and has been helping to fund its military.