From 2018 all new cars would be allowed to emit 50% more lung cancer-causing particulates (PN) than allowed under Euro 6 air quality legislation, according to the European Commission’s leaked draft proposal. But some governments, including those of Spain and Sweden, want to delay its introduction by one year as well allowing 50% more PN. The car industry wants to allow emissions 300% higher, enabling carmakers to avoid fitting a gasoline particulate filter. If the car was fitted with this filter, emissions would be around 100 times lower than without one.

The Dieselgate scandal has focused on the high nitrogen oxides (NOx) emissions of diesel engines, but advanced Gasoline Direct Injection (petrol) engines are now the main concern regarding high emissions of particle numbers, many of which are so small they are able to transport toxic metals and hydrocarbons directly into the blood via the lungs. To tackle high exhaust PNs the Commission has proposed a third RDE package to be implemented from 2018 for all new cars.

The draft regulation also opens the door to only testing cars which use petrol blends that produce fewer particles. The Commission is also set to propose measuring instruments that fail to count some of the smallest particles – though they cause the greatest harm. 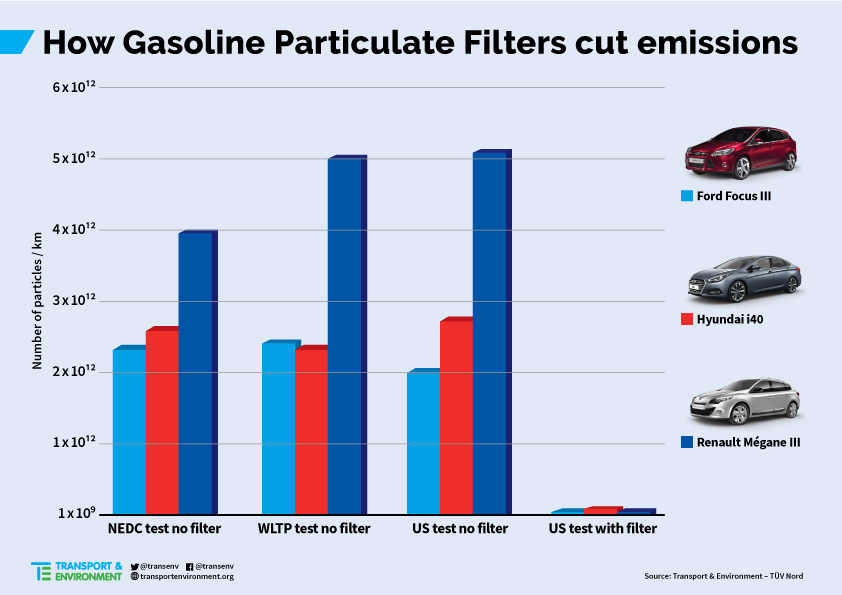 Florent Grelier, clean vehicles engineer at T&E, said: “Until now the appalling air pollution in our cities has been largely caused by diesel vehicles fitted with cheap, ineffective exhaust treatment that pumped out nitrogen oxide emissions over five times the legal limit. Weak tests and compromised type approval authorities enabled manufacturers to get away with this. Now there is a new source of particle emissions, petrol cars with advanced engines. A cheap and effective solution exists in the gasoline particulate filter, but carmakers want to relax the test conditions so they can save the €25 that would fix the problem for good.”

Harmful levels of air pollution are endemic in European cities, especially close to roads, causing around 500,000 premature deaths annually and costing the EU a staggering €1 trillion a year. Despite the fact that air pollution limits for cars, vans and trucks (Euro standards) have been progressively tightened on paper, obsolete tests and optimisation strategies deployed by car manufacturers have meant that regulations have failed to deliver significant real-world improvements. This has been made possible by national approval authorities failing to scrutinise what the manufacturers are doing.

Florent Grelier concluded: “The EU was warned about the risks of new gasoline engines three years ago. Finally the regulations are being finalised but in a way that bends to the will of the automotive industry. This is a Petrolgate scandal is in the making. Unless the European Commission and governments establish strict test procedures to protect the industry from its own short-sightedness, within a few years we will see continuing high levels of particles killing hundreds of thousands of citizens prematurely.”