The expected revenues from the EU’s windfall tax will not even cover the €29 billion oil companies benefit from in the form of fuel duty cuts[1], new Transport & Environment (T&E) analysis shows. In a year when oil companies have already earned nearly €70 billion in profits [2], T&E has called on governments to end fuel subsidies that are filling the pockets of oil majors and to tax them more.

Agathe Bounfour, oil campaign lead at T&E, said: “Governments have given away nearly €30 billion in taxpayer-funded cuts to fuel duty, which has propped up demand for oil. Yet, the EU’s planned windfall tax still leaves governments in the red. It’s no wonder that the CEO of Shell supports the EU’s plans. European leaders can end this imbalance by removing regressive subsidies and getting oil companies to foot the bill.”

Since Russia’s invasion of Ukraine, EU governments have subsidised oil consumption to the tune of €29 billion, as T&E’s tracker shows. While some government tax rebates were only conceived for an initial period of three months, many have extended them until the end of the year and into 2023. Subsidies are an ineffective way of curbing prices, says T&E, as they increase demand, putting further pressure on prices. In the long run, governments face ever increasing oil import bills. Fuel tax subsidies also predominantly benefit wealthier consumers and are not targeted at the most vulnerable households. Targeted measures are more efficient from a social and environmental point of view, a previous T&E analysis  showed [3].

In September the EU announced its eye-catching €140 billion windfall tax on energy companies’ profits. But, as Table 1 shows, the majority of this falls on electricity providers, which includes renewable energy providers. European governments agreed that oil and gas companies should pay a minimum 33% “solidarity contribution” on their extra profits [3], which the EU estimates will bring in €25 billion. 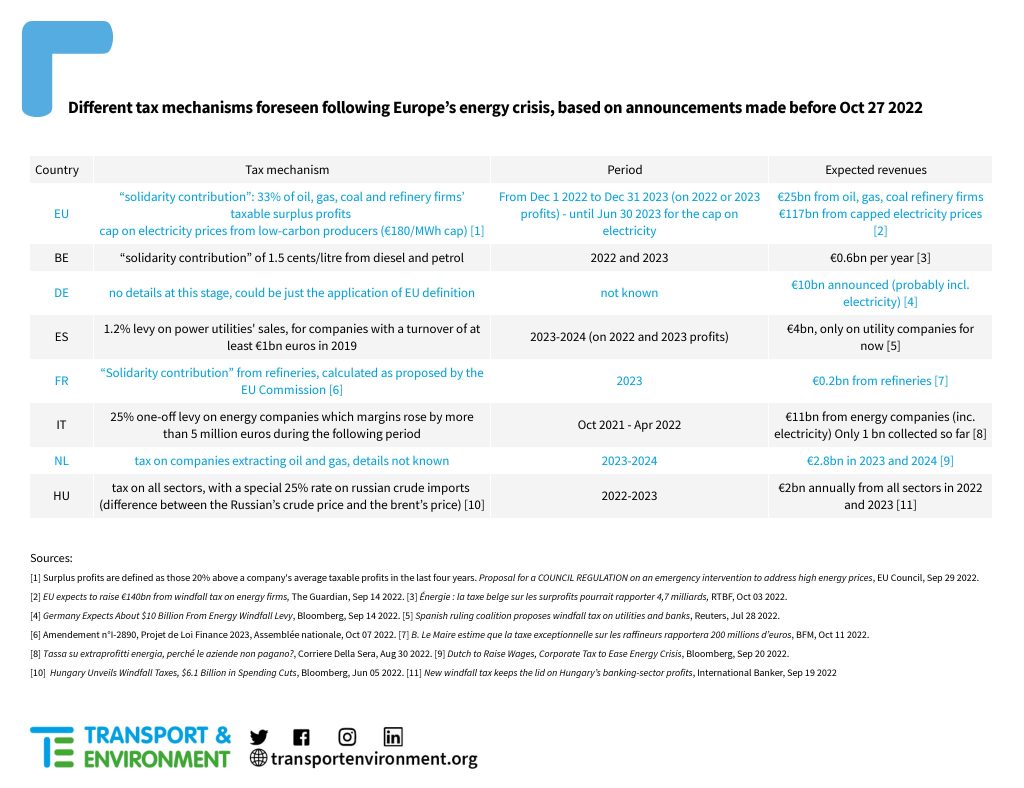 It is uncertain however whether even the €25 billion can be reached. France for example will levy just €200 million on oil and gas companies. Other governments, such as Germany and Spain, have announced levies that cover both electricity and the oil and gas sector, but the exact share for the latter remains unknown. In Italy, one of the first countries to implement the scheme, the estimated tax intake has been lower than expected with some companies postponing payment.

[1] The estimated €29bn cuts on fuel duty are based on T&E’s tracker, taking into account all of the petrol and diesel excise duty implemented by many member states since the beginning of 2022.

[2] Sum of Adjusted Net income of Total Energies (Link), ENI (Link), Repsol (Link), underlying replacement cost profit of BP (Link) and income attributable to shareholders of Shell (Link) in the first semester 2022. A 1.06 conversion rate between dollars and euros was used for ENI and REPSOL profits, based on the average 2022 rate until Oct 27 (Link).

[3] Research has shown that the impact of fuel tax cuts depends on the time horizon and elasticity of demand and supply. In the short-term, supply is relatively inelastic and tax cuts push prices up. In the long-term, supply adapts and oil imports increase. The effect of European fuel-tax cuts on the oil income of Russia, Gars et al, Nature, Sep 15 2022 (Link).

Oil companies also do not always pass on the fuel tax rebate to consumers, as research has shown.  A dereliction of fuel duty: Europe’s €9 billion gift to Putin and the rich, p7, Transport & Environment, Mar 22 2022 (Link).

[4] The expected €25bn revenues from the 33% “solidarity contribution” were announced by the EU Commission and based on “taxable surplus profits” from “fossil companies with activities in the crude petroleum, natural gas, coal and refinery sector” defined as those 20% above a company’s average profits in the last four years. The big integrated oil and gas companies are the main target of the tax, but it also includes independent and smaller coal and gas companies.