Europe burns over 17,000 tonnes of rapeseed and sunflower oil every day – the equivalent of 19 million bottles[1] – a new Transport & Environment study shows. This has contributed to spiralling food price rises as well as empty supermarket shelves in the wake of Russia’s invasion of Ukraine. T&E has called on governments to prioritise food over fuel and end the use of crop biofuels now.

Maik Marahrens, biofuels campaigner at T&E, said: “Supermarkets have had to ration vegetable oils and prices are soaring. At the same time, we are burning thousands of tonnes of sunflower and rapeseed oil in our cars every day. In a time of scarcity we must prioritise food over fuel.”

Ukraine accounts for 40% of the global sunflower oil exports and is also Europe’s largest supplier of rapeseed oil. Russia’s blockade of Ukrainian food exports is putting considerable pressure on supplies and, in turn, prices which are up to two and half times higher than previous years. In Germany, for example, cooking oils are among the six food categories with the highest price increase. 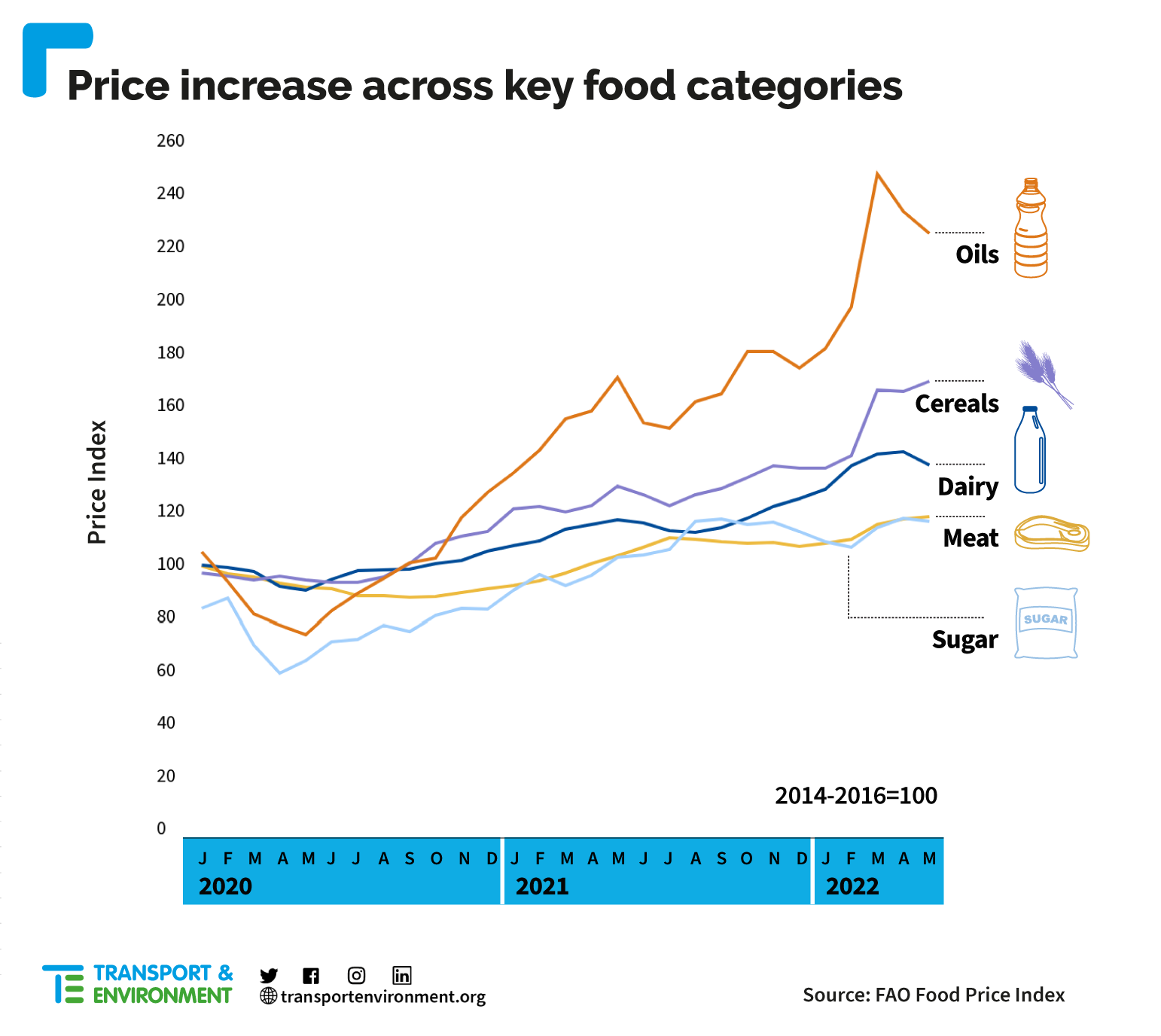 This is exacerbated by the use of vegetable oil in biofuels. 18% of the world’s vegetable oil production goes to biodiesel. Nearly all of this is fit for human consumption. In recent years, Europe put 58% of all rapeseed and 9% of all sunflower oil consumed in the region into its cars and trucks.

Food price inflation is pushing millions of people around the world into poverty. T&E previously reported that Europe burns 10,000 tonnes of wheat in its cars every day, piling pressure on countries like Egypt which are heavily reliant on imports. This has been made worse in recent weeks by governments across the world imposing export restrictions on key food crops, including oils. Recently, Indonesia temporarily banned exports of palm oil to stabilise local prices. At the same time Europe diverts significant amounts of palm oil (50% of the palm consumed in Europe) and soy oil (32%) to powering its cars and trucks.

Maik Marahrens, biofuels campaigner at T&E, concluded: “European governments have used ‘green’ fuel laws to artificially push up demand for crop biofuels. They therefore have the instruments at hand to stop this. Policymakers should end support for food crop biofuels now and help to avoid a growing global food catastrophe.”

The EU currently promotes crop biofuels in its green fuels law – the Renewable Energy Directive – a policy T&E has previously described as “the dumbest thing the EU has done in the name of the climate”. The current cap for crop biofuels is set at 2020 levels, with a maximum of 7%. While support for palm-based biofuels are set to end by 2030, T&E has called on policymakers to end support for all crop biofuels now.

The G7 leaders will be meeting in Germany from 26 to 28 June to, among others things, discuss global food security. This will likely pit several European countries in favour of some sort of restrictions on crop biofuels against the US which is pushing hard to increase biofuels production.