Chinese carmakers are starting to get a firm foothold on the European market, accounting for 5% of all BEVs sold so far this year. Based on current trends, they could be providing Europe with 9% to 18% of its battery electrics (BEV) in 2025, a new Transport & Environment study shows. The group warns that a failure of EU carmakers to scale up BEV supply could result in overseas companies capturing most of the mass market in Europe.

Julia Poliscanova, senior director at Transport & Environment, said: “European carmakers have slammed the brakes on their electric car offering at a time when Chinese and American carmakers are rapidly bringing new models to the market. If Europe wants to maintain the competitiveness of its car industry, the EU must introduce a strong industrial policy of its own to match the Chinese and Americans’ muscular support for EVs. The continent’s climate and jobs are at stake.”

The share of electric car sales in Europe dropped to 11% for the first half of 2022, down from 13% in the second half of last year. Growing electric vehicle sales in the United States and China suggest that a lack of regulatory incentives, not a supply chain crunch, is the main cause of Europe’s sluggish electrification efforts, says T&E.

BEV sales in China soared to nearly 18% of the new car market in the first half of 2022 while the share of EVs in the US grew 50%. In that same period the share of BEVs in Europe fell by two percentage points with Europeans facing excruciatingly long waiting times for electric models. 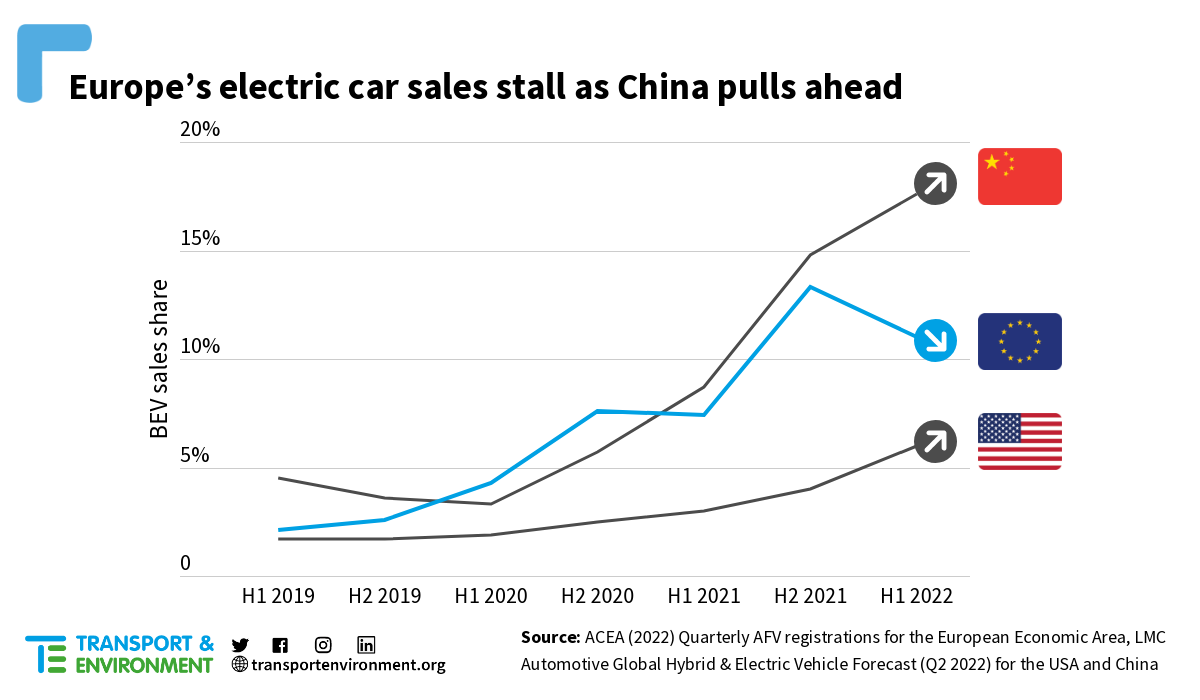 Julia Poliscanova added: “The absence of regulatory incentives is doing far more than the supply chain crunch to slow EV sales in Europe. The current car CO2 targets are not working. The EU must quickly lock in the 2035 phase-out of petrol and diesels and remove loopholes that weaken carmakers’ targets. It should also support measures such as low-cost leasing of electric cars to make them affordable for everyone.”

After an unprecedented drop in the average CO2 emissions from new cars in Europe following the introduction of ambitious 2020/21 CO2 standards (12% in both 2020 and 2021), EU car CO2 emissions decreased by only 2% in the first half of this year. This is because the targets are too weak, says T&E. Despite stagnating BEV sales, all but VW are on track to meet their 2022 CO2 target. 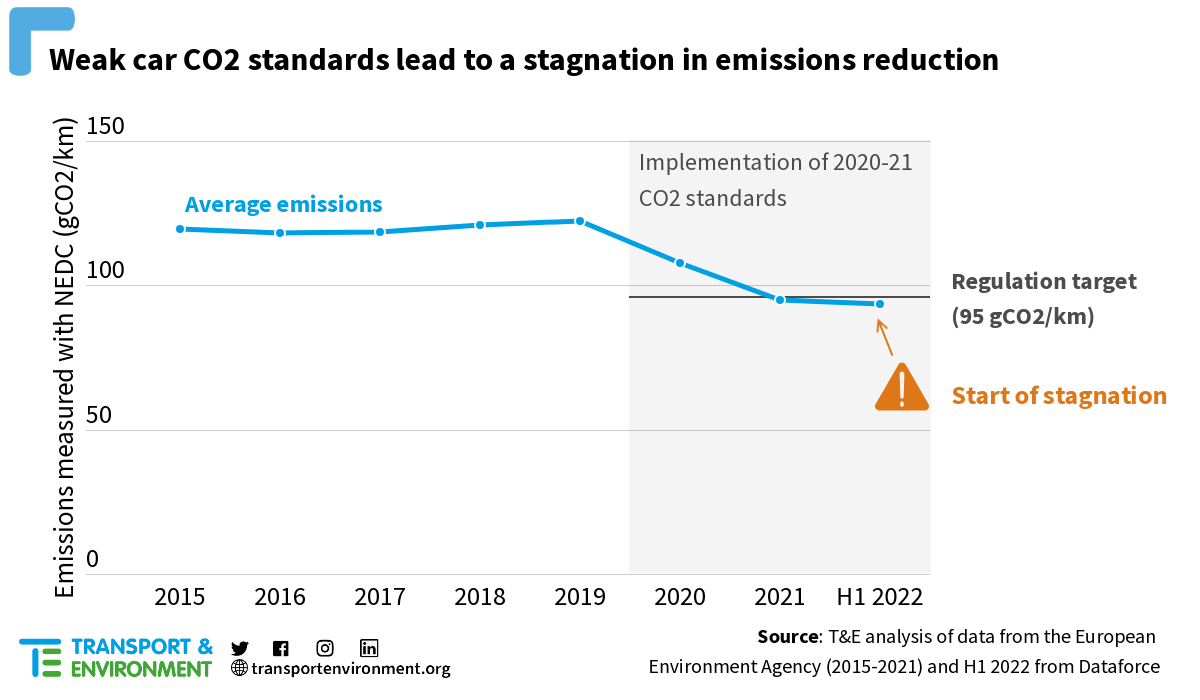 Carmakers’ own voluntary commitments would see BEVs make up over three-quarters of the car market in 2030. But if carmakers only do the minimum to meet the EU’s targets – as they have done up to now – BEV sales will be just 55%. This would see Europe miss out on 135 MtCO2 in emissions cuts over the course of the decade.

However, slowing supply and long waiting times are not the only challenge facing the European auto market. European carmakers are increasingly focusing on premium models, leaving the mass market, and with it, mass employment at risk of being dominated by overseas players. T&E recommends support for affordable electric cars in the form of low-cost leasing for electric vehicles as has been proposed in France.

T&E recommends that the EU and national governments: