The ten most polluting airlines in Europe received €683 million worth of free CO2 permits under the EU’s carbon market for aviation (the EU ETS) in 2021, new data analysed by Transport & Environment (T&E) shows. Up until Covid, the aviation sector was the fastest growing carbon polluter in the EU, yet is one of the top receivers of free pollution permits relative to their emissions under the EU ETS scheme. Ryanair and Lufthansa received €191 and €108 million worth of free pollution permits respectively in 2021.

Under the rules of the EU’s carbon market, all companies that fall under the scheme, including airlines, must report their emissions from the previous year. For air transport, only emissions for flights within Europe must be reported on. This leaves the bulk of aviation emissions – over 60% – which take place on extra-EU flights unaccounted for.

Airlines must also make public the number of allowances that they receive for free. Under the rules of the EU ETS, entities are granted carbon permits for free, which are gradually reduced over time. The European Commission claims that this prevents carbon leakage, where European firms relocate to countries with less stringent climate standards.

Andrew Murphy, aviation director at T&E, said: “The EU claims to be a global leader in carbon markets, but for too long has left the bulk of its aviation emissions underpriced and oversubsidised. As a result, the aviation industry has avoided paying its climate costs. These free allowances are a legacy that have no place, given the climate crisis we are facing. The EU needs to put an end to the get out of jail free cards for aviation.”

The 10 top airline polluters were collectively granted €683 million worth of free allowances last year. Some of these airlines, such as Air France, which received €79 million in free pollution permits and ranked fourth in T&E’s ranking of the most polluting airlines under the scheme, is seeking to weaken the EU ETS and asking for a three-year delay to the phase-out of free allowances – meaning that airlines would continue to pollute for free after 2030. 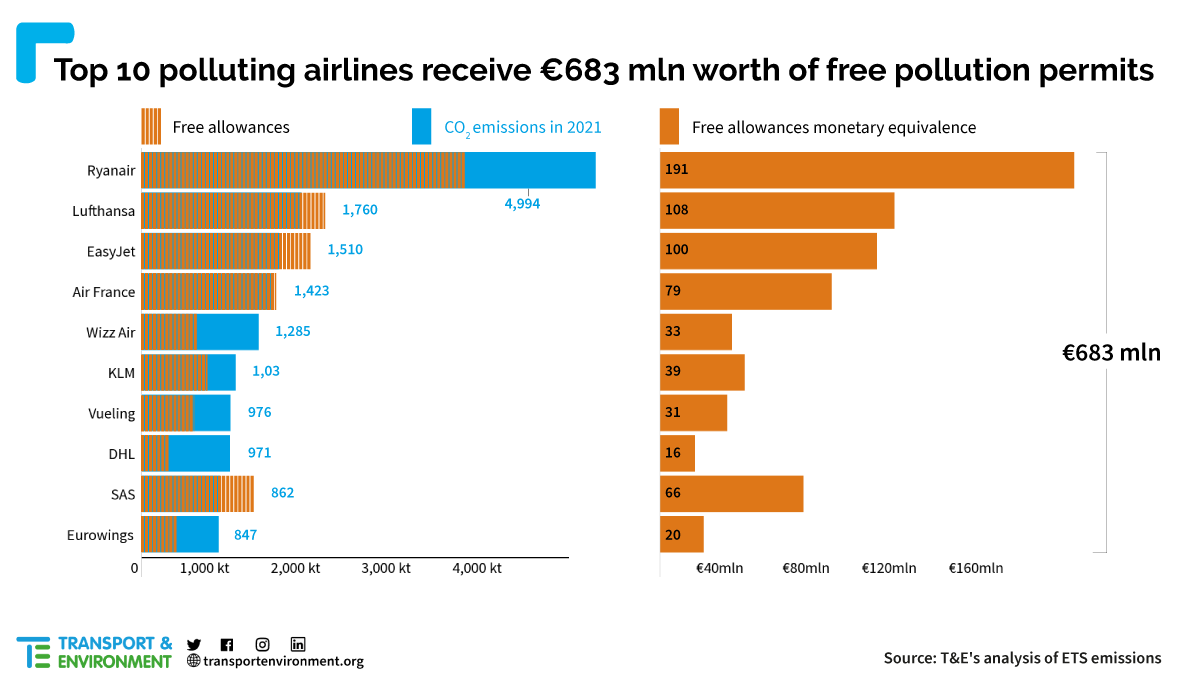 T&E’s analysis of the emissions data shows that in 2021, among the top 10, four airlines – Lufthansa, easyJet, Air France and SAS – received more pollution permits than the amount of CO2 they emitted last year. Airlines can then keep hold of their free allowances and use them in future years. T&E is calling for a change to the free allowance rules in the EU ETS, to put an end to this practice.

“Although the industry has not fully recuperated from the pandemic slump, airline emissions figures are still way above where they should be.The EU’s climate packages for aviation are not stringent enough. The pandemic offered a once in a lifetime opportunity to reduce the growth of the aviation sector, and an incentive to build back green. But none of this has happened.” concluded Andrew Murphy.

[1] We combine the Swiss ETS and EU ETS for this analysis.