In a new position paper, T&E reports test results which show that even Euro VI D trucks can exceed EU pollution limits on the road and provides policy recommendations for a new Euro VII pollutant emission standard to slash toxic pollution from trucks and buses.

On road testing of an IVECO Euro VI D diesel long-haul truck shows that even new Euro VI trucks still fail to comply with legal emission limits on the road. The testing, undertaken in 2021 by the Technical University of Graz on behalf of T&E found that:

1. The IVECO truck tested does not comply with the Euro VI nitrogen oxide (NOx) emission limit during official on-road tests used for verifying emissions compliance in the EU. The truck exceeded the on-road NOx emission limit (690 mg/kWh) by 11%, emitting 768 mg/kWh on the test. The high NOx emissions measured during this test mean that the truck is non-compliant with the Euro VI D regulation. 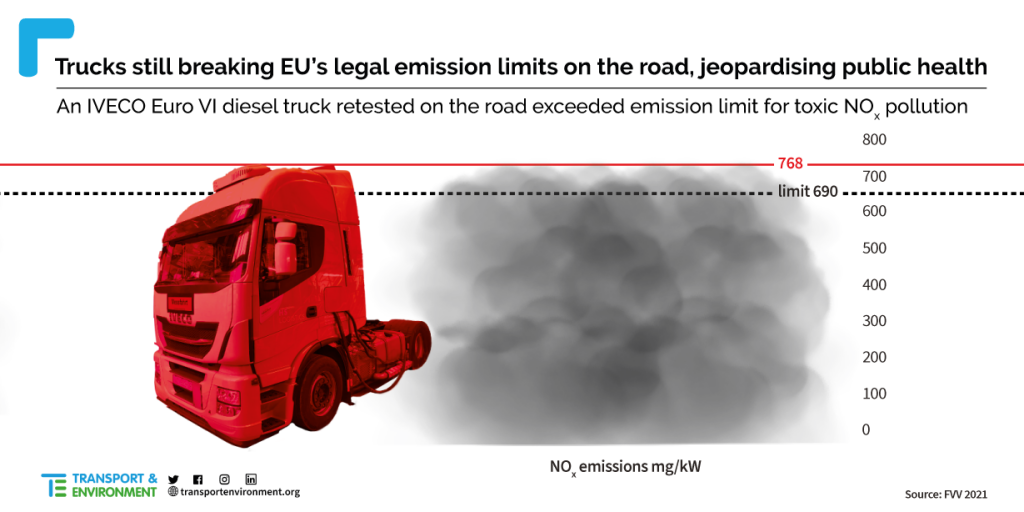 2. The truck had particularly high urban NOx emissions on tests replicating a typical supermarket delivery trip and low speed driving typical in towns and cities. Emissions during the urban part of the test were at least double the Euro VI NOx emission limit. This indicates that even Euro VI D trucks can emit large amounts of toxic NOx pollution when driving in towns or cities.

3. On one of the city driving tests the NOx emission control system malfunctioned resulting in huge NOx emissions on the road. The Adblue dosing system critical for NOx control failed. While a fault light did show up on the dashboard, the malfunction resulted in NOx emissions which were 11 times higher than the Euro VI limit during urban driving.

Download the paper to read the full results and recommendations.