The truck lobby is pushing for zero- and low-emission trucks such as electric, hybrid and efficient gas-powered lorries, to count multiple times (up to five times) towards the emission reduction goals. This accounting trick will enable truckmakers to sell only a limited number of electric trucks and still meet – on paper – the low 2025 CO2 target they propose (-7%), while truck CO2 emissions would remain the same in 2025 as they were in 2019 [1].

Stef Cornelis, cleaner truck officer with T&E, said:“Truckmakers claim they are leading on fuel efficiency and are now announcing an electric trucks splurge. The reality is they are lobbying Berlin and Brussels to achieve the exact opposite! If ACEA and the VDA get their way truckmakers will sell minimal numbers of electric trucks and fuel efficiency would actually get worse!

Last May, the European Commission proposed to reduce fuel consumption of new trucks by 15% in 2025 and at least 30% in 2030, compared to 2019 models. Big businesses like IKEA, Unilever, Carrefour and Nestlé, trucking companies, as well as a group of EU countries, including truck-producing nations, are asking for the cost effective fuel savings to be captured, which means setting a 2025 target of 20% [3]. Whereas, ACEA and the VDA want a 7% cut in 2025 and 16% in 2030.

Rising truck emissions will also jeopardise Europe’s and Germany’s climate goals. T&E’s analysis show that the truck lobby proposal would mean that emissions from heavy-duty vehicles would continue to increase annually, instead of decreasing, adding an extra two million tonnes of CO2 in 2025 and three million tonnes in 2030 in Germany alone. The same will happen for truck emissions in Europe, going from 200 Mt CO2 to 217 Mt CO2 in 2025 and 230 Mt CO2 in 2030.

Stef Cornelis added: “European truckmakers are the biggest in the world but they need to be careful. Electric truck markets are growing but Europe is already lagging behind. This two-faced approach from the European industry is a dangerous game. Before they know it, they will be playing catch up like their colleagues in the car sector.” 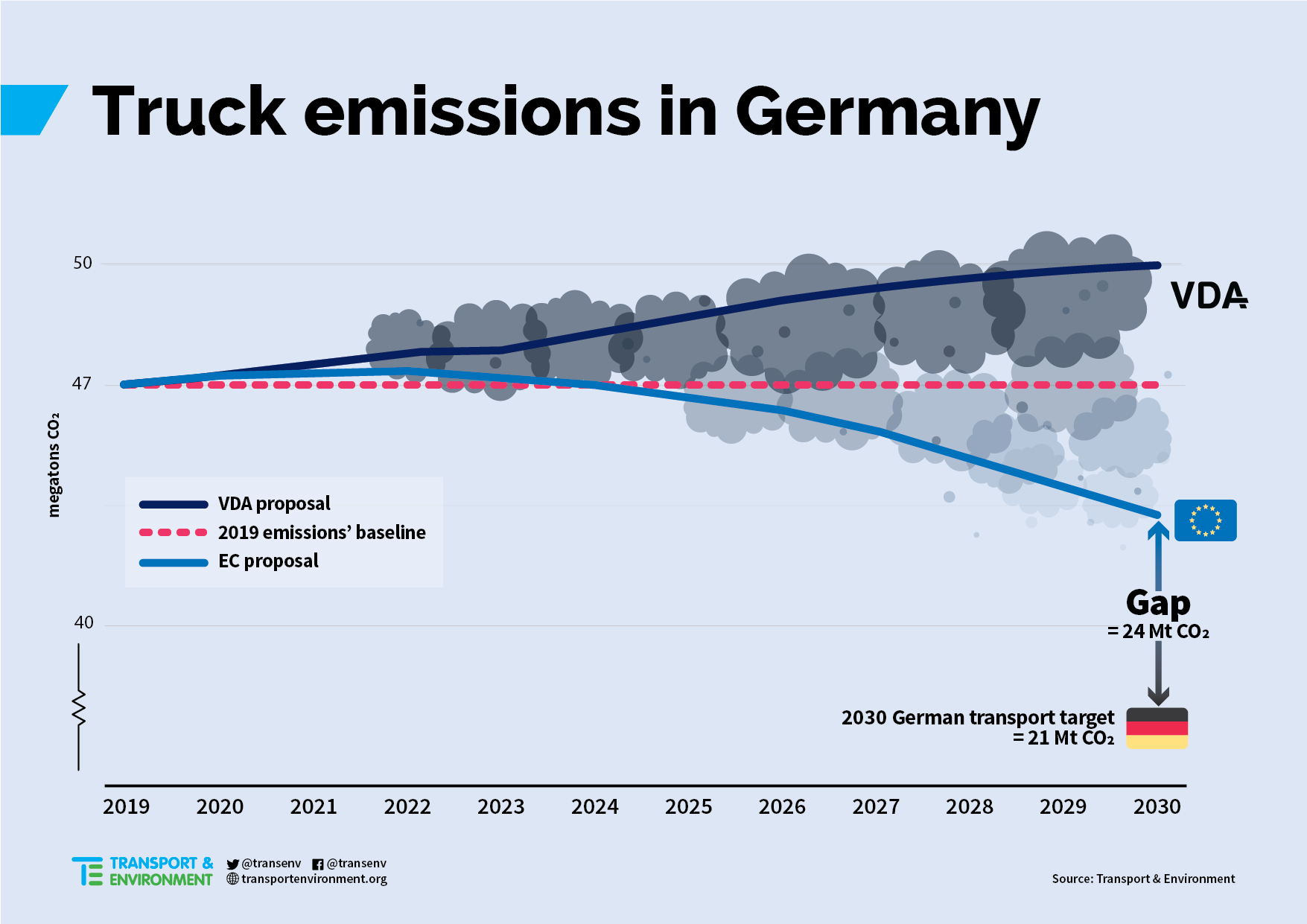 Transport is Europe’s biggest climate problem. Trucks make up less than 5% of the vehicles on the road but account for 22% of road transport emissions. While the US, Japan, China and Canada have CO2 limits in place, the fuel efficiency of trucks in Europe has little advanced over the past 20 years as EU truckmakers engaged in a price fixing cartel. ​