Government ministers are in the process of carving out €20 billion worth of exemptions for the shipping industry in the new maritime carbon market (ETS), according to a new analysis. Transport & (T&E), who carried out the report, calls on governments to put the polluter pays principle first and end unwarranted giveaways to an industry with a poor environmental record.

Last year, the European Commission announced the landmark decision to bring shipping into the EU’s carbon market. The proposal is now in the trilogue phase where national governments thrash out the final details of the proposal with the Commission and European Parliament.

Governments want to gradually phase-in (when the carbon market fully kicks in) the ETS, whereas the EU Parliament proposed to start the scheme in 2023 without a phase-in. If scrapped, as per the Parliament proposal, emissions coverage would increase by 154 MtCO2 over seven years.

Jacob Armstrong, sustainable shipping officer at T&E, said: “The ETS is a landmark opportunity to tax pollution from vessels and use that money to fund shipping’s decarbonisation. A delayed phase-in of the carbon market for shipping instead risks handing a large, unwarranted subsidy to big business.”

In the European Commission’s original proposal, all ships under 5000 gross tonnage (GT) are exempt despite sizeable emissions coming from these ships. Heavily emitting ships serving offshore oil and gas facilities are also excluded. The proposal only covers carbon dioxide, letting methane leaked from LNG ships off the hook[1]. 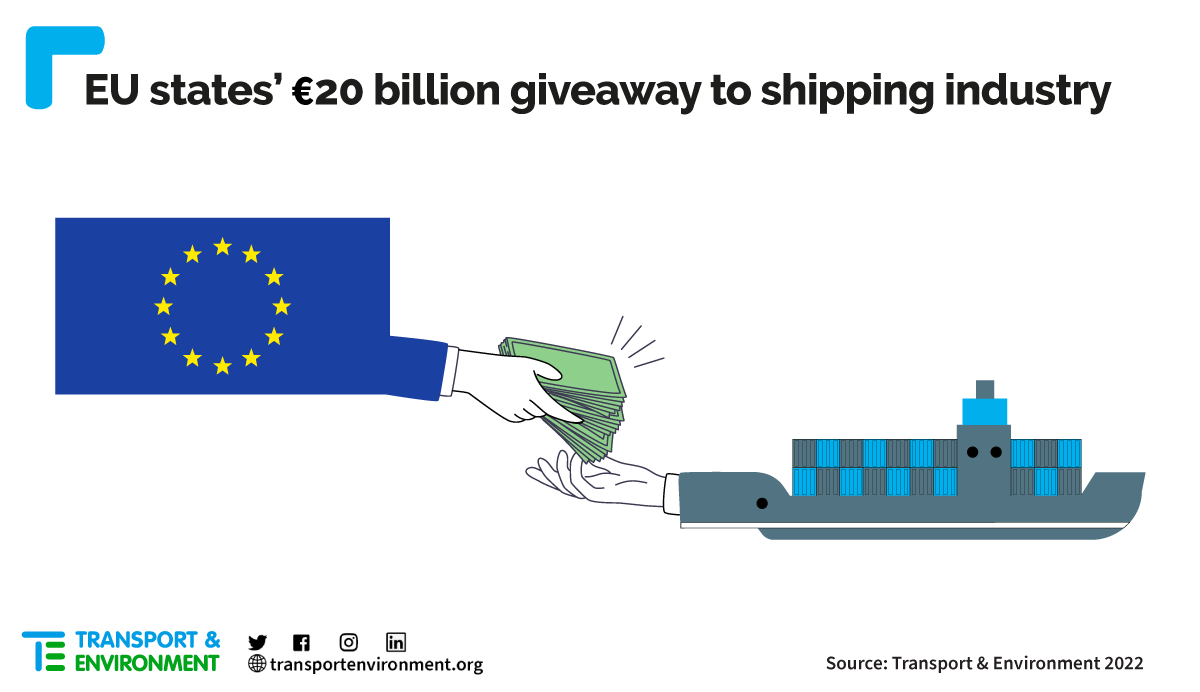 The European Parliament removed most of the exemptions from the Commission’s proposal before the summer break, however, EU member states have put forward a much less ambitious proposal. Spain and Greece, for example, are seeking exemptions for ferries to islands, while Finland wants to exempt ice-going ships.

Jacob Armstrong concluded: “National interests are making a mockery of the polluter pays principle. Ferries are easy to electrify while offshore oil and gas servicing ships are heavy polluters.They should not be exempted. Introducing a carbon market for shipping is a major step forward, but for it to work effectively countries cannot pick and choose which emissions are worth pricing.”

The Council’s position – which reflects those of national governments – gives a total of €20 billion worth of additional exemptions between 2023 and 2030 compared to the EU executive body’s landmark proposal in 2021. The European Parliament’s position, on the other hand, would increase revenues by €43 billion, as T&E’s analysis shows. T&E recommends that the EU adopts the most ambitious carbon market possible and uses the funds to support the deployment of green shipping fuels, such as hydrogen, in this decade [2].

[1] While ships running on liquefied natural gas (LNG) emit less carbon dioxide (CO2) than traditional fuel oil, they are not zero-emissions and emit significant amounts of methane, which warms the atmosphere 80 times more than CO2 in the short term. See T&E’s previous investigation.

[2] T&E’s analysis shows that channeling revenues from the shipping ETS into Contracts for Difference (CfDs) – subsidies to run ships on green fuel at the same cost as conventional fuel – could green the transport of 9 million containers.