Skip to content
Soy cultivation is a major cause of deforestation in the Amazon and other critical ecosystems in Latin America, and biofuel made from soy is twice as harmful to the climate as fossil diesel.[1] But soy diesel looks set to become a major source of biofuel, replacing palm oil diesel in European cars and trucks – unless the EU declares it unsustainable like it did for palm, Transport & Environment (T&E) said.
Europe’s thirst for soy diesel could increase 2 to 4 times by 2030 compared to what we use today, the report finds, causing deforestation of an area greater than the size of London in tropical forests and wetlands.[2] This is because EU law requires oil companies to mix supposedly ‘sustainable’ biofuels with fossil fuel to make cars cleaner – and palm has finally been labelled unsustainable.

Cristina Mestre, biofuels manager at T&E, which commissioned the study, said: “Soy imports will cause deforestation on an epic scale if we don’t change the EU’s green fuels law. But there’s a very simple fix. The European Commission has already decided palm diesel will no longer count as green and now they should do the same for soy diesel. Otherwise soy risks burning a big hole in Europe’s climate plans.” 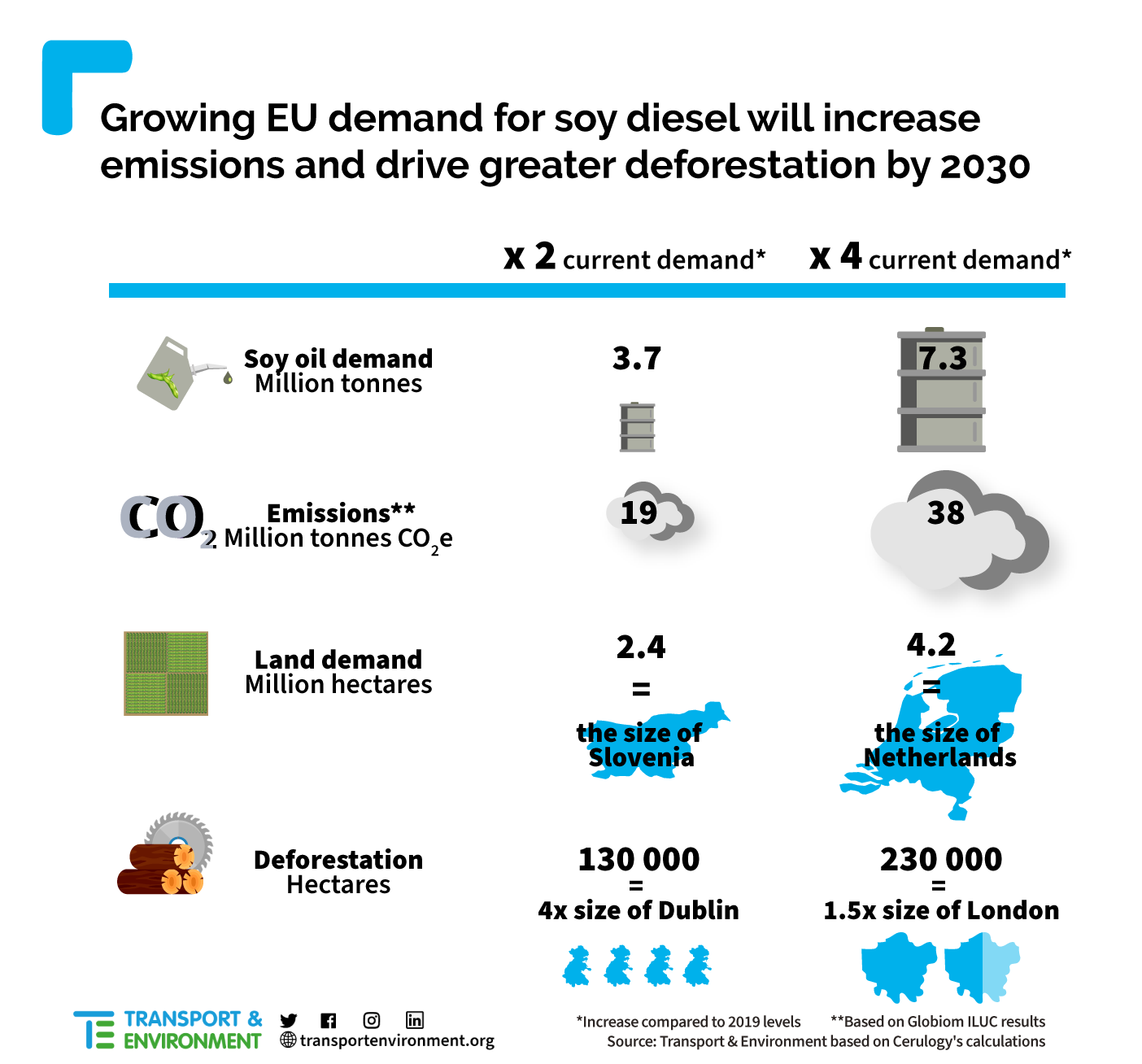 Over one-tenth of recent soy expansion may have led to the destruction of forests and other carbon sinks, the study estimates. This is higher than previously thought and exceeds the threshold beyond which the Commission considers a biofuel crop unsustainable.

Up to 38 million tonnes of additional CO2 could be emitted by 2030 if no regulatory action is taken in Europe, the analysis also finds. While the Commission has decided to phase out the use of palm diesel only between 2023 and 2030, France and Italy have signalled they will end support for palm and soy diesel sooner.[3] T&E called on the EU to drop its support for soy no later than its phase out of destructive palm diesel.

Cristina Mestre concluded: “Europe’s biofuels policy is a complete disaster and is in dire need of a reset. Burning food crops to power our vehicles is actually worse than burning diesel. Cars and trucks can already run on clean electricity, and planes and ships will too through green hydrogen and efuels.”

[1] According to a study for the European Commission, biodiesel from soy oil is two times worse for the climate than regular diesel when indirect emissions are accounted for.

[2] The study estimates deforestation based on the estimated expansion of soy cultivation into high-carbon stock areas and the assumption that part of this demand will be met by other means, such as crop yield increases.

[3] French MPs voted to end tax incentives for the production of palm and soy-based biodiesel. The measure still needs to clear the Senate, and the date of entry into force has yet to be decided.

In Italy MPs voted to stop support for palm and soy biodiesel from 2023. The bill now goes to the Senate to decide, and parliamentarians may yet bring the ban forward to 2021.

Study and briefing: Is soy the new palm oil?