The economists’ proposal comes ahead of EU leaders meeting tomorrow to discuss the future EU budget, which has a €12 billion-a-year gap as a result of the UK’s departure. T&E’s new analysis finds that even a portion of the income from new measures such as a carbon tax on motor fuels, aviation kerosene duty, and ending the VAT exemption for flights within and from Europe would address the deficit. But the bulk of the additional revenue would go to member states – enabling them to, for example, reduce labour taxes.

Samuel Kenny, freight policy officer at Transport & Environment, said: “The EU has long considered energy taxes as a way to cut Europe’s emissions. Now, with a budget gap looming and some of Europe’s top economists backing the idea, the logic behind a green tax shift to transport, the biggest source of climate emissions in Europe, is more compelling than ever.” 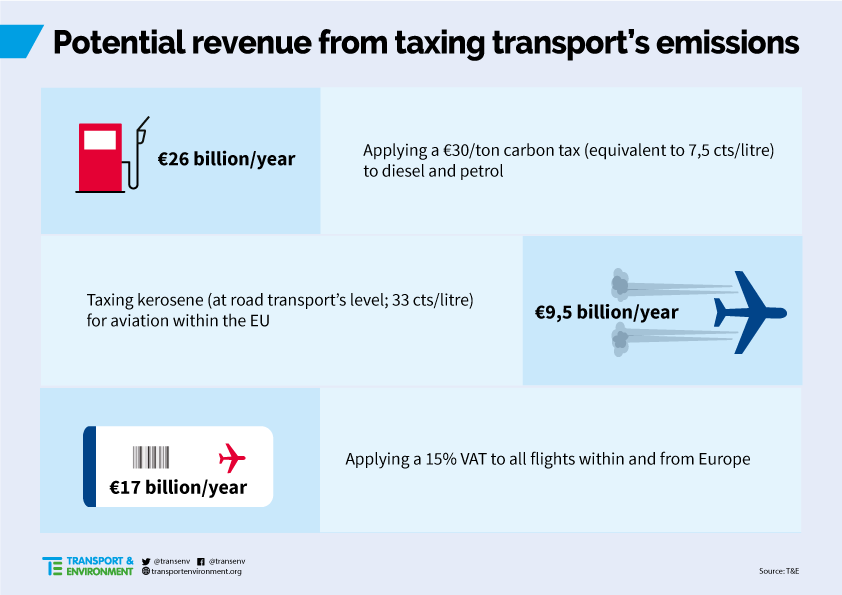 Transport is currently significantly undertaxed with aviation, in particular, enjoying exemptions on both fuel tax and VAT for airline tickets. Diesel is also taxed at a lower rate than petrol in most EU countries. Meanwhile, transport accounts for 27% of the EU’s greenhouse gas emissions.

Samuel Kenny concluded: “Taxing airline fuel and flight tickets makes sense. Aviation is the quickest and cheapest way to heat the planet while at the same time the transport mode most heavily subsidised by governments. Plugging these tax gaps can both accelerate the fight against climate change and solve the EU’s budget problems in one fell swoop.”