In 2030 Europe’s shipping industry will need over 6.3 million metric tonnes of LNG to power its growing fleet of gas-powered ships – enough to power 7 millions homes – a new Transport & Environment (T&E) study shows. This will only increase Europe’s dependence on fossil fuels, says T&E, which has labelled the switch to LNG as irresponsible in times of energy crisis. 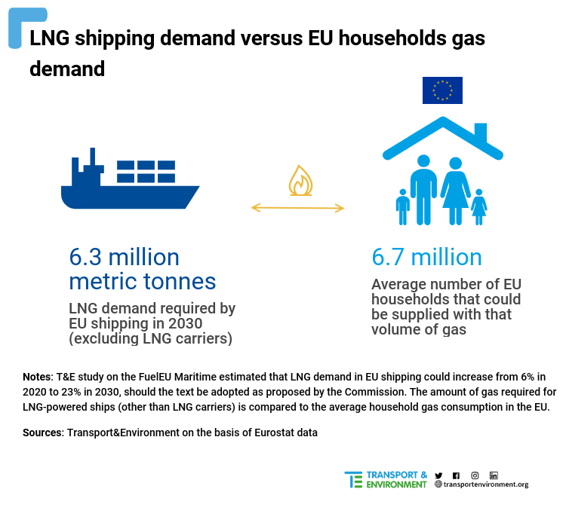 Constance Dijkstra, LNG campaigner at T&E, said: “As families across Europe struggle to pay their energy bills, the shipping industry is looking for new ways to burn gas. By 2030 nearly a quarter of Europe’s shipping could be running on LNG at a time where we should be reducing our reliance on fossil fuels. This cannot be allowed to happen.”

Shipping is a huge source of carbon emissions, responsible for roughly the same amount of global emissions as flying. The shipping industry and many European politicians are pushing for liquified natural gas (LNG) as a ‘clean’ alternative to traditional fuels. However, roughly 80% of Europe’s LNG used by ships today is worse for the climate than the fuels it replaces due to the release of the potent gas methane.

But, as T&E’s study shows, Europe’s policymakers should also be worried about the impact the switch to LNG-powered shipping will have on energy security. T&E’s analysis shows that over 200,000 households could be supplied with the gas required to power today’s fleet of LNG-powered ships. With LNG set to power a quarter of EU shipping’s energy needs in 2030, the number of households could rise to 7 million – enough to heat all the homes in Belgium or Sweden.

Preventing the uptake of gas in shipping must happen now, says T&E, before all segments of the maritime industry fall into the gas trap. Today, tankers carrying LNG represent the biggest share of LNG-powered vessels, but other types of ships are being tempted by the gas option. In 2018, only seven LNG container ships were built. That number has more than doubled in 2022 with 171 LNG container ships on order around the world today.

Constance Dijkstra concluded: “With gas supplies so tight and prices so high, there’s simply no justification for shipping companies to switch to gas. It isn’t even good for the climate. The EU should ditch plans to promote fossil gas in shipping and promote green hydrogen-based fuels instead.”

The EU is at a crucial point and can raise the climate ambition of the EU’s FuelEU Maritime proposal – the EU’s main alternative fuels law for shipping. Stricter greenhouse gas intensity reduction targets from 2035 onwards would shorten the compliance lifetime of fossil LNG powered ships, as proposed by the European Parliament on 19 October. Europe’s lawmakers have also voted in favour of a 2% mandate for green hydrogen-based fuels – the first of its kind. T&E calls on the EU bodies to put these proposals into law to start the belated decarbonisation of Europe’s shipping industry.

[1] At the time of publication, 29 LNG cruise ships and 171 containerships are on order around the world.