The study estimates that there will be a corresponding increase in gross domestic product (GDP) of 0.2% a year, with European oil imports slashed by €49 billion in 2030 [2]. By then purchase costs of plug-in vehicles will be similar to oil-powered cars but total costs of ownership will be much lower, indicating the shift is good for drivers as well as the economy and the environment.

At the launch event in the European Parliament today European Commission Vice President, Energy Union, Maroš Šefčovič commented: “The drive for batteries will be worth €250bn a year by 2025. Other parts of the world are moving; we need to make sure the EU leads on clean mobility.”

William Todts, executive director of Transport & Environment, said: “This study proves definitively that low-carbon cars are good for drivers, the European economy, our health and the environment, but that zero-carbon cars are even better. Vice President Šefčovič is right to say that citizens’ patience with bad air quality is running out. We need to seize the opportunity that electromobility offers in order to clean up the air in our cities and avoid becoming dependent on the auto technologies produced in other regions of the world.” 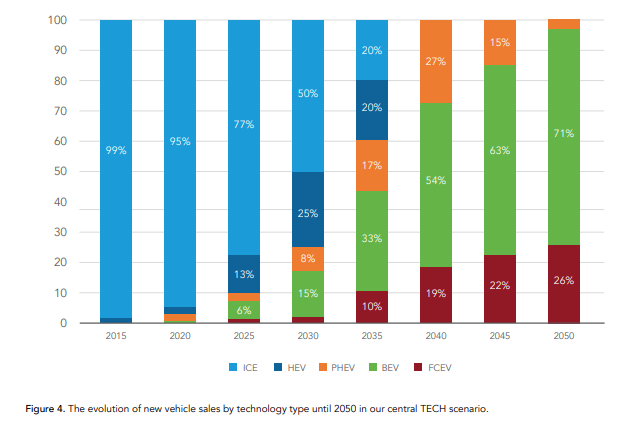 The Cambridge Econometrics analysis also highlights that if electric cars are charged smartly, when there is plentiful electricity, there will no be significant impact on electricity grids. By using the car battery to help balance renewable grids there is a net benefit and it is possible to add additional renewable generation to electricity grids cost-effectively.

According to one of the scenarios in the study [3], Europe would be on track to reduce CO2 emissions from cars by 88% by 2050. The associated technology improvements would cut toxic nitrogen oxides (NOx) from cars from around 1.3 million tonnes per year to around 70,000 tonnes per year, helping reduce air pollution which causes 467,000 premature deaths in Europe every year.

The study also investigated the effect of manufacturing battery cells in Europe or importing them from Asia. It found there were still benefits to the European economy from a shift to electromobility, albeit smaller, even if cells are imported. However, manufacturing in Europe is considered probable so long as the cars are also made here.

William Todts added: “The risk to the European economy is that we get left behind by failing to sell and use electric cars. The Chinese have created a world-leading domestic market and with that helped build the biggest electric vehicle manufacturing industry in the world. China has recently attracted lots of investments, including from European automakers. Europe needs to catch up quickly to drive investment here. If we fail to do so, it will be Chinese-built electric cars driving on Europe’s roads in a few years.”