As the CO2 standards are currently being discussed by co-legislators in the European Parliament and the Member States, T&E has analysed the current van market and the economics of electric vans, showing that the market and van users are ready for this transformation. Download T&E’s study for the full analysis, or read the factsheet containing the findings for six key countries

Vans have so far kept on the slow lane to electrification. Vans are the road transport mode with the fastest growing emissions: +63% in 2019 compared to 1990, and are responsible for 11% of oil demand from road transport. While the 2020/21 light-duty CO2 standards have propelled sales of battery-electric cars from 2% in 2019 to 9% in 2021, the e-van market lags behind at 3% in 2021 due to much weaker standards. The ongoing revision of the van CO2 standards as part of the EU’s climate package represents the key opportunity to accelerate this transition and align vans with the EU Green Deal ambition. Moveover, in the light of the ongoing war in Ukraine and given that EU vans consume 210 million barrels of oil every year, reducing EU oil dependence and accelerating the transition to electric vans is now more urgent than ever.

Electric vans are already the cheapest option for all

The vast majority of new vans are registered by commercial users, who make vehicle purchase decisions based on total cost of ownership (TCO) including vehicle purchase, running and maintenance costs. It follows that if and when electric vans become cheaper than diesel vans on a TCO basis, van buyers would switch to electric vans instead of diesel vans, provided they do not face major operational constraints.

In order to assess TCO parity, T&E has modelled the TCO of diesel and electric vans for six groups of end-users (business-to-consumer and business-to-business transporters, vocational users, short-term rental services, lessees, and private users) in six countries (France, Germany, Italy, Poland, Spain, UK), making up 76% of the EU+UK van market. Inputs for van use by user group are derived from a separate survey by Dataforce.

This analysis finds that electric vans are already the cheapest option for all user groups considered in all six countries when purchase subsidies are included. The average EU electric van is 25% cheaper than the average diesel van (0.15€/km for the e-van versus 0.20 €/km for the diesel van). Even if purchase subsidies are excluded, electric vans are already cheaper on a TCO basis in five out of the six countries considered (and are cheaper in all countries and for all user groups by 2024 at the latest). 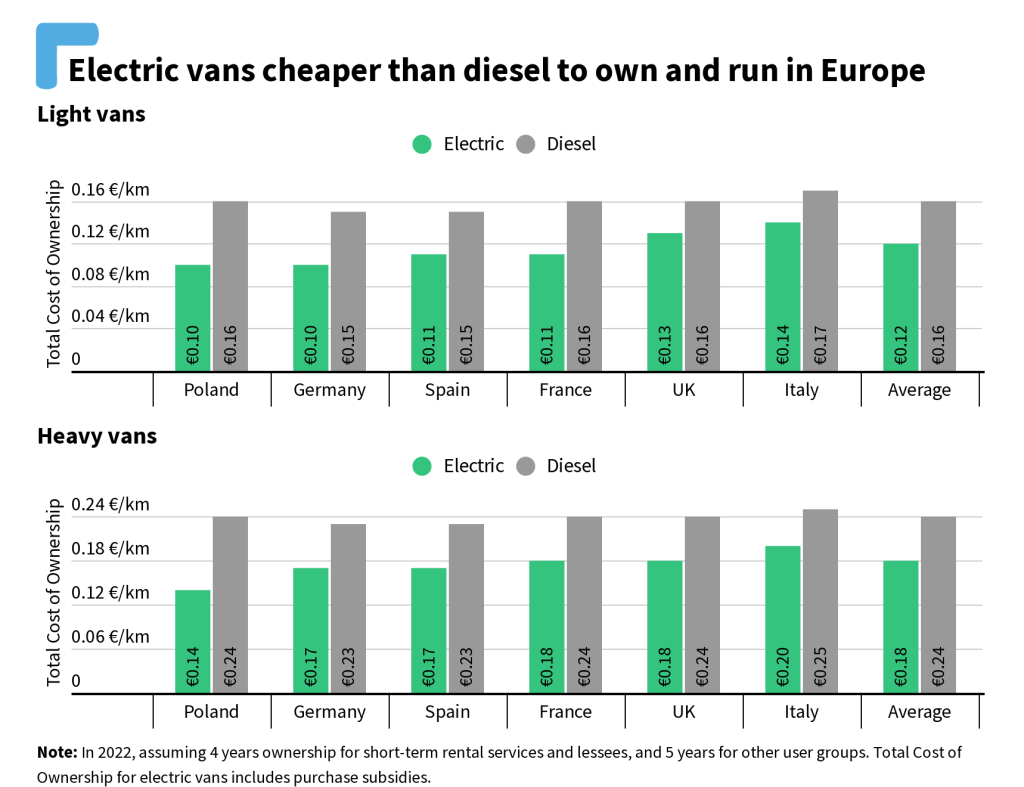 In December 2021, T&E commissioned Dataforce to conduct a survey of van fleets in all six countries considered here in order to understand their attitudes towards electric vans. Out of 745 users surveyed, 84% of survey respondents said they considered going electric: just over one third already have at least one e-van in their fleet (36%), another one third plan to buy an e-van in 2022 (32%) and 16% consider buying one in the next 5 years. The survey shows that e-van adoption is strongest in Italy with 91% and lowest in Germany with 62%.

Respondents were also asked about their purchase behaviour in order to identify the main drivers for, and barriers to, e-van adoption. Findings show respondents who buy electric vans primarily do so for environmental and economic reasons, while respondents who have not purchased electric vans justify their decision based on operational constraints, such as range. 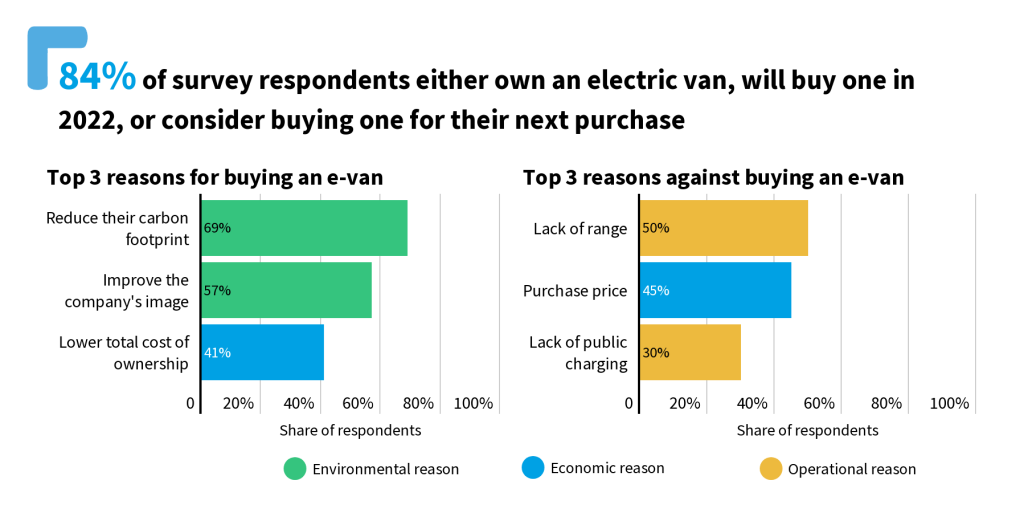 An increasing offer of electric vans

In 2022, e-van buyers can pick from 43 models (19 light van models and 24 heavy van models), more than doubling from 18 models in total in 2019. Eight additional new e-van models have been announced to hit the market by 2025. In 2021 the average light e-van could drive 192 km on a single charge in real driving conditions (up to 255 km for longer range models), while a heavy electric van had a real range of 133 km (up to 154 km for longer range models). New models coming on the market in 2022 advertise higher official ranges (293 km for light e-vans and 263 km for heavy e-vans on average), showing range limitations are quickly being addressed.

Regarding average purchase price, a light e-van on the market today costs 34,400€, while a heavy e-van costs 52,900€. Although these e-van models cost around 40%–55% more than equivalent diesel models, these higher upfront costs are more than compensated for by the lower operating costs.

The EU van market is ready to go electric, but at what speed?

The vast majority of van users are willing to make the switch to greener and cheaper electric vans, showing that e-vans are already a strong and credible proposition. Based on economics alone, the cost-optimal trajectory would lead to 100% electric van sales already in 2025—when e-vans are cheaper to own across the board, even when owned for less than four years. However, because of operational and industrial challenges, as well as a lack of political will, a more realistic e-van adoption trajectory would be in line with the adoption modelled by BNEF: 17% e-vans in 2025, 36% in 2027 and 73% in 2030. 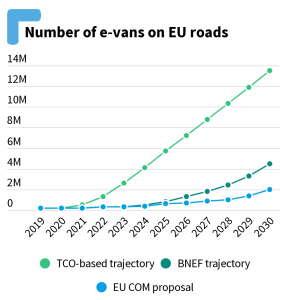 T&E calculates that the higher targets would save 1.4 MtCO2 in 2025 and 5.6 MtCO2 in 2027. Annual emission savings would rise to 12.8 MtCO2 in 2030—equivalent to the emissions from all German and Slovakian vans in 2019. It would also bring 4.5 million electric vans to the roads in 2030, versus only 2 million under the European Commission proposal. In addition, it would reduce oil demand from vans by 7% in 2027 and by 17% in 2030. It would also improve air quality and reduce health problems associated with air pollution, especially in cities where vans are often one of the largest contributors.

On the contrary, adopting the Commission proposal instead of the T&E targets would deny EU van users 13.1 billion euros in cost savings in 2025–2030. As a consequence, van users and the EU as a whole would miss out on numerous economic, environmental and health benefits by leaving the potential of electric vans unmet and letting vanmakers continue to sell outdated diesel technology. 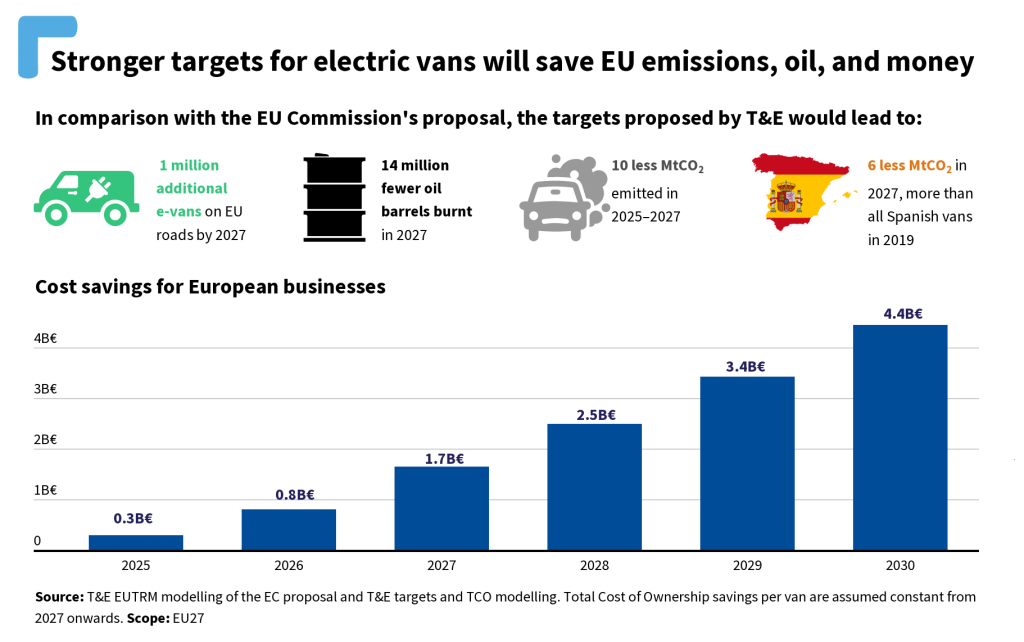 In spite of e-vans being already the best choice from a TCO perspective, only 3% of vans registered in the EU in 2021 were battery-electric. This is chiefly because current van CO2 targets are too weak to drive sufficient supply of e-vans.

For cars, manufacturers delayed supplying EVs until they were required by the car CO2 standards to clean up their sales. In the meantime, carmakers promoted sales of profitable polluting SUVs. Similarly, without stronger targets in the 2020s, vanmakers are likely to hold up the electric transition until after 2030 when the CO2 emissions standards are stringent enough to require them to sell zero-emission vans. Under the van CO2 targets proposed by the European Commission, the targets in the 2020s would remain untouched (-15% from 2025 to 2029), meaning that zero-emission vans could remain well below 10% of new sales as late as 2029. This would be in spite of van buyers being economically better off purchasing electric vans.

T&E recommendations for the review of the van CO2 standards

Given the need to reduce climate emissions, oil use, and health impacts—and enable van users to reap major economic benefits—T&E urges the co-legislators from the European Parliament and Member States to deliver stronger CO2 emission targets to accelerate the uptake of e-vans in the 2020 and early 2030s. The legislative reforms needed to deliver more e-vans are clear (see T&E position paper for more detail):

These asks are supported by many stakeholders. In a letter published in March 2022, cities, hauliers, companies, health and environmental organisations, and civil society call on MEPs and Member States to increase the ambition of the CO2 targets in the 2020s and set 100% zero-emission van sales in 2035 into law.

Vans are often the neglected area of EU road transport policy despite their disproportionate impact, especially in urban areas. The EU can address the current van legislative loophole, and deliver on the many benefits of electrification by making vans a priority in the current review of the cars and vans CO2 emission standards.