According to the European Transport Safety Council, lorries are involved in around 4,200 fatal accidents in Europe every year. Many of these fatalities, almost 1,000 [3], are vulnerable road users such as cyclists and pedestrians. In countries with high rates of cycling, lorries are often the single biggest threat to cyclists: In Belgium, 43% of cycling fatalities involve lorries, in Holland 38% and in the UK 33%. In some cities, like London, lorries cause more than 50% of cyclist deaths. 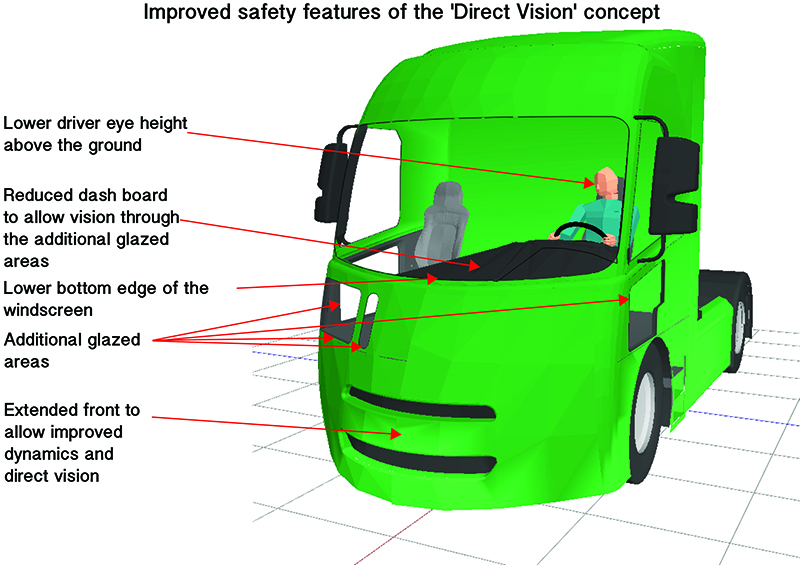 Outdated, brick-shaped lorry cabs are part of the reason why lorries have a deadly track record. Today’s cab design forces the driver to sit on top of the engine in such a high position that much of what happens around the cab is invisible to them – the so-called fatal blind spots.
Dr. Steve Summerskill, project lead of ‘Direct Vision’ concept for Loughborough Design School, said: “Blind spots can be a significant factor in fatal accidents with lorries. The study shows that the size of these blind spots can be minimised through improved cab design, the reduction of cab height and the addition of extra windows.”
There are two legal roadblocks holding back safer, more fuel-efficient lorries.
Firstly, unlike for cars, Europe has no rules guiding what a lorry driver should be able to see with his own eyes (direct vision). Instead European rules focus on indirect vision, i.e. through mirrors, but while these are useful, the multitude of mirrors and their often distorted images are no substitute for decent direct vision. 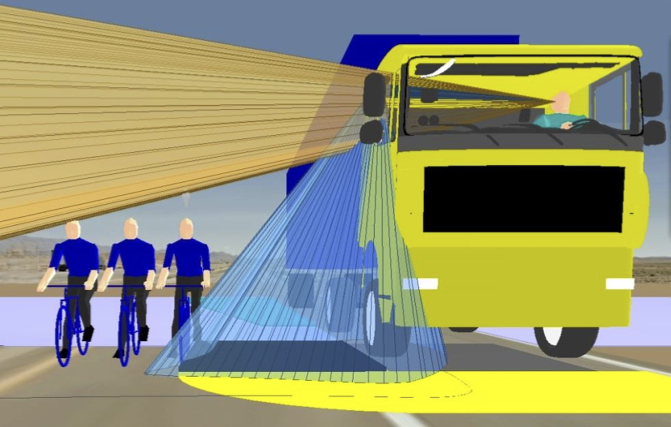 Secondly, the current EU law on weight and dimensions of lorries has forced a design that has particularly large blind spots. Europe has proposed changing this law to allow (but not mandate) slightly longer (80-90cm), more aerodynamic lorry designs. New designs would need to comply with additional safety requirements but these still need to be developed.

William Todts, senior policy officer of T&E, said: “Not only drivers, but politicians too need vision. It’s incomprehensible that we allow huge 40ton mammoths on our roads without making sure the people behind the wheel actually see what’s going on. After decades of tinkering with mirrors, we need to take this once-in-a-generation opportunity and make direct vision compulsory for new lorry designs.”
Leon Daniels, managing director of surface transport at Transport for London (TfL), said: “We are committed to improving road safety for everyone. Through the funding of innovative studies it has been demonstrated to Europe how the vehicle manufacturing industry can continue to improve their safety standards.

COLLAGE of Concept and DAF view of cyclists_revised.jpg

“Freight is integral to the economy of Europe, but it needs to operate in the safest manner possible. Improved and increased direct vision will benefit all. Safety will be improved, efficiencies will be made and lives will be saved,” Daniels concluded.