Skip to content
Even a diesel car that passed the EU’s new on-road test emits nine times the legal amount of nitrogen oxides (NOx) when driven in a way more representative of typical driving, new testing shows. NGO Transport & Environment (T&E), which authored the report, said it shows combustion engines – including those which passed the official Real-Driving Emissions test – are not clean and will continue to pollute in the foreseeable future.
The number of grossly-polluting diesel cars and vans on our roads has increased by 5 million since last year and is up 14 million on when the Dieselgate cheating was exposed on this day three years ago. There are 8.7 million dirty diesels in France; 8.2 million in Germany; 7.3 million in the UK; and 5.3 million in Italy. Many of these cars are now being exported eastwards and ultimately will end up in Africa. T&E said that if Europe does not act, high emitting diesel cars will be polluting the air of cities around the world for decades to come. 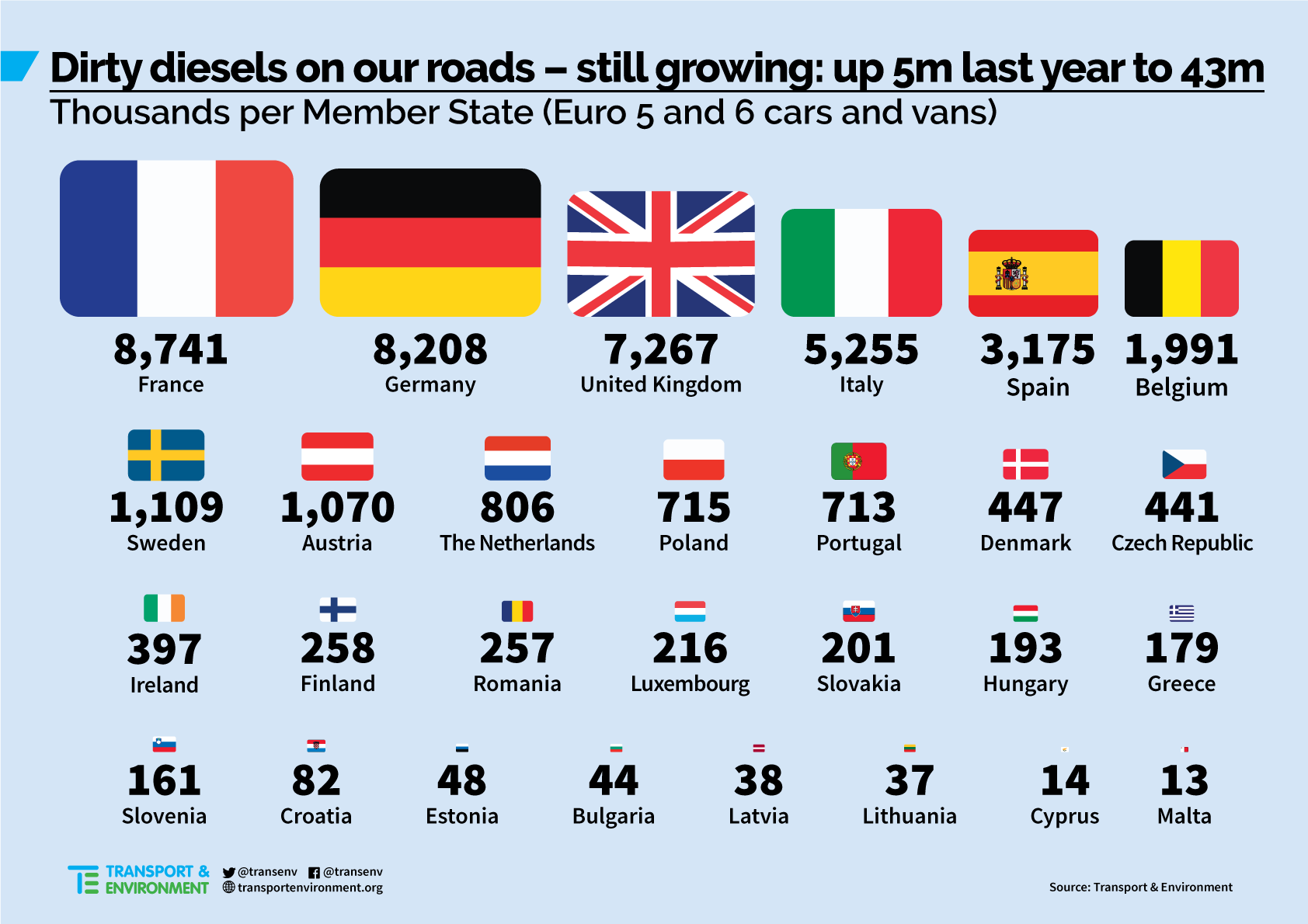 Florent Grelier, clean vehicles engineer at T&E, said: “After three years, it is shocking that the number of dirty diesel cars and vans on the road today is still rising. The EU needs to take action to clean up the 43 million grossly polluting vehicles and prevent their sale or use until they are properly fixed. If not, these grossly polluting cars will continue damaging citizens’ health for decades to come.”

The latest testing by T&E finds the newest Euro 6 cars are designed to pass the regulatory on-road test but can emit well over the legal limit when driven on roads with hills, with more typical accelerations, and at faster speeds that are more representative of the ways cars are typically driven. NOx emissions from a 2018 diesel Honda Civic met legal limits during an official test but emissions increased 9-fold when driven in a way not captured by the EU’s new real-driving test. T&E said the result demonstrates serious flaws in the newly introduced RDE test and its ability to ensure low emissions from cars in the real world.

Similarly a petrol Ford Fiesta had particulate emissions more than twice the limit when driven in a more comprehensive way. Contrary to industry claims, the results show even new cars will produce much more pollution in the hands of drivers than when tested by engineers. 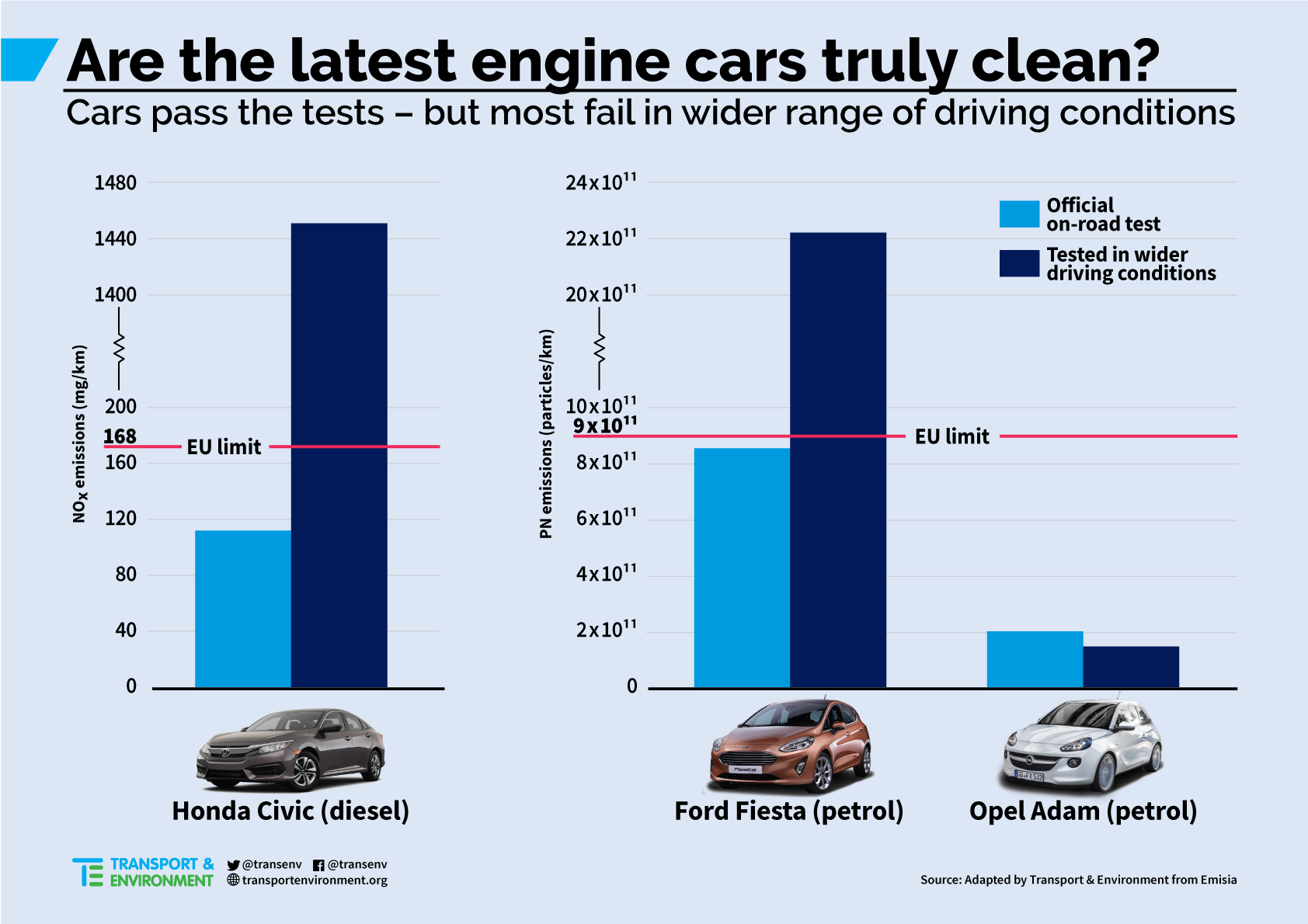 The report also highlights the emerging health concerns about a range of unregulated pollutants including the carcinogens benzene, carbonyl compounds and Polycyclic Aromatic Hydrocarbons (PAH).

Florent Grelier concluded: “The data show that cars with internal combustion engines were not clean in the past, are not clean today, and will not be clean in the foreseeable future. The car industry will always find new ways to circumvent tests and optimise results. The only way to ensure cars are truly clean is to accelerate the shift to zero-emission technology and electromobility.”

In October the European Parliament and member states will finalise their amendments to the Commission proposal for limits on new car and van CO2 emissions in 2025 and 2030. At the heart of this battle is the extent to which Europe should persist with selling engine cars or switch to electric and hydrogen alternatives.

T&E’s report: Cars with engines – can they ever be clean?