The group proposes a deal whereby fossil-fuel private jets are banned from 2030 and, until then, taxes are levied on private aircraft with the revenues used to clean up the entire aviation industry and make it fit for the future.

Despite their disproportionate climate impact, private jets are untaxed in most European nations because of exemptions from the EU’s carbon pricing scheme (EU ETS) and untaxed kerosene. Yet the private flight sector was the first branch of aviation to recover from the first wave of the Covid-19 pandemic, and has prospered while commercial aviation has been slow to recover.

T&E’s research shows that CO2 emissions from private jets in Europe increased by nearly a third (31%) between 2005 and 2019, faster than commercial aircraft. Private jets are 10 times more carbon intensive than airliners on average, and 50 times more polluting than trains. By August 2020, while most Europeans were still grounded and commercial flights were down 60% year-on-year, private jet traffic had returned to pre-Covid levels, with one operator reporting an 11.3% increase in private flight sales in July 2020 alone. Private jet owners have an average wealth of €1.3 billion. 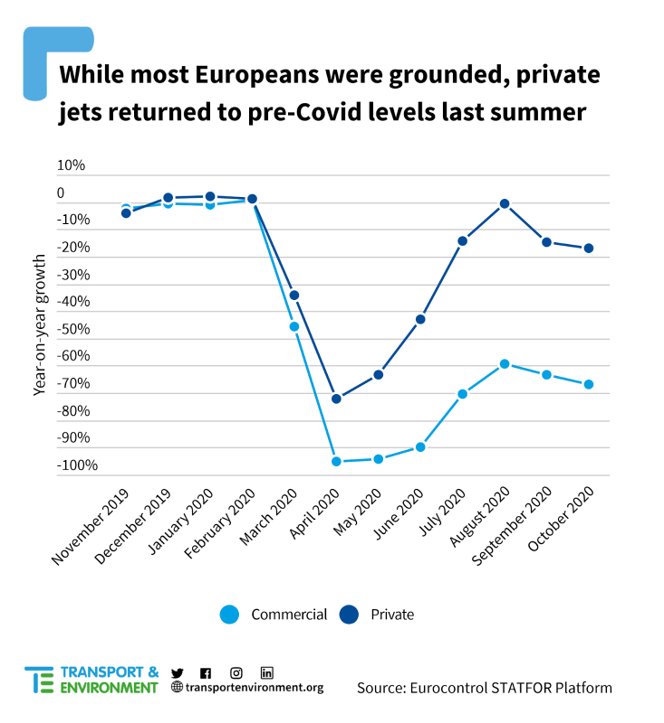 T&E’s aviation director Andrew Murphy said: “Flying on a private jet is probably the worst thing you can do for the environment, and yet super-rich super polluters are flying around like there’s no climate crisis. But because most of the distances that attract private flights are distances ideally suited to the first generation of low-emission aircraft, private flying can be used constructively to clean up the sector”

Hence the title of T&E’s report Private jets: can the super-rich supercharge zero emission aviation? It calculates that a jet fuel tax applied proportionately to flight distances could raise €325 million if applied to all private flights departing from the EU and UK. If some of that money could be reserved for making green hydrogen and electric planes a reality, then the richest flyers would be indirectly paying towards cleaning up aviation.

Murphy added: “This could be aviation’s Tesla moment. The short hops favoured by users of private jets are prime targets for replacement by clean technologies like electric and hydrogen aircraft. European policymakers need to urgently start taxing fossil-fuel powered private jets and ban their use by 2030. Some of the revenue raised from the private flyers could then be invested in greener technology that could clean up flying for everyone.”

The report makes three recommendations: only green hydrogen and electric aircraft should be allowed for private jet flights under 1,000km by 2030; until 2030 all private jets should be taxed based on flight distance and aircraft weight; and in the long term private flights should be prohibited when alternatives exist that do not increase travel time by more than two and a half hours.

The report also reveals that a four-hour private flight emits as much as the average person does in a year. Within Europe, seven of the 10 most polluting routes taken by private aircraft lie on the UK-France-Switzerland-Italy axis. 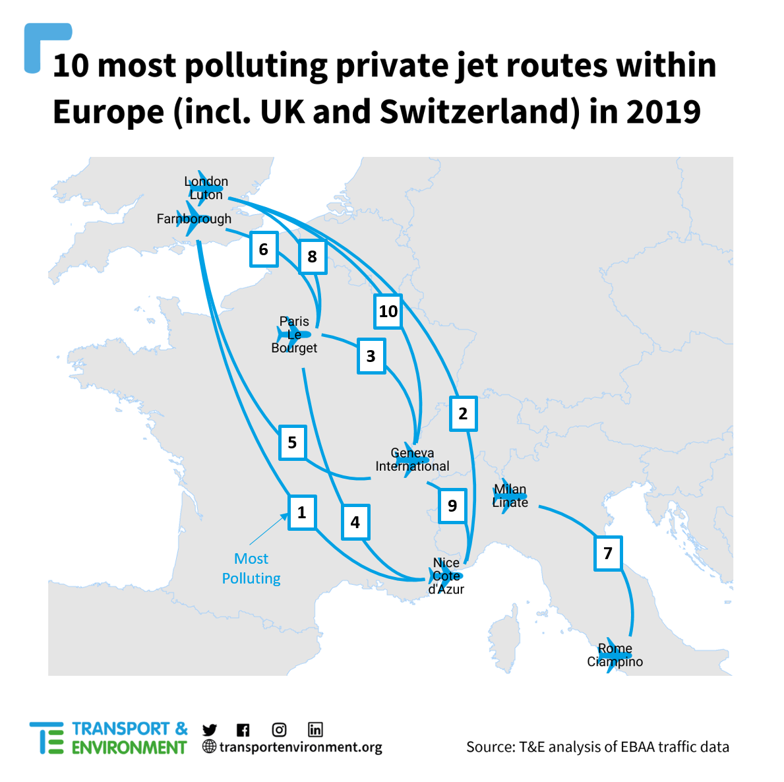 The UK and France are the biggest source of private jet pollution in Europe, with jets departing the two countries representing over a third (36%) of private flight emissions between them. One in 10 flights departing France are private jets, half of which travelled less than 500km. T&E said that France’s proposed ban on some short-haul commercial flights should also apply to private jets.