Today’s urban trucks have deadly blind spots. Currently there are no rules in place governing the amount of the road truck drivers must be able to see. However, research clearly shows that trucks with low-entry cabs, which many European manufacturers already make, have excellent direct vision and prevent road fatalities.

The EU has the exclusive competence to mandate safety improvements for new cars, vans and trucks. The last new safety requirements date back to 2009 and the Commission continuously keeps postponing updating the rules.

Dr. Julius Menge of the Berlin’s Senate Department for Urban Development and the Environment, said: “We are implementing measures to boost road safety and enhance public health. But we need the EU to improve the design of vehicles to make them safer, especially trucks with deadly blind spots. That is why we urge the Commission to introduce a European direct vision standard for trucks most commonly used in urban areas, and ambitious direct vision requirements for other truck types.“

The letter also calls for the legislative reform to boost the deployment of advanced emergency braking systems (AEBS) and intelligent speed adaptation (ISA). (1)

James Nix, freight and climate director at NGO Transport & Environment, said: “London has taken the lead here by banning trucks with the worst visibility; Amsterdam, Berlin, Copenhagen and Dublin are among the many cities now examining a similar move. It’s up to the Commission to avoid a patchwork of different direct vision standards across Europe. Manufacturers should not have to make six different trucks for six different direct vision standards.“ 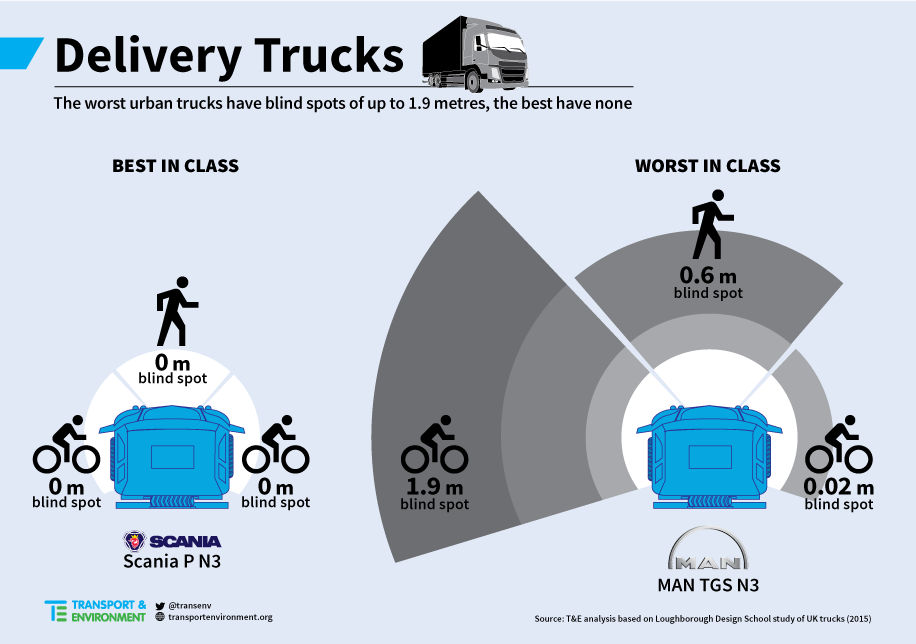 (1) Regarding direct vision, a differentiated approach is recommended in the letter, i.e. the standard would first be applied to urban delivery trucks, with construction and long-haul vehicles subject to longer phase-in periods. Earlier this year Internal Market Commissioner Elżbieta Bieńkowska said that a “differentiated approach may be justified for direct vision standards for trucks driven mostly on motorways, and for city delivery trucks more likely to affect pedestrians and cyclists“.