It now threatens the very effectiveness of the car CO2 regulation as it would weaken the stringency of the CO2 targets by 4.4 gCO2/km on average in 2021-2024, and 1.8 gCO2/km in 2025-2030. This is equivalent to selling an additional 3-4% points battery-electric cars before 2025 and an additional 1-2% points from 2025 to 2029. The expected average weakening up to 2030 is summarised below. In effect, this adjustment incentivises carmakers to produce heavier vehicles. It should be removed as part of the upcoming review.

Impact of the mass adjustment on target weakening 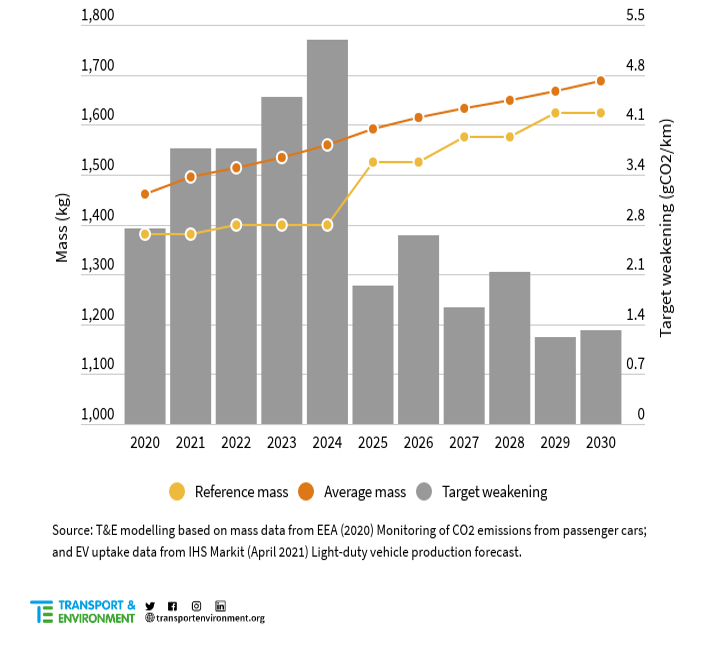 How it works: In the EU car CO2 emissions standards, CO2 emission targets are adjusted to average car mass, as for internal combustion engines (ICE) vehicles, larger and heavier cars were less efficient and emitted more, so they used to need help to meet targets (that is no longer true today). In the regulation, the target adjustment for “heavier” fleets is determined by comparing the average mass of a carmaker’s fleet to the average mass of cars on the EU market (the so-called reference mass M0). The EU reference mass is adjusted every 3 years until 2024 and every 2 years after 2025, and is the market average vehicle mass of cars sold 2 to 7 years earlier (see Table below). This means that the reference mass always lags behind the actual average mass of cars observed in the EU fleet by several years.

European cars are getting heavier: T&E modelled how the mass of the average European car will evolve in the next decade. The major driver affecting average vehicle mass is the increasing sales of heavier electric cars: BEVs are 23% heavier than ICEs, and PHEVs weigh around 2 tonnes, or 40% more than ICEs. According to IHS Markit’s forecast and industry announcements, BEVs and PHEVs will make up 27% and 12% respectively of the market in 2025, and 55% and 12% respectively in 2030. This will lead the mass of the average European car to increase from around 1,500kg this year to 1,700kg in 2030, i.e an average increase of 23 kg/year.* As a result, the average car will be 130 kg heavier than the reference mass M0 in 2021-2024, and 66 kg heavier than M0 in 2025-2030.

CO2 Target weakening: How does this translate into a weaker CO2 target? The difference between carmakers’ average vehicle mass and the reference mass is multiplied by a factor a to determine by how many gCO2/km the CO2 target should be relaxed. Based on the average car mass increase forecasted above, T&E shows that the CO2 target would be weakened for the EU fleet as a whole by 4.4 g/km on average between 2021 and 2024, and by 1.8 g/km between 2025 and 2030.

In 2020, carmakers with heavier fleets benefitted from important target weakening: instead of the official 95 gCO2/km target, BMW Group’s target was 103 gCO2/km, Daimler’s was 102 gCO2/km, and Ford-Volvo’s was 101 gCO2/km (ICCT analysis). T&E has shown that the overall EU fleet target as a whole was relaxed to 97 gCO2/km.

An unintended incentive to sell heavier cars and SUVs: As the mass-adjustment mechanism rewards heavy fleets with a weaker target, it has fuelled the continuous rise of SUVs observed in the last decade (from 4% in 2021, to 26% in 2016 and 39% in 2020). As a consequence, the average mass of cars sold is pushed upwards across the whole market.

The best solution to limit both the SUV trend and the weakening of the regulation would be to remove the mass adjustment of the carmakers’ CO2 targets (i.e. set a at zero). The European Parliament already requested this to be assessed back in 2018. Should the mass adjustment mechanism be kept in the regulation, electric vehicles should be excluded from the calculation of the reference mass, or at least the weight of their batteries should be subtracted.

*Table: How the reference mass is calculated

In these calculations T&E conservatively assumed that neither battery-electric nor plug-in hybrid cars gain weight over the next decade (average mass fixed at 2019 values). This supposes that improvements in battery density balance out the trend towards larger vehicles, SUVs in particular. Only ICE cars are assumed to get heavier, gaining 6 kg/year, which corresponds to their average annual gain between 2015 and 2019. EV uptake is based on IHS Markit European production forecast, adapted to take into account European imports and exports as well as voluntary electrification targets by carmakers.