Aviation has long had a special place in the human imagination. From Daedalus and Icarus to Da Vinci and Amelia Earhart, it has always been our dream to conquer the skies.

However, thanks to Greta Thunberg, Flygskam, or “flight shame”, aviation is losing its cherished status.

Now Airbus, the world’s largest aircraft manufacturer, has given kids something fresh to dream about: hydrogen aircraft. By 2035 the company claims it will have hydrogen aircraft in the sky, carrying 100-200 passengers over distances of 1,000-2,000 nautical miles – think Berlin to Lisbon or Warsaw to Madrid. As hydrogen aircraft give off no emissions, could this be the invention to cure us of our flygskam? Can Airbus make it fly?

Some people certainly seem to think so. French president Emmanuel Macron hailed the announcement as a great step. The European Commission promptly made getting large hydrogen aircraft in the sky by 2035 a European Union objective.

It would be easy for environmentalists to dismiss this as a distraction from the need to fly less. That would be a mistake. We can’t shame aviation emissions all the way to zero. More importantly, this may be a great opportunity to hold the world’s biggest aircraft manufacturer accountable.

Let’s start by trying to understand whether hydrogen air travel is at all possible. Both the US and Soviet Union experimented with hydrogen aircraft. There was the hydrogen powered B-57B in 1957 and a 1988 modified Tupolev Tu-154 airliner. ZeroAvia also completed the world’s first hydrogen-electric passenger plane flight in September 2020. So, technically speaking, hydrogen planes could fly.

There are some real challenges though. Hydrogen is light but takes up to four times as much space as jet fuel. That makes it hard to store sufficient energy on board to operate long distance – on transatlantic flights, for example. This matters. For example, a small plane carrying 100 passengers with a range of 1,000 miles would eliminate just 4% of EU aviation CO2 emissions. One capable of carrying 165 passengers a distance of 2,000 miles would cover 20% [1]. 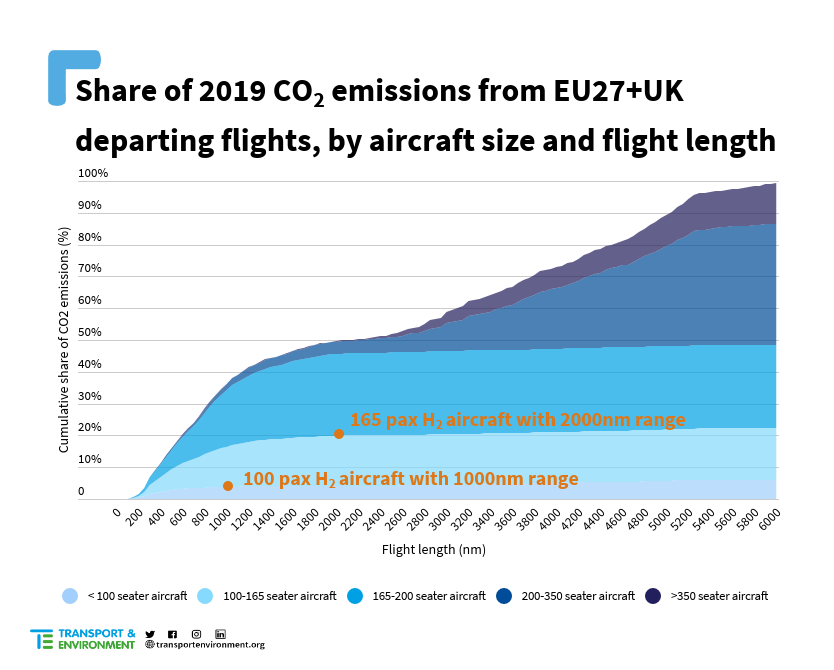 But the real challenge, as so often for hydrogen technologies, is cost. Plane designs would need to be adjusted; bulky hydrogen storage tanks added; and refueling and storage infrastructure created around airports. Fuel costs, which make up around 40% of aircraft operating costs, would also be higher. Our calculations show a 165 seater H2 aircraft would still cost 14% to 33% more than an aircraft running on conventional kerosene[2]. And that’s without counting any of the development or hydrogen supply chain costs. 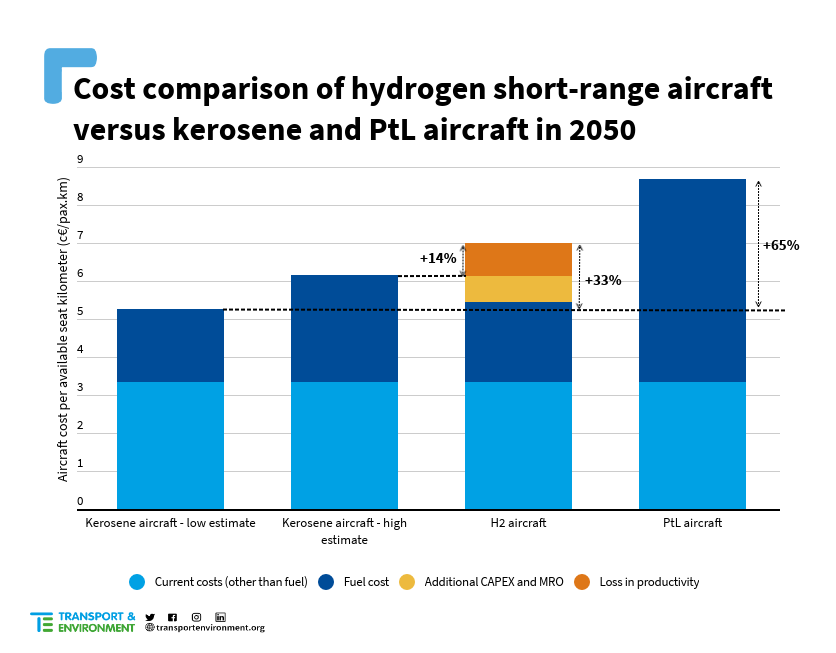 In summary, it most likely can be done, but it would be expensive and would cover only part of the problem.

So, will Airbus hit the EU objective and have a large hydrogen aircraft in the sky by 2035? Probably not. The main reason is that no sensible CEO or board would make the kind of investment needed to develop a speculative new airplane for which no clear market exists – and certainly not after the Concorde and A380. This explains why Airbus talks mostly about what others need to do, such as converting airports and creating a green hydrogen economy.

But that doesn’t mean we should give up. A truly zero-emission solution for aviation is worth pursuing. And who’s to say it can’t be done? We have achieved remarkable technology breakthroughs in the clean energy space recently. So, if this is to be a moonshot project, how do we make it a success?

First, governments should tell the aviation industry clearly that the age of kerosene powered jets will end. Governments are banning combustion engine car sales. They should also ban short-haul fossil fuel powered flights by the early 2030s. This is a sure way to focus the industry’s minds. Rail will be able to replace some flights, but in most instances the only option will be to deploy clean technology; or fuels. At this stage regulators need to keep an open mind. So, if hydrogen aircraft don’t take off, flights powered 100% by e-kerosene, or simply electricity, are a good alternative.

Second, we need to put in place regulations to require and incentivise the use of hydrogen in aviation. The Commission’s aviation fuels regulation should introduce a hydrogen fuel mandate for aviation of 1-2% by 2030 and increasing after that, creating a market for hydrogen fuel credits in the aviation industry. That would benefit not just Airbus but also new start-ups. Remember, Tesla’s rise was greatly aided by sales credits provided by the California Zero Emission Vehicle programme.

Third, we need an industrial strategy to accompany these regulations. Between its Clean Skies Undertaking and Covid recovery funds, the  EU is poised to spend billions on aviation R&D in the coming years. All of this funding should be used to promote zero-emission technologies such as hydrogen or electric aircraft and e-kerosene. And of course, the Commission taxonomy should only recognise zero-emission aircraft as sustainable.

The order here is important – targets, regulations and then funding. Do it backwards, and you pump money into aircraft that no one will buy or operate. Airbus, so confident in their innovation, should welcome such targets and regulations. After all, its motto is: “we make it fly”.