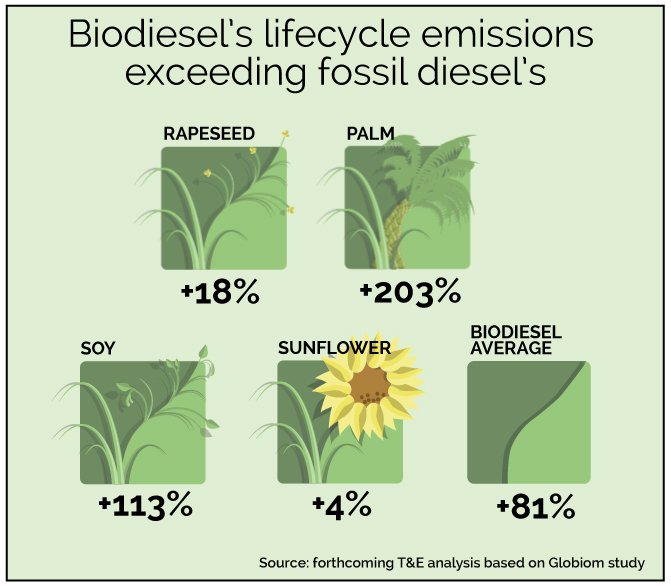 ILUC occurs when the increased consumption of biofuels means more land must be cleared to grow food crops, leading to the destruction of carbon sinks. The latest research assesses the total direct and indirect land-use change emissions due to additional biofuel cultivation to satisfy EU policy. The emissions are up to four times worse than originally feared, according to the study.

The so-called Globiom report, authored by IIASA, Ecofys and E4tech, is the first major Commission-sponsored report on the climate impact of its biofuel policy since 2011. In that year research first confirmed the ILUC impacts of EU biofuels policy and served as a basis for reform of that policy. Last year that 2011 research finally resulted in a 7% cap on biofuels made from food crops in transport fuel.

This latest report was only published after numerous requests for ‘access to documents’ by industry and civil society and was eventually released too late to influence a now-closed public consultation on the EU Renewable Energy Directive.

Now the latest figures indicate that land-use change (LUC) emissions from biodiesel produced from palm oil is responsible for 231 grammes of carbon dioxide equivalent per megajoule of final energy – more than four times greater than estimated just five years ago and 2.5 times the total lifecycle emissions of fossil diesel. LUC emissions from biodiesel from soy are almost three times higher than the previous estimate. Biodiesel made from virgin vegetable oil is expected to have a 70% share in Europe’s biofuel market in 2020.

Overall, LUC emissions from biodiesel made from vegetable oil exceed not just total emissions from fossil diesel but also those from bioethanol. This is largely due to vegetable oils commonly being grown in the tropics, leading to a high risk of tropical deforestation and associated peatland drainage.

The report also finds that energy from plants that are not harvested annually, such as willow, switchgrass and poplar, score far better and even have negative LUC emissions. This is because their roots are allowed to develop and store carbon, meaning that cultivation of these plants typically stores more carbon than leaving the land untouched.

The report will be one of the key documents informing bioenergy policy for the 2020-2030 period for which the Commission is planning a legislative proposal, due in late 2016.