The three airlines have received a third of the pandemic aid allocated to the aviation sector, with no binding environmental conditions. It shows that the EU has still not grasped the need to link rescue packages with building back greener, T&E said. 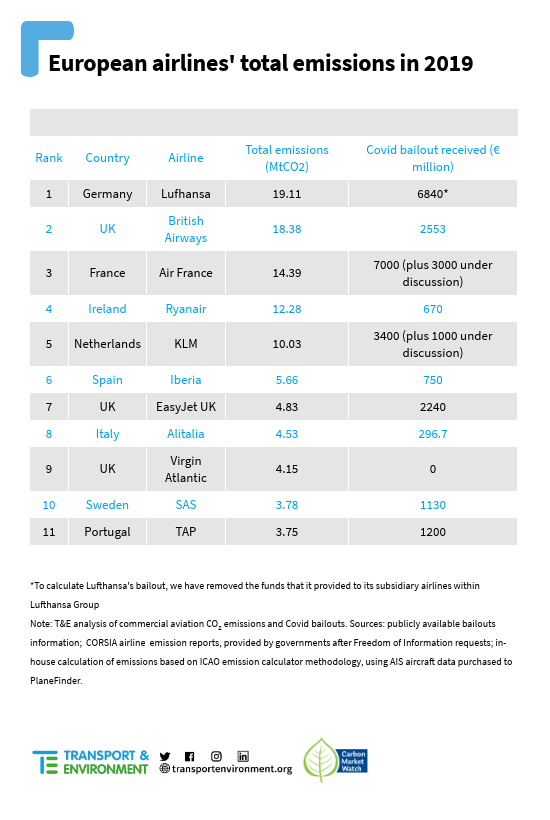 When Europe went into lockdown a year ago, the European Commission announced an aid package for the worst affected industries. T&E and other environmental groups called for all aid to be made conditional on recipients taking action to tackle climate change and other environmental threats, but this was largely ignored. Now, for the first time, total emissions data from airlines have been obtained through freedom of information requests by T&E and a second NGO, Carbon Market Watch, allowing for a proper analysis of bailouts and emissions.

The first ever ranking of total airline emissions has the German carrier Lufthansa at the top with 19.11 million tonnes of CO2, closely followed by British Airways with 18.38 million. Air France is third with 14.39 million.

T&E’s aviation director Andrew Murphy said: “All the talk from Europe’s leaders is of building back greener and the European Green Deal, but these new data show that the need to link state aid to climate action still hasn’t been grasped. The biggest airline polluters are currently at the mercy of government handouts. There has never been a better time to require green conditions as a necessary precondition for bailouts.”

In its latest policy briefing, T&E says no new bailout should be awarded without EU member states first agreeing to an aviation decarbonisation plan.

T&E’s UK policy manager, Matt Finch, said: “If the UK is serious about climate change it must take responsibility for its international aviation emissions and include them in our future climate budgets.”

The new information also reveals the extent to which airlines do not pay for most of their pollution, as flights starting or ending outside Europe are currently exempt from the EU carbon market. In the case of Lufthansa, British Airways and Air France, the airlines do not pay anything for 77%, 86% and 83% of their emissions respectively. The Irish airline Ryanair is the biggest emitter on flights within Europe, but that means it has a much higher share of its emissions subjected to carbon trading (over 80%). 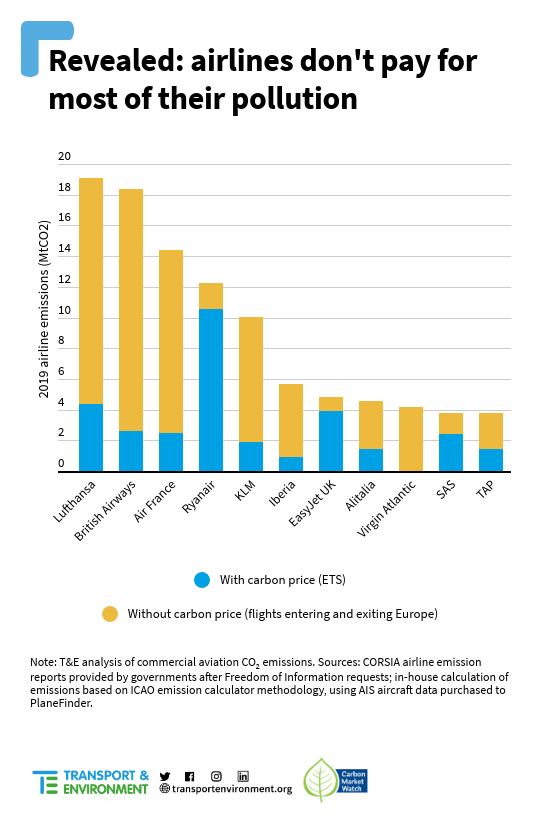 Andrew Murphy added: “Right now there is little incentive for legacy airlines to switch to cleaner fuels as they make most of their revenues through long-haul flights, whose emissions are not regulated. Taxing European airlines’ emissions beyond the borders of the EU would speed up the need to do so.”

In June the EU Commission will say whether flights entering and exiting Europe should be brought under the EU emissions trading system (ETS). It will also propose a law requiring airlines to start using cleaner fuels such as e-kerosene.