Battery powered ships offer the most efficient and immediate solution to decarbonise short sea voyages within the EU. Longer journeys will ultimately require liquid hydrogen and liquid ammonia produced with zero-emission electricity. Powering ships calling at EU ports with a combination of the three would require around 25% additional renewable electricity compared to total EU electricity production today, the analysis finds. This is a considerable amount but still half of what is required by other options like synthetic methane or synthetic diesel. 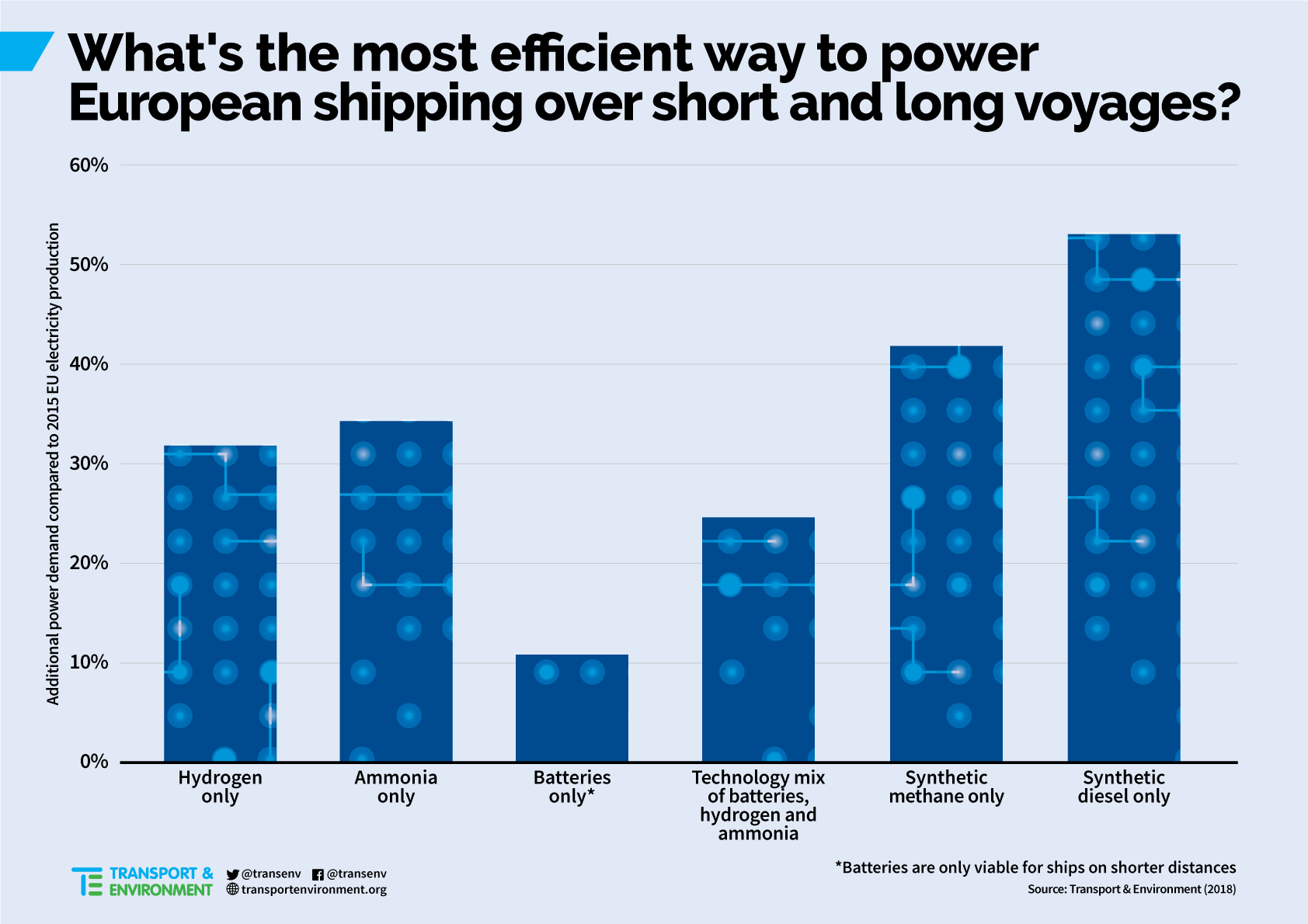 Shipping emits 3% of global CO2 and would be the 6th biggest emitter after Japan if it were a country. EU-related shipping is responsible for about one-fifth of these emissions. The UN’s International Maritime Organisation (IMO) has just agreed a goal to reduce shipping emissions by at least 50% by 2050, but there are no plans to reach zero emissions.

Faig Abbasov, shipping officer at T&E, said: “Shipping is the neglected stepchild of EU climate policy. We need progress at international level coupled with practical steps in Europe such as investment in both shore-side charging stations and the production and bunkering infrastructure needed for hydrogen. A zero-emission shipping strategy in the EU would help cut pollution but also give European companies an edge in what will be some of the most important technologies of the future.”

Smaller ships making shorter journeys within Europe should be the EU’s first target to convert to battery and hydrogen as their renewable energy requirements will be manageable. But often touted solutions such as synthetic methane and synthetic diesel have major drawbacks, the analysis also finds. Their apparent physical properties are similar to their fossil equivalents, making it difficult for authorities to distinguish them and enforce their use. They also require far higher amounts of renewable energy than batteries, hydrogen and ammonia. Moreover, synthetic methane suffers from methane leakage and slip – as does fossil LNG.[1]

T&E said that further investment in gas bunkering infrastructure would lock EU countries into using LNG, which does not offer a path to decarbonisation and in some cases is worse than other fossil fuels.[2] Such investment would also open the way for synthetic methane, which is inefficient and difficult to enforce. The small amounts of biofuels that can be produced sustainably would be better used in sectors which have no alternatives to using liquid fuels, such as aviation.[3]

Faig Abbasov concluded: “We need to avoid wasting lots of time and money on solutions that can’t deliver shipping decarbonisation. The biggest pitfalls are biofuels, which can’t be scaled or enforced sustainably, especially in shipping. LNG and synthetic methane are other dead ends due to methane leakage and enforcement problems.”

[1] Methane has 28-30 times the global warming potential of CO2, and when an engine burns LNG unburned methane also escapes through the exhaust. Methane is also released ‘upstream’ during the production and transportation of fossil gas. A recent US study found methane leakage rates are 60% higher than previously estimated.