One in every 11 cars sold in the EU last year was fully electric as EV sales were boosted by EU CO2 targets for the second year running. Battery electric vehicles had a 9.1% market share, according to ACEA data for 2021. That’s up from 1.9% in 2019 – before the current EU CO2 standards, which pushed carmakers to sell them, kicked in. Green group Transport & Environment (T&E) said that without ambitious EU standards in 2025 and an interim target in 2027, EV sales would lose momentum in Europe for the rest of the decade as carmakers prioritise the recovery of combustion engine market-share. 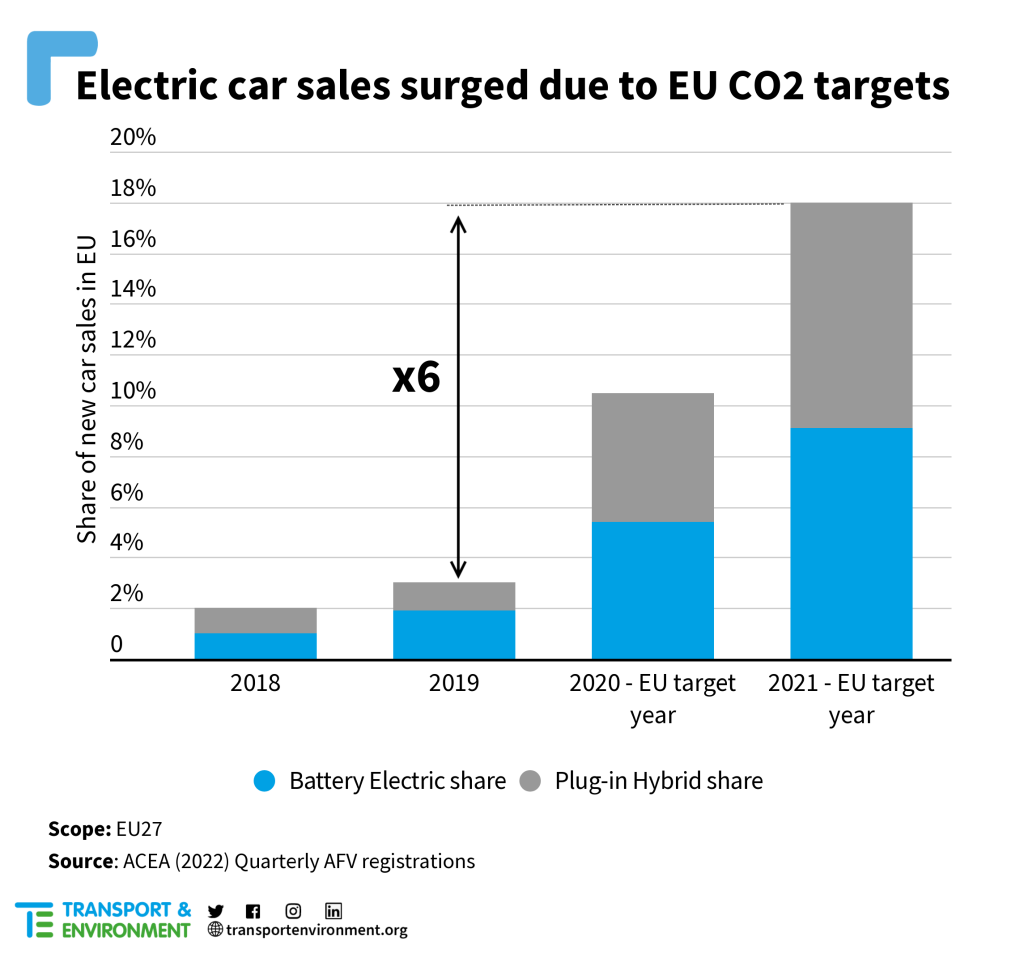 Julia Poliscanova, senior director for vehicles at T&E, said: “The unprecedented growth is undeniably the result of EU car CO2 targets. For years slow EV sales were wrongly blamed on consumers, but now we know that when carmakers bring the models, demand follows. But the regulation takes the pressure off manufacturers this year, so we might see a revival of polluting fossil fuel car sales already. CO2 standards need to be more ambitious and more regular to stop EV sales being relegated to the slow lane.”

The market-share of plug-ins was 18.0% in 2021 – with battery electric vehicles at 9.1% and plug-in hybrid vehicle sales at 8.9%. Their combined sales share has multiplied by six since 2019 in the EU27 thanks to the EU car CO2 standards.

The next EU targets for carmakers, in 2025, are so weak they will be realised two years earlier, T&E analysis shows. Without setting more ambitious carmaker goals from 2025 onwards – including an intermediate goal in 2027 and an 80% car CO2 cut in 2030 compared to today – it will be very hard for member states to reach their proposed national climate goals by 2030. 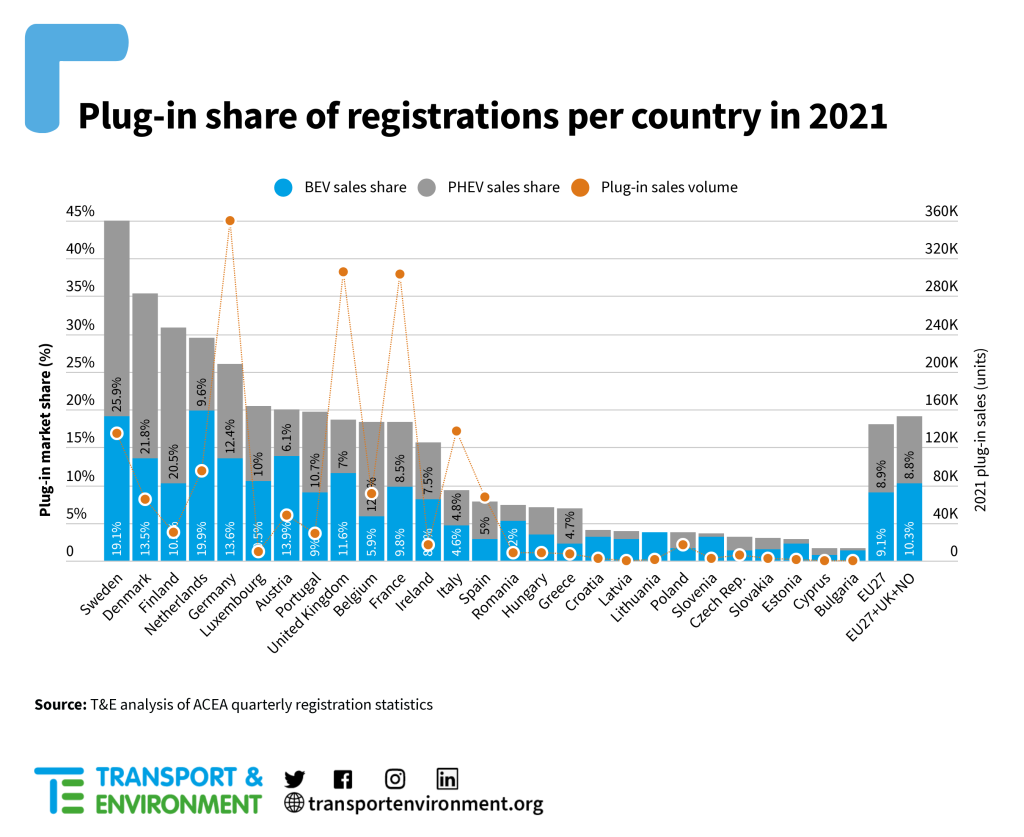 Fake ‘electric’ plug-in hybrids – which, when not charged, can actually pollute more than fossil fuel engines – still dominate EV sales in many large markets: Belgium (68% PHEV share of EV sales), Spain (65%). EU lawmakers have the opportunity this year to close loopholes in the car CO2 regulation that promote sales of PHEVs and SUVs by giving carmakers easier targets if they sell heavier vehicles.

Julia Poliscanova said: “EV growth is actually higher in places like Croatia, Lithuania and Bulgaria than in Western Europe. But the switch won’t happen fast enough on its own. The second wave of car regulations being designed now should require the auto industry to mass produce and sell more, cheaper zero-emission models while the new EU infrastructure law should guarantee a faster and better roll-out of charging to keep pace.”

The diesel market reached a new low with only 20% of cars sales in the EU last year and will keep falling and be overtaken by BEV sales in 2022. Hybrids were 19.6% of sales while other alternative powertrains[2] account for a negligible share of the market (2.8%) with a significant decrease in sales of CNG cars (-21%).

[1] Central and Eastern Europe refers to total sales in Bulgaria, Croatia, Czech Republic, Estonia, Hungary, Latvia, Lithuania, Poland, Romania, Slovakia, and Slovenia. EU 14 refers to the western European countries which were members of the bloc before 2004 (except the UK).