WHAT WILL THE DEBATE FOCUS ON?

Malta’s progress report will be followed by a discussion of the key reforms on the table, namely:

· EU-level tests on cars already in use carried out by the Commission. These new independent tests are the main reform proposed by the Commission and are supported by some countries, including France, the UK, the Netherlands and Denmark. Many others, especially Italy, Germany, Spain, Poland, Czech Republic and Slovakia are opposed, fearing an independent body that could over-rule national regulators and require carmakers to recall vehicles or even issue compliance. The current refusal by the Italian ministry to take action against Fiat despite evidence of emissions wrong-doing – exemplified by our cartoon above – is at the heart of the failures of the current EU type approval system.

· EU oversight of national regulators. The Commission has proposed a system of peer reviews for national authorities to review each other. While such a peer-review system would potentially be open to deal-making, many governments are even opposed to this. MEPs earlier this month strengthened the proposals by turning peer reviews into independent audits carried out by external experts and coordinated by the Commission. A national authority could be stripped of its powers to issue type approvals if serious irregularities are found.

WHAT DO GOVERNMENTS WANT?

Transport & Environment has put together this table to highlight the differences between the Parliament and Council positions. For governments’ individual positions, see unpublished report obtained by BEUC here. 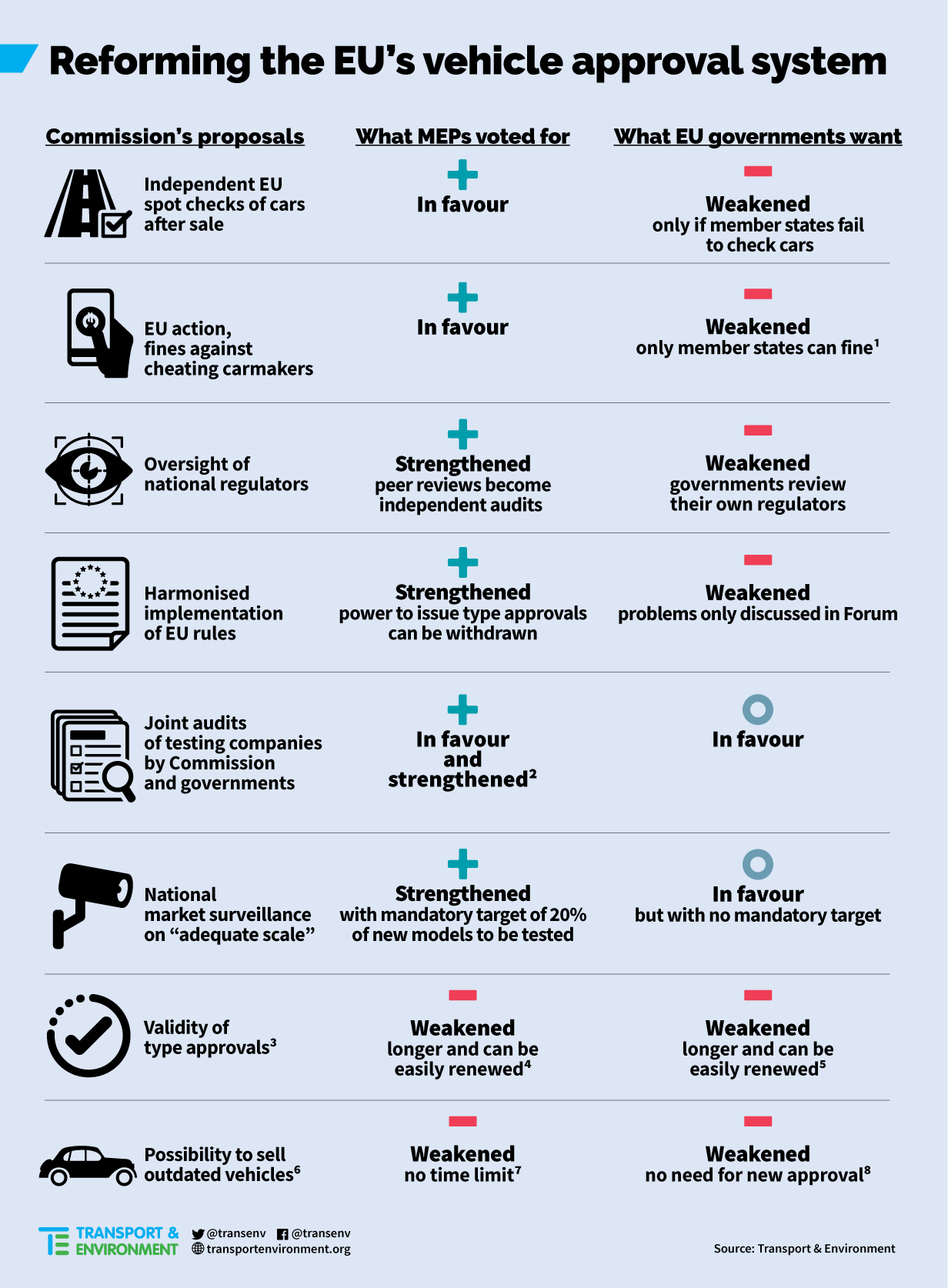 CONCLUSION and NEXT STEPS:

Many governments are choosing to weaken the new regulation instead of agreeing effective post-Dieselgate reform to ensure car makers meet emission standards on the road. According to the European Environmental Agency, 467,000 Europeans die prematurely each year as a result of air pollution, with diesel fumes being a significant contributor. Earlier this week five EU countries – Germany, France, the UK, Italy and Spain –received final warnings before being taken to court for failure to comply with EU pollution limits.

But three of these – Germany, Italy and Spain – oppose the reforms and choose to protect their car industries from effective regulation at the cost of citizens’ health. Unless the rules of vehicle type approval are tightened, the current stalemate on emissions non-compliance and collusion with the car industry will persist. The current case around Fiat emissions in Europe shows what is going to happen with future enforcement and market surveillance if the system is left in the hands of the national regulators.

The plenary of the European Parliament is expected to vote on the type approval regulation in early April, including on whether or not an independent EU authority on vehicle surveillance should be set up. The next Competitiveness Council, scheduled for 29 May, is expected to approve the governments’ position followed by the final negotiations between the three institutions in the second half of 2017.